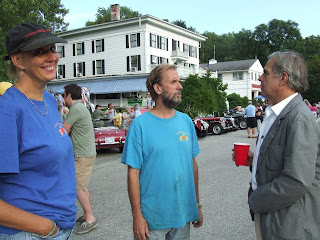 Peter meets Russell Gee at the Falls Village car show, Sept. 2012, in the Battle of the Smart Alecks. Erika can sense the peril.

I first met Peter Brittingham in August of 1998, shortly after arriving at Mountainside for alcoholism treatment.

I was still pretty wobbly. Bruce Drever pointed me in Pete's direction and gave me a gentle shove, and we chatted in the front room before the big Friday night meeting.

"So, what brings you here?" asked this cheerful-looking guy with wild hair and a beard.

"No, that's not it," said Pete, looking me in the eye and grinning. I had trouble meeting his gaze. I thought he was insane, frankly, and that I had stumbled into some sort of cult situation. Soon I'd be wearing an orange robe and banging a tambourine on a street corner.

"You know what it is?" continued this maniac.

I must have looked startled, because he hastened to reassure me.

I used to time my fishing trips on the Blackberry River to finish up in the deep pool behind the house on Lower Road in Canaan. Trevor would come out to greet me, by which I mean bark at me. His nose is good but his eyesight is a little faulty, so I'd be casting by the boulder in that pool while Trevor was diligently barking in the wrong direction.

One warm afternoon last fall I took a couple of decent browns from the run immediately below Pete's pool, and kept them, figuring fresh trout wouldn't go amiss at the Crofut-Brittingham table.

Then I took a really good brown from Pete's pool, on a tiny (size 20) Prince nymph. For you non-anglers, this is a very small hook with a couple of turns of green fuzz on it and a little red tail.

I thought about keeping him too — he was about 18 or 20 inches, a real lunker for a little stream — but decided against it.

Then I clambered up to the yard. Peter was taking the afternoon sun. He looked tired.

I gave him the fish and he cracked a joke about Blackberry trout all tasting like cow shit.

Peter had a quality that my late father had, and that I admire: when he asked how I was doing, he was truly interested in my response.

He was blunt, vulgar and occasionally offensive; he possessed a true intuition about his fellow alcoholics and addicts; he gave of himself freely, and had a damn good time doing it.

Even in the last few weeks, during the meetings at his house, his spirit was undaunted.

That spirit will live within the countless people he helped — especially those of us who were lucky enough to get cussed out by Peter at particularly jittery moments in our lives.