Memorial Day 2013 — horrible fishing weather, the return of Roman Polanski, and the reappearance of Ernie Witherspoon

It started raining big time Thursday, May 23, as I drove from Lakeville, Conn. to Phoenicia, N.Y.

I thought I had outridden the storm when I crossed the Hudson, but no. Another, larger storm was brewing to the west.

It was very jolly, the next couple of days. It rained more or less constantly for about 36 hours, and it was about 45 degrees outside. On Friday, the water temperature was 10-15 degrees higher than the air.

I kept the same two flies on my six-weight because my fingers were too numb to change them.

This did not deter me from fishing. I landed this holdover brown in Woodland Valley. Note how he fills the giant landing net. I think he'd top 25 inches if a) I had a tape measure and b) my fingers were capable of using it at the time. 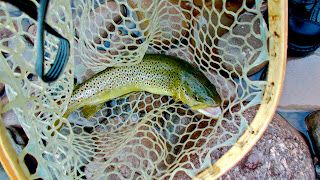 The Esopus Creek and tributaries are clearing much faster than I thought they would. My little brook, the Pantherkill, was clear as a bell opposite my house Saturday morning after a night's steady rain — until I found this a little way downstream: 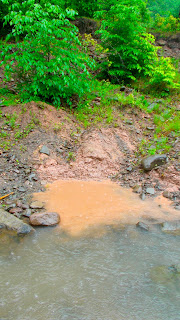 There are two of these open clay banks on my property, so I could do something about them — namely, plant willows.

Earlier that week I watched an intrepid bait fisherman edging along this rock formation on the Blackberry River in East Canaan, Conn.

That rock is slippery at the best of times, and with felt soles. Never mind just after a storm with rubber muck-out boots.

Mr. Worm Fisherman looks a little like Roman Polanski, at least from a distance. I notice these things. 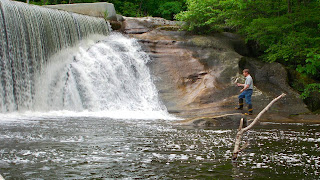 Finally, I solved the mystery of "Whatever Happened to Ernie Witherspoon?" He was eaten by bears, and knowing Ernie as I did, my anxiety is reserved entirely for the bears. 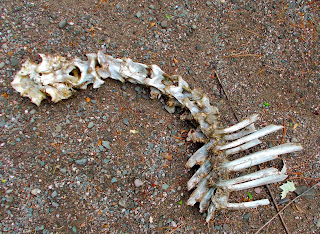