Smallmouth City, or Where Did the Trout Go?

The largemouth bass fishing on Mt. Riga hasn't been very good this year, in part because the lake was drained down in May to allow work on the dam.

So my usual summer m.o. of floating around the lake with the transistor radio, listening to baseball and hauling in lunkers, has not been as much fun.

The Housatonic River, one of the weirdest waterways in my experience, is a premiere smallmouth bass fishery in the dog days of summer, when water temperatures get up in the 70s and the trout go on what must be the worst vacation ever.

Forced to choose between breathing and eating, they opt for the former, and hunker down during the daylight hours. I suppose you might get somewhere trout fishing in the Housatonic at 3 a.m., but somehow that prospect doesn't appeal to me.

So this year I have been targeting smallmouth bass on the big river, and after a few false starts I have been moderately successful.

Dead-drifting a streamer the same way you would a nymph is a winning tactic, as is a more traditional chuck-it-and-chance-it approach with streamers, poppers and big nymphs.

The smallmouth have a definite attitude, and are not nearly as gullible as their largemouth cousins.

Now that the evenings are cooler, and the water temperatures have dropped, toward evening some trout are back in the mix.

Tonight I fished at The Elms, which sounds like a Borscht Belt resort but in fact refers to a section of the river, accessible from both sides, where there are — get this — elm trees.

The first couple of hours, from 4:30 p.m. to 6:30 p.m. or so, were marginal. A handful of small smallies came to the net, lured by the isonychia nymph.

Trout like it too. As it began to get dark a rainbow took the nymph. I could tell it was still tired from vacation, because it made only desultory attempts to escape and, when netted, gave me a "death where is thy sting?" sort of look.

But about 7 p.m. all hell broke loose, when a dark mayfly began hatching in prolific numbers. I saw this the previous evening, and didn't have anything like it in the fly box except for a bedraggled Adams, which worked after a fashion.

Tonight, however, I was prepared with blue wing olives.

I got one chub (annoying), two more rainbows of respectable size, and probably 15 smallmouth or increasing size until it got too dark to see and the rain that had been threatening all day finally erupted.

A good night by any measure.

Smallmouth taken Sunday at the Garbage Hole, on a Little Rainbow Trout streamer 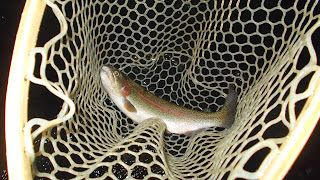 Rainbow taken Monday night at The Elms, which does not take reservations 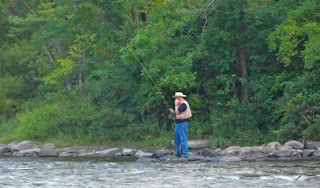 Man taking a phone call Sunday at The Elms. He kept casting. "Yes, dear. What, dear? Certainly, dear." Wrong on many levels. 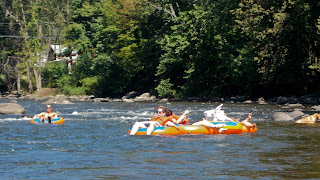 These tubers at the Garbage Hole Sunday were traditionalists. They had a tube dedicated to the beer cooler. 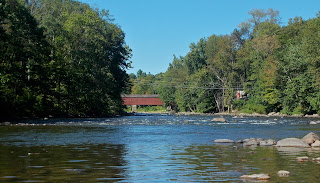