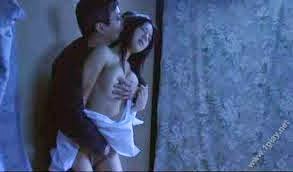 A gang of five guys, dressed unconvincingly as women, knocks off a bank and gets away with a big sack of cash. They drive up to an abandoned house to wait for a confederate to take them to a boat. Then they're going to sail somewhere.

But dang. There's a semi-fresh girl messing around by the side of the road, so for no apparent reason they stop, she sees the money and guns, and so now they have to bring her along.

Oh yeah, she came out of the ocean, nekkid, in the first scene of the flick.

Tedious "Treasure of the Sierra Madre" thieves falling out stuff ensues, except in this case they are all looking to cut themselves a slice of the siren girl.

Bottom line, she kills them all, but they die happy.