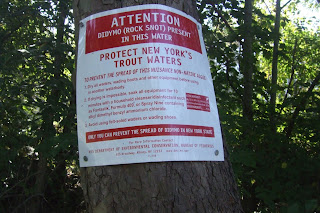 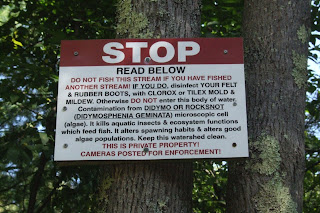 I took my week off and headed for the Catskill camp, in Phoenicia, N.Y. I have nothing but good news.

First off, the heavy rains earlier this summer seem to have done a number on the rock snot (didymo, a nuisance algae that is popping up in Eastern rivers).

Dave Kumlien of Trout Unlimited told me back in May that while there is no remedy for rock snot, it doesn't fare well in cold water and in high flows.

The Esopus Creek downstream of the Portal (which carries water destined for New York City) certainly has high flows of cold water. And all the rain helped too.

In any event, at Boiceville and off Herdman Road in Phoenicia, where I saw the stuff in abundance in early May, I didn't spy any at all.

And the state finally got its butt in gear, too, with new signs warning of didymo. Previously one private individual had made signs at his own expense and stuck them up here and there.

I fished in the Woodland Valley Creek, both the public and private areas, and the Esopus above the Portal, and saw no sign of rock snot anywhere.

Which does not mean we are out of the woods. After an unsatisfactory experiment with rubber wading boots combined with Yak-Trax (the add-ons fell apart rather promptly, they are not designed for clambering around rivers), I am designating one set of waders and felt-soled boots for the areas of the Esopus known to be infected, and one mangier set for everywhere else.

And I still hose everything down, dry as thoroughly as possible, and give everything a blast of Tilex Mold and Mildew. 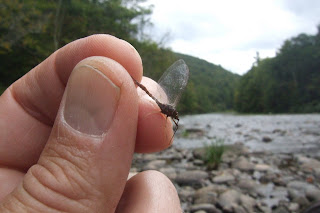 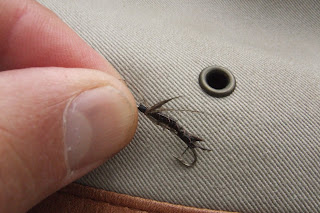 Separated at birth?
The last two days were warm, humid and mostly overcast. This combination convinced the bugs it was still summer. They in turn inspired the trout.

Fishing the most plain-Jane soft-hackle wet fly in the box, I caught trout after trout in the big river these two days, mostly just downstream of the Emerson complex in Mt. Pleasant. Plenty of the small-to-medium rainbows the late Paul O'Neil loved to write about (and eat) but some bigger bruisers as well.

The Esopus is, at heart, a wet-fly stream, and sometimes I forget. Especially with the soft-hackle flies, the Western Swing* approach works in the long riffles. 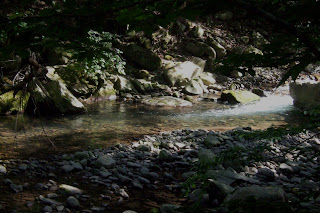 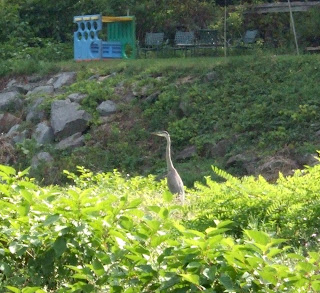 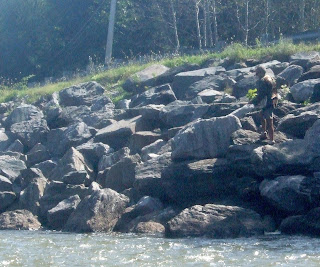 As Austin Francis points out, the Esopus is an egalitarian stream. Here is a salmon-egg dapper in action. 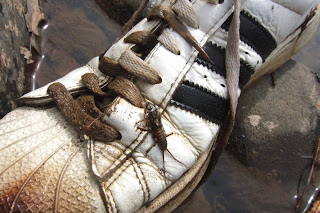 There should be a way to incorporate this into an ad — but for what?

* Western Swing — Cast wet flies or nymphs at a 3/4 angle upstream, mend as needed for a dead drift until it passes you, and then allow the line to go into a full swing. Repeat two or three times with successively longer casts. Then wade upstream — three steps up, one out — and repeat entire process. Your hits usually come at the top of the cast or on the swing. For multi-fly rigs, using a bushy dry fly as a top fly/indicator is acceptable; using a strike indicator is not. Doing it completely by feel, with a single fly, is the ne plus ultra.
Posted by Patrick at 12:23 PM

I have always wanted to trout fish. I have been in the Northeast and Canada several times, but never have had the chance to fish for the trout. It is on my " to do " list before I pass. I am envious of you in the Northeast who have the opportunity to do so.....Then again, you probably wish you could on a regular basis fish for largemouth bass like we have here in the South....And bass is tasty with a few fried potatoes and hush puppies.

Ahh, I am blessed many times over. I get to fish for largemouth (and bluegill, pickerel, and perch) from ice-out until late October, when being in a boat on a lake isn't much fun.