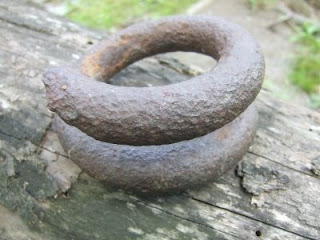 This is a tentative list of the greatest CACA flicks of all time. By "greatest," of course, we mean "worst."
I compiled a top ten exploitation flicks list in October 2010. Looking back, I see some significant omissions.
So rather than a Top Ten, let us proceed with the movies that are of lasting value — of such unredeemed awfulness that they will endure forever, and thus earn — The Iron Coil.
I Spit On Your Grave. Made in Kent, Conn. for $11.87. A valiant, doomed attempt was made to recast this as a feminist film, because the grave-spitting is done by the female lead, with good reason. Nice try.

Make Them Die Slowly. The ultimate "Stupid White People in the Jungle" flick. If "Survivor" had anything to do with reality, never mind justice, it would look like this.

Deathstalker II. Sword and sorcery epic, with an evil, yet gay warlock — Torxartes. In II he is played by the immortal John Lazar; in the original Thom Christopher (who occasionally shows up on the various Law & Orders) combines gay warlock with Gloria Swanson.
Freaks. Tod Browning's 1931 circus geekfest anticipates reality TV and gave the Ramones their "Gabba Gabba Hey" chant. The film effectively ended Browning's career.

Basket Case. A "Freaks" for the 1980s that also captures pre-Disney Times Square. Joe Bob Briggs said that Belial, the monster, looks like "a squashed octopus," and you can't get much more evocative than that.

Zombie Lake. This gets the nod over "Shock Waves" in the underwater Nazi zombie category with its tender love story and nekkid volleyball. And there's an underwater shot of passing gynecological interest.

Bloodsucking Freaks. The flick that gave us the deranged midget Ralphus and a renewed appreciation for the techniques of modern dentistry. Also a textbook example of using footage from an Italian police procedural to pad out your tale of the macabre.

Evil Dead II. In which the hero, with a new group of dopes, goes to the exact same cabin and reads the exact same words out of the exact same Book of the Dead — and is then surprised when the forces of Hell are unleashed. Again.

Night of the Living Dead. For pure horror nobody has ever come close, certainly not director George Romero in his innumerable rehashings of the subject.

Ilsa: She-Wolf of the SS. If you wish to alienate someone forever — someone normal, that is — show her this film. There are moments when you think it might degenerate into a harmless bit of kinky softcore, but it quickly reverts back to its majestically perverted glory.
And some new additions:
Sharktopus, Beyond the Valley of the Dolls, — ok, I ran out for the moment. I'll be back...
Let Sleeping Corpses Lie
Posted by Patrick at 8:36 PM