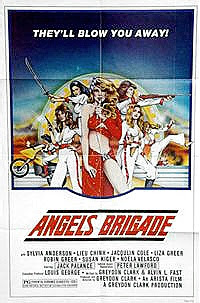 Angels' Brigade (1979) is a real Pure-D piece of dreck that features several character actors at the end of their careers and at least as many breasts. All are fully-clad - character actors and breasts - which is a mixed blessing.

The movie, directed by Greydon Clark, also illustrates the good common sense of the old saying: "Never thrust anything that comes from a man with two last names."

The plot runs like this: After a schoolboy gets roughed up by the winner of the World's Most Obvious Drug Dealer award, his teacher decides to take action and rid the school of the scourge of illegal drugs.

So she forms a working group of concerned parents, teachers, community leaders and law enforcement officials and...

Nope. Sorry. What she does is recruit a disco singer from Las Vegas who in turn knows a whole bunch of other women who just happen to look good in jumpsuits. They buy a van and a motorcycle, steal a bunch of guns and ammo from Jim Backus and his merry band of right-wing nuts, and take it to the drug baron (Peter Lawford) and his evil Number One (Jack Palance).

Along the way they encounter Alan Hale, Pat Buttram and Arthur Godfrey (as himself). 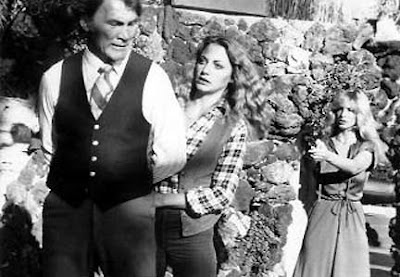