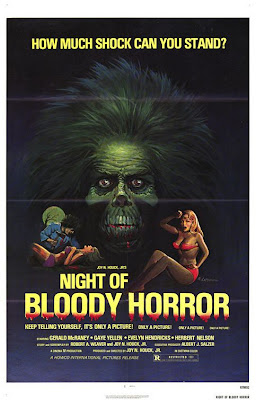 Night of Bloody Horror (1969) is a relentlessly rotten flick that proves once again that the most dangerous thing a young woman with a beehive hairdo can say to a supposed homicidal maniac is "Boy, you're touchy."

Gerald McRaney, an actual real actor who makes a living, and who starred in the relentlessly rotten TV series "Major Dad," plays Wesley, a skinny dork with a bad temper, a history of mental instability and no pugilistic skills.

Wes lives with his weird mother and farts around in the back yard when he isn't having psychedelic migraines and getting his caboose kicked in saloons.

When his lady friends keep turning up in bloody chunks suspicion naturally falls on Wes. It's not fair, but since Vietnam, what is?

The whole thing is, as the boys at Cahiers du Cinema used to say during the Golden Age of film criticism, "excitingly underexposed."

The cops don't arrest Wes, for no apparent reason. They also don't have southern accents, despite being in New Orleans. Nor do they have the New Orleans accent A.J. Liebling described in The Earl of Louisiana:

"There is a New Orleans city accent . . . associated with downtown New Orleans, particularly with the German and Irish Third Ward, that is hard to distinguish from the accent of Hoboken, Jersey City, and Astoria, Long Island, where the Al Smith inflection, extinct in Manhattan, has taken refuge. The reason, as you might expect, is that the same stocks that brought the accent to Manhattan imposed it on New Orleans."

No, these cops just sound like ordinary shlubs, and while this lack of verisimilitude would kill lesser films, "Night of Bloody Horror" survives, in part because of some excellent axe work, in part due to the psychedelic freakout scenes, and mostly because of the splendid bar scene featuring a band called "The Bored."

You have to rent this flick just to hear The Bored and witness the authentic bad Sixties dancing.

Two and a half coils.