Bruce Campbell as Elvis Presley and Ossie Davis as John F. Kennedy in Bubba-Ho-Tep. If you show this film to the family it could lead into an interesting and highly educational discussion of these American icons.

And Ken in Amenia, N.Y. asks, "Hey, are there any drill-bit killer flicks appropriate for family viewing?"

Ken, do you see that van down the street? The one with all the aerials? They're going to answer your question.

But Ken got me thinking - are there enough trashy films available to give everybody a laugh and not get too deep into your typical "half-naked killer nun armed with large power tools defeats forces of Satan at exclusive haunted prep school" scenario?

Of course there are. I give you: 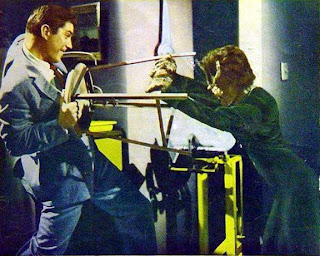 Roger Corman's The Wasp Woman: "Okay, honey! You go ahead and run for PTO president! I'll make the Belgian waffles!"