I finally got around to seeing the weird sci-fi epic District 9.
I appreciate the fact that it's a film in which the special effects are secondary to the story, but the story didn't cut it.
This whacking great ship appears over Johannesburg and when the South Africans get up there they wind up rescuing a bunch of creatures who look like giant prawns.
And these things aren't all that bright, it turns out, so the South Africans herd them into District 9, a massive shanty town a la the bad old days of apartheid.
And this doofus Wikus, working for an evil multinational corporation, is in charge of evicting the prawns and resettling them elsewhere.
Wikus has the worst luck of anyone, however, so he just happens to stumble on to the one smart prawn, who has been distilling some fuel to lift his secret spaceship up to the mother craft. And Wikus manages to squirt the stuff on himself, and thus starts turning into a prawn himself.

Wikus, Prawn-Man and All-Around Unfortunate Guy
And then the story just breaks down and turns into a hybrid chase-wronged man-buddy scenario that just isn't all that interesting, even with all the giant critters clicking away.
Lots of explosions. Evil corporate henchmen. Evil Nigerians. Some sort of deep meaning that remains obscure. No nudity, unless you count the prawns. Ultimately tedious.
Two coils. 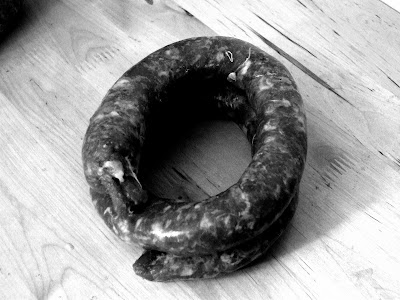 I really enjoyed this film. It is an indictment, I think, of the agenda of international "human rights" activists, Multi-Kult militants, and immigration advocates. An agenda, I might add, that is aggressively pushed by Western governments at this time. Pay attention to this movie and in particular the conditions in Johannesburg city. It is a glmpse of our future in the West.

Patrick, you are probably the only reviewer out there who didn't like this movie, but I think it was inevitable that it wouldn't live up to it's hype.

Regarding the post by Laguna Beach Trad, I think the "world" envisioned in Children Of Men was more likely our future.