The Hanging Gardens of Red Rock 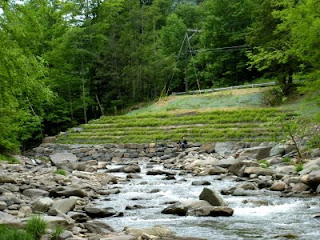 The Hanging Gardens Look at Red Rock
Returning to the Woodland Valley brook always means finding something different, but in recent years, between Mother Nature and various state agencies, Woodland has undergone massive makeovers.
The good news is that the Red Rock pool survived. The chute that runs into it is intact, and if we lost a little space on the road side, the retaining wall creates cool, deep cover for trout during the dog days of summer.
The bad news is it's easy and inviting to get down there from the road; I have already seen worm-drowners perched on the wall. They were hipsters, though, so maybe it was a one-shot deal. I know they were hipsters because a) the car had a vanity plate for an art gallery — also promoted by a sticker — and b) the male half of the sketch was wearing a stingy brim straw hat.
Re-exploring the brook in the spring is like arriving at your favorite golf course, only to find it completely remodeled. Except, of course, that streams get redone by floods and men with machines, which is right and proper and manly, and golf courses are playpens for the pampered. I hate golf. Lacrosse, too.
Anyway — the pool across from the Roxmor entrance was also given the retaining wall treatment, with good results; a stream shift from last year plus a tree down has created a very tricky and deep hole downstream from Nakamoto's; road improvements above Red Rock led to disimprovements in the stream above Red Rock, which used to have a series of deep pockets that are now mostly gone, along with the streamside cover.
The weekend of June 3-5 I fished the brook pretty hard. The stocked browns in the Roxmor and Red Rock pools would take pretty much anything Saturday morning. Sunday morning they were slightly more selective.
By the following weekend the fish that remained in the obvious pools were far more finicky, and the fish had spread out. I caught them in the pockets between Nakamoto and Roxmor, and again in the very last stretch of the stocked water — both shaded and squirrelly areas.
So all that's good. The bad news is that didymo (aka rock snot) was spotted in the lower part of Woodland Valley last summer, which means that guys are not paying attention and streamhopping in the same gear they use in the Esopus.
I know it's a pain and runs into money, but I have repaired and rehabbed waders and boots so I have clean gear for any body of water I'm likely to fish. I dry everything out thoroughly as well — in the sun.
If nothing else, keep a bottle of Tilex Mold and Mildew in the car and give your stuff a squirt before you go in. 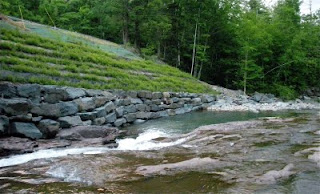 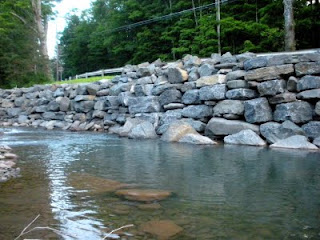 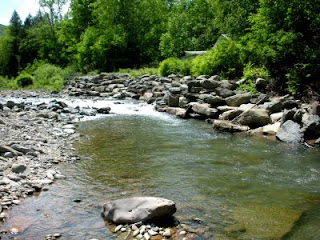 Below Nakamoto's — upstream and down, where the deep hole under the tree is. Combination of tree, depth and fast current makes it hard to get a nymph in there. 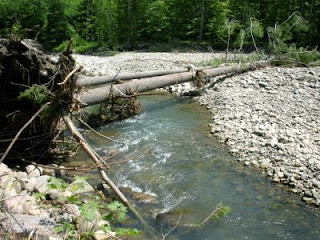