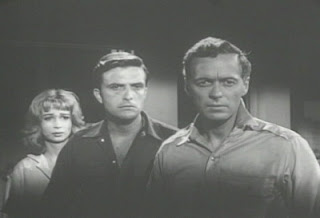 That's what I was thinking when I fired up "Night of the Blood Beast" right after watching "The Devil's Partner" again.

I was enthusiastic about the latter a couple years back (click here) and was glad to see him in this Roger Corman spectacle, about stupid scientists who send people up into orbit in motorized soup cans and then bitch when parasitical aliens attach themselves to the astronaut.

The aliens look like seahorses, incidentally, when viewed under the fluoroscope — sort of a self-powered X-ray machine, with extra radioactivity.

Ed's role as Dave isn't nearly as demanding as his double role as Nick/Pete in "The Devil's Partner." For one thing, Dave doesn't have to do a transformation scene into an old man with wild, John Brown hair.

No, Dave just has to clench his jaw, look determined, and ignore the photographer girl's big butt.

It is big, too. No getting around it.

I noticed her butt because I always notice girls' butts, but also because the flick was pretty interminable. Dead scientist, renegade blood cells, monster that looks like the cast-off bits of all the monster costumes in history.


So I cannot get excited about "Blood Beast" at all. One coil, and that's a gift. Even with Ed Nelson, who according to Wikipedia is still around, living in Louisiana. 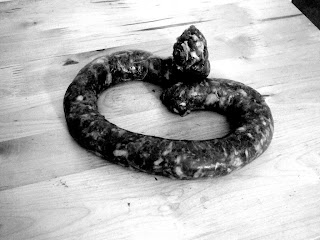