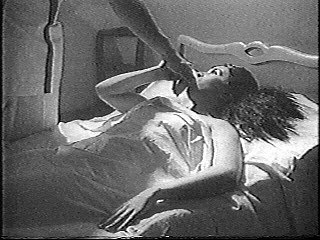 Humpp's bedside manner.
Something Weird knocks one out of the park with the release of "The Curious Dr. Humpp," a Uruguayan masterpiece by the immortal Emilio Vieyra.

Dr. Humpp is an above-average mad scientist, taking his orders from another mad scientist's brain he's got in a big mayonnaise jar. (See "Hitler Under Glass," reviewed here in Oct. 2009.)

He needs to extract some fluids from fornicating couples to nourish him (he starts to decay without it) and also to rule the world.

The doc says some great things, including this chestnut: "Sex dominates the world... and now I dominate sex!"

Catch one of yer high-falutin' Shakespeare wannabes cranking out a line like that.

"I've got this great idea for a band — we'll call it Devo."
So a reporter looking into things gets kidnapped by a big guy wearing a sort of bird mask, fed an aphrodisiac and has to have sex with a pretty nice-looking gal. Meanwhile the cops run around in circles.

Both the reporter and the head cop wear nice vintage sport/suit coats with a high roll three-button and skinny lapels. They probably wouldn't have to be kidnapped by a sex-crazed mad scientist to get some, but that's how it goes sometimes.

Belated Academy Award nomination for Dr. Humpp saying to the nurse: "Put the hippies in one room. Let them keep their marijuana. Oh, and put the lesbians in the same room too."

An incredible find that goes on the CACA All-Time list. Four coils. 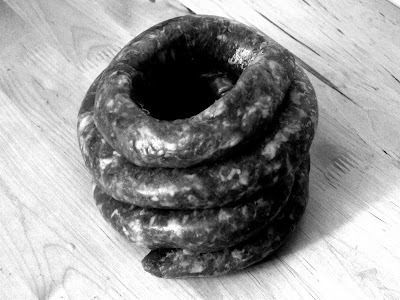 Labels: No Commercial Appeal, The Cinema

Another great review, Patrick. I must start finding copies of these films. I get the feeling that I'm missing out on something that I would like very much.