It rained the night before and the river down by Mt. Tremper looked very murky when I drove by, so I didn't have very high hopes for the Esopus.

But up at the angler's parking area by the Shandaken cemetery, the water was perfectly fishable, albeit a little murky. Irene played merry hell with many areas, but so far I have to say the storm's effect on fishing has been good, to the extent that my two main streams — the Esopus and Woodland Valley — are in better shape now than before.

But the far side of the river, which is really now the main stem, is just fine. And as you make your way upstream, the vegetation crowds the river and makes an ideal situation for fishing hoppers.

Which I did, all day. Caught brown after brown, most in the 10-14 range, but hooked into a couple significantly larger. Kept one — that's about the median size (12 and a bit).

I probably caught 20 fish all told, in two sessions, morning and mid-afternoon. 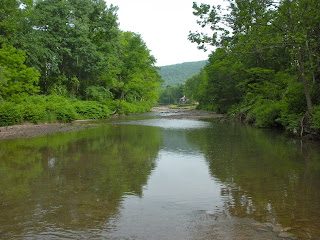 The first run as you come down the path is much reduced. 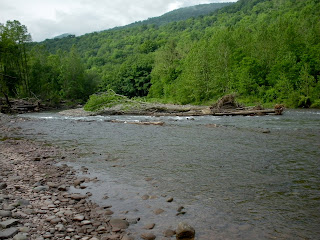 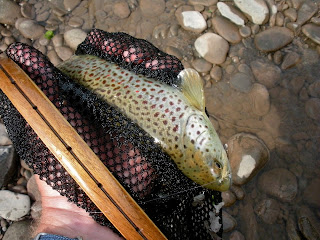 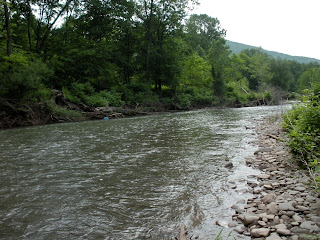 View looking downstream about 150 yards from entry. Far right in distance is smaller gravel bar by entry. Soft-hackle wets with a Davy Wotton-style drift were very effective in here. 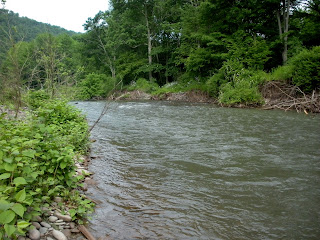 A little further upstream, in hopper territory. You can stand on the shore and flip them straight ahead. Lots of trout holding close to the bank. Very similar to mountain meadow streams in the Sangre de Cristo and jemez mountains in New Mexico. 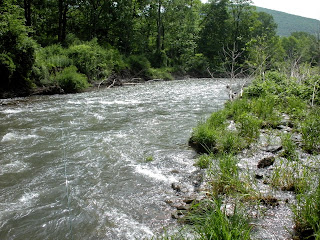