Botchford Pool — The last flood reduced this once-productive pool at the beginning of the fly-fishing only stretch to a couple of puddles and minor riffles. Now it's as if it's been given an enema. (Sorry, I had my first colonoscopy recently and the memory is vivid.)

The pool runs all the way up to the rise in gradient now, through the same sort of shelf formation as Red Rock.

The whole stretch is now a great place to give casting lessons.

I caught three browns in the 12-14 inch range. Long jaws, all their fins, with a lean and hungry look. They took stonefly dries (fished in the film) and a size 14 olive caddis emerger. I kept one for scientific purposes. It was delicious. 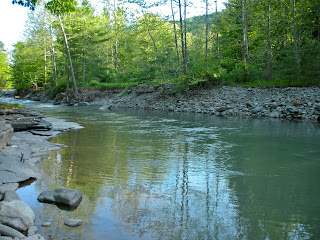 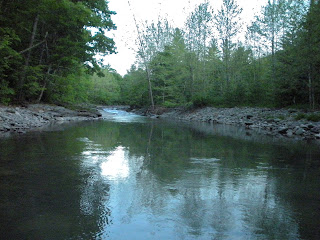 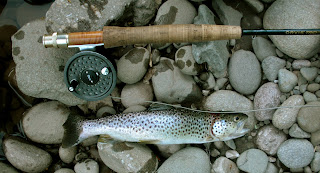 I did not fish the next stretch, between Botchford and Nakamoto.

Next went in at Nakamoto, where the stream is a good 150 yards from where it used to be. I was dubious but it's fine, some nice pocket water and a couple more of these rangy browns there. Also an easy drive or walk for stocking purposes. 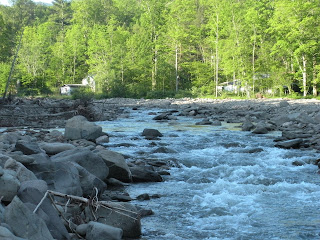 Upstream from there, below the Roxmor pool, and just downstream of where the stream takes a high and low road, there is an actual swimmin' hole with a sandy beach. I propose it be named the Chili Allam Memorial Beach for the time being. 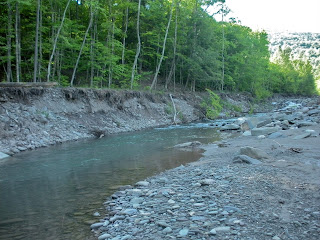 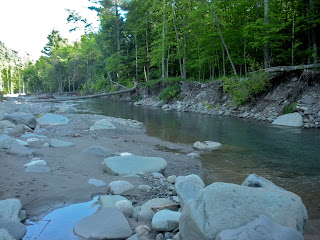 The low road has some deep plunge pools and will hold bigger trout. The high road has much less vegetation along the banks, which is a shame because flipping a wet fly under the trees used to be a productive endeavor. 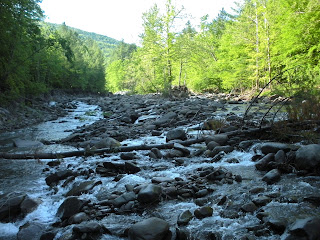 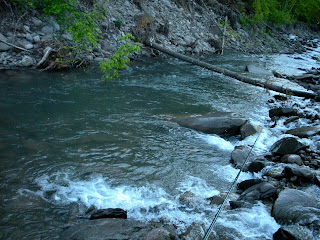 Roxmor pool is much the same, albeit a little less cluttered, and the plunger pools running upstream are about the same. Very high, exposed banks here; when it rains hard the stream will be the color of Yoo-Hoo in no time. 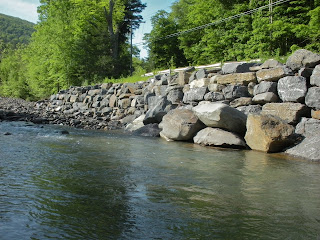 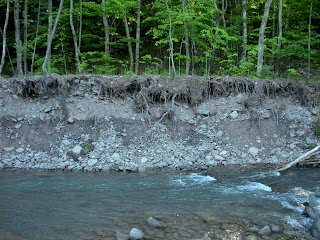 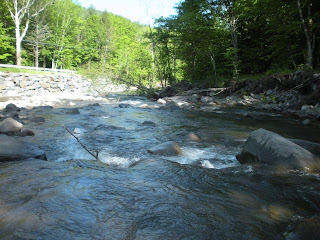 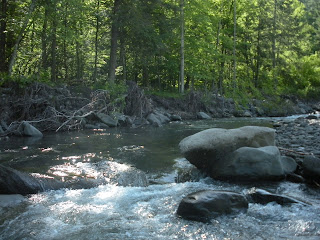 The path from the road to the stream needs work — not the path, but the area where it comes out on the stream. I have a chain saw.

Upstream of that the series of boulders, eddies and deep pools that used to lend themselves to serious nymphing, or even working a small bucktail around, are all gone, and it's a straight shot, extended riffle sort of thing. With improvements on the stream side it's easy to get down (for stocking purposes). 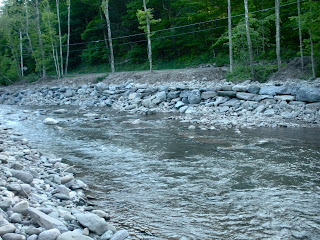 The retaining wall pools are mostly gone, ad it's a lot easier to approach the plunge as a right-hander casting upstream from the right bank. 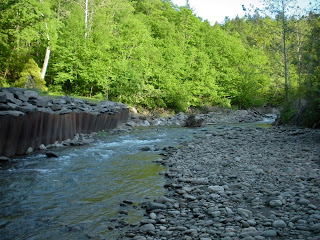 A sharp left turn that used to yield a fat brownie lurking under a rock is gone in fact but not in spirit. The lair isn't as good, but the trout still seem to think that hanging out on a sharp curve, like a state trooper behind on his speeding ticket quota, is a good idea. 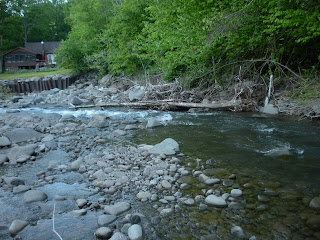 In the approach to Red Rock, the sort of welcoming portal at the tail end of a series of plunge pools is gone. The pools themselves are consolidated into one run now. When I got to Red Rock at about 7 p.m. Sunday three or four goodish browns were taking something off the surface with great gusto. I threw things subtle and gaudy at them for a solid hour and only hooked one, so what they were taking remains a mystery. 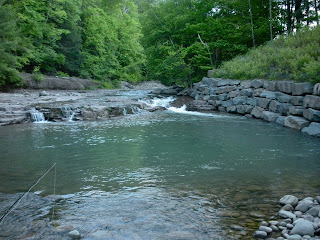