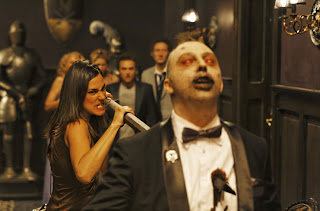 Vampire Party (2008) is a vampire flick with young people in it that has absolutely zero angst.

And what a relief that is.

Sam and his two pals Prune and Alice are party animals. They finagle invitations to this infamous Medici Night party, held in a castle accessible only by helicopter.

That's the good news. The bad news is the party is for vampires, celebrating some similar night in the 14th century where one of the de Medici gals arranged with the local bloodsuckers to wipe out a few thousand Protestants.

So it doesn't take long before mayhem breaks loose.

Thank God the directors don't try to explain everything. Instead they go with silly sight gags and bad jokes, rendered worse because this is a French flick. 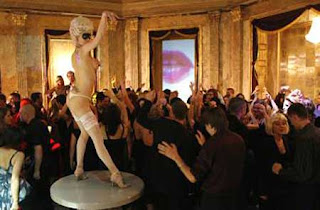 One of the two breasts featured in Vampire Party.

Light-hearted and short, this is the perfect antidote to the ghastly "Twilight" nonsense.

Four coils, and a nomination for the iron Coil list
Posted by Patrick at 12:04 PM