The stoneflies are out on the Housatonic, causing great excitement among anglers whose brains have turned to soup after a winter of pretending to be interested in basketball, hockey, and a proposed code of ethics for the town of Salisbury, Conn.

I headed out this morning, feeling pleased with myself since I had a) remembered to change the clocks to daylight savings time and b) because last week's snow was melting at a nice, steady rate and c) because we have some year-round streams around here, so no need to wait for the statutory "Opening Day" of trout season and d) because I CAN'T TAKE IT ANYMORE!

After stopping to get a sandwich and two Snickers bars (which with a box of Band-Aids constitutes my emergency kit), I thought, "Let's just head up the mountain road and see if the brook looks fishable."

And it sure did.

Reasoning that if it was a washout I could still get to the big river and get in a couple hours flinging stonefly rigs, I suited up, ducked in, and plopped a size 12 red Humpy in a likely-looking spot.

I switched to a stimulator, thinking if stoneflies are on the big river they would probably be here too. (I was ignoring the total lack of said stoneflies on the rocks.) That got a couple of looks, but no dice.

I then tied on a piece of tippet to the bend of the hook and played around with a Prince nymph (one tug), a stonefly nymph (crickets) and a succession of soft-hackle wets in different colors (yawn).

This was not a total loss. The day was warm, the shelf ice not as treacherous as it will be in a week or two, the cigar was fresh, and I was treated to the sight of a cross-country skier, so intent on his mysterious exercise that he failed to see me from 15 yards away. He was accompanied by three rambunctious dogs of indeterminate breed, who definitely saw me.

Finally I tied on a crackleback fly, which is all hackle and marketed by an outfit in St. Louis as being the absolute best super-duper all-round fly for when nothing else works. I have never caught anything but a stick on these things, but today it netted the first trout of the nascent season, a skinny little brown trout with beautiful markings and a surprised expression.

I caught two more browns and one brookie, which is what I was really after. The state used to stock this brook with browns, until wiser heads prevailed and it was reclassified as a wild brook trout stream, no-kill, single barbless hooks only. That was several years ago, so where these browns came from I don't know.


Four hours passed quite happily, and I didn't even fall in. 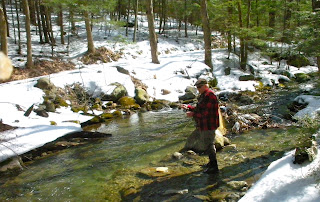 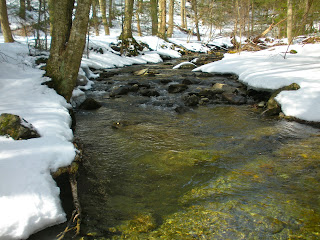 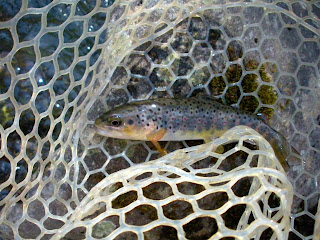 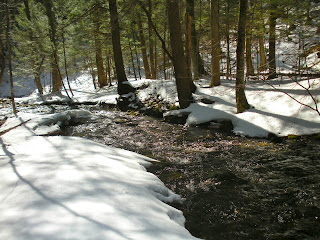 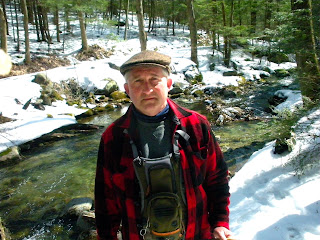