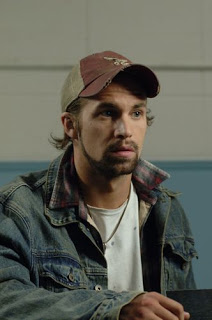 Jack Brooks, Monster Slayer (2007) is a nice, tidy, and moderately amusing revenge flick with some serious monsters and a whole lot of sinister barfing and death tentacles.

Young Jack witnessed his entire family getting whomped on by some sort of forest demon, and he is wracked with guilt because he got away. This in turn causes him to be a goateed, baseball-capped loser with a bad anger problem.

Normally this set-up would send the red flags flying, but luckily they keep the psychobabble to a dull roar, the better to concentrate on the glop, which this flick has in spades.

Robert Englund plays the nutty professor who buys the house with the evil stuff in the yard, so when he gets infected with the monster yick he retches a lot in front of his dopey students, and then morphs into a thing that looks like a cross between Jabba the Hut and Freddy Krueger.

The thing sends out the Death Tentacles, which bind up the victims until it's time to jam a weird white thing down their throats and suck up their insides (and, presumably, their souls). Then they turn into zombie monsters. 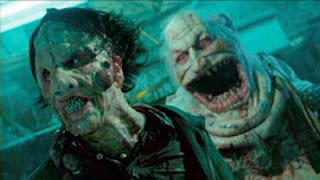 Jack's belligerence sure does come in handy here, because these zombies (or monsters, I can't decide) take a lot of killing.

There's some of kind of love subplot but I can't remember what it was about, except that it does not involve any nekkidity (automatic one coil deduction).

Short and to the point. A nice job, only lacking in breasts to be a CACA Iron Coil contender. As it is, a well-deserved three coils. 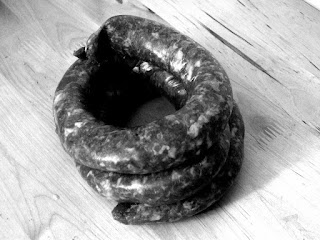