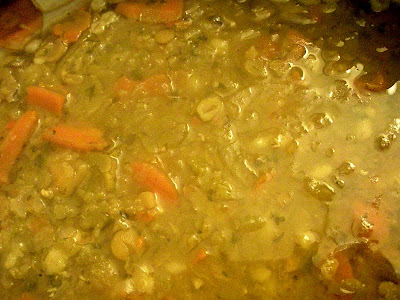 Closeup of my world-famous lentil and split pea concoction, known as "Super Puke."
6 a.m. — Wake up to "Imus" rerun, very unsatisfactory. TV news has substitute infobabes speculating breathlessly on whether or not that crazy little hedgehog-looking mofo in North Korea's gonna start a war. I hope he does; I'll volunteer to go there and do something, not that the Army is that desperate. I am that bored, though.

7 a.m. — Gym open for four hours today, so I get in early before the metal-benders and the bitter-divorcees-in-tights. The Hippity-Hop Lite satellite radio channel is on and Sweet Tap-Dancin' Jesus does it suck.

10 a.m. — Make it to local high school for annual grudge match against arch-rivals. Our guys are out of the post-season but a win would deny other team a playoff bid. Looks good — down 13-12 at half. But midway through the third quarter our guys collapse. Freezing out. Shoot breeze with acquaintances while silently wondering why I only have acquaintances and no friends. 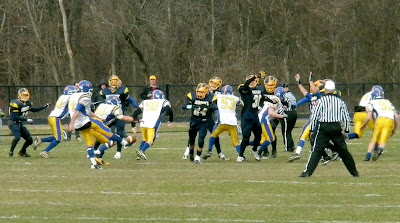 Our guys (in blue) fail to block punt from their guy. 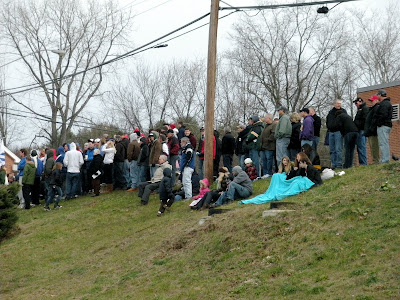 The crowd got rather quiet in the third quarter. And it got colder.

1 p.m. — Eat bowl of Super Puke (I'm going to apply for a trademark) and watch Detroit stay close for a while. Fall asleep, miss all but final three minutes. 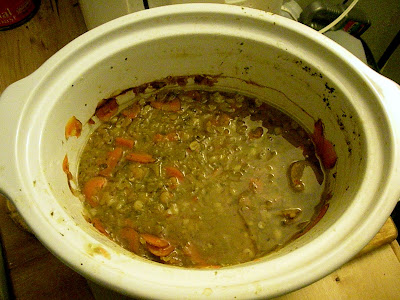 Super Puke gets better the further down you get.

3:45 p.m. — Smoke one of these new cigars that came yesterday. An evil-looking, black, oily thing, emits more of a vapor than smoke. 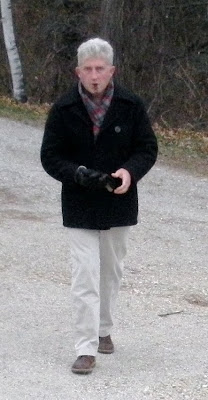 Taking a health break
4 p.m. — Assemble Official Dog-Ass Thanksgiving menu. Turkey "club" sandwich, meaning sliced turkey on toasted wheat with three pieces of bacon, cranberry sauce mixed with mayonnaise and some lettuce that was lurking in the bottom of the produce drawer. Half a sweet potato. Or is it a yam? Fuck if I know. And some sort of "Garden of Allah Spring Festive Delight Mix" veggie stuff out of a bag. 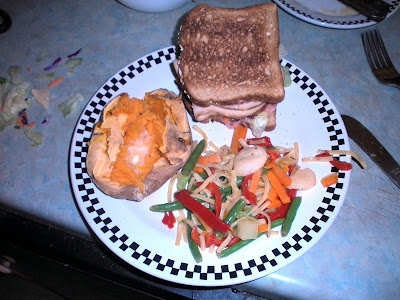 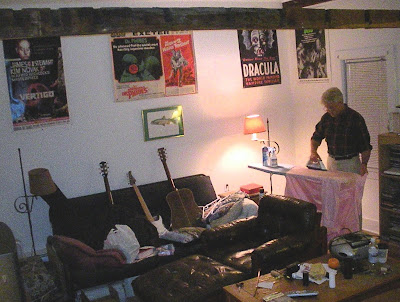 I'm still young enough to take some pride in the fact that a less than crazily busy social life indicates I have sufficient individuality that few people appreciate me, and it is a matter of time till I meet the right ones.

But coincidentally, my birthday fell on your thanksgiving this year (not that we celebrate it in the antipodes) and I got the sum total of zero birthday wishes, zero presents, zero phone calls. So I guess my thanksgiving sucked too?

Sounds like it. Oh well, fuck 'em if they can't take a joke.