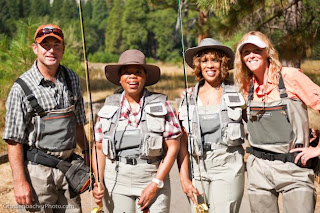 I lifted this photo from Matt Labash's column on The Daily Caller. (I think it originated at Field & Stream.) Labash quotes someone as saying Oprah fly-fishing will be worse for the sport than the Robert Redford film of "A River Runs Through It."

I remember when the film came out wondering why they went to all the trouble of assembling vintage equipment, only to string the rods up with modern, Day-Glo orange fly lines. This is also when I started to dislike Brad Pitt.

A lot of dopes saw the 1992 movie and promptly marched into the nearest Orvis shop with targets painted on their foreheads. I remember it well — the Catskills were full of them, foolishly whipping the water and standing 20 feet from each other.

Too bad eBay didn't exist then. As it was, tag and garage sales had a fly-fishing boom that lasted a decade.

So if hordes of bored housewives suddenly decide to take up angling that can only mean good deals on gear down the road.

Relax, Matt. It will pass.
Plus anything that gets more women into fishing can't be all bad. Can it? A pretty girl holding a fishing rod is a pleasant sight. Usually.

Now then. I just finished a serial killer thriller called "I Can See You" by Karen Rose, who is apparently quite successful.

This sucker is 637 pages in trade paperback. It is the single most tedious book I have ever finished, as opposed to those I haven't.

Why did I not fling the thing from me, especially when I correctly guessed the killer's identity about mid-way through?

Because I was curious to see just how bad a writer has to be to top the dog-ass New York Times bestseller list.

"Abbott's eyes sparkled with interest. 'Times that Axel Girard will need alibis for. Why didn't you tell Jack?'"

There are a lot of sparkling eyes. Also a lot of confusion about messages that do or do not go through, via cell phones, text messaging, and emails. And computers with wireless cards that work everywhere. And meaningful looks.

If Karen Rose could have gotten away with computer screen shots in the book, she would have.

This thing reads like a soap opera script. Not because of the melodrama, though it abounds.

It's like a soap because she keeps taking detours that serve no purpose other than to pad the book out. She must get paid by the inch, as in "How thick is the book?"

It's depressing, because it takes a peculiar talent to write like this, and I don't have it.
Posted by Patrick at 7:14 AM

I think one combination of woman plus fishing rod that is bound to create nightmares is Sarah Palin in her latest eight part reality show campaign ad. Truly truly horrible.