I am thinking about the ties. I have stripes galore. I've got solids, plaids, neats, repeats; reety- all-righties, swirls, twirls, floops and zoops; marching sperm, dancing girls, leaping trout, doghouses and golf clubs, and the insignias for The Episcopal Church, the Gibraltar Club and something mysterious from the local Masonic lodge that found its way to the thrift shop — and probably shouldn't have.
But what I don't have are a lot of ties with large patterns and the reason why is I think large patterns probably demand a wide tie. And I like my ties no wider than three and a half inches. 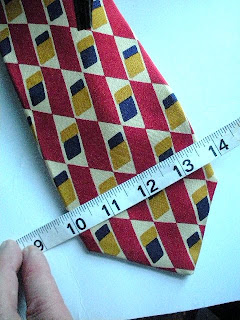 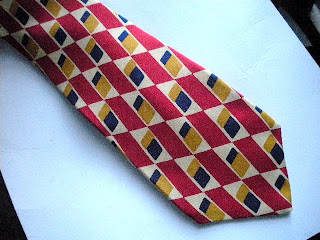 I like the pattern a lot. Would it look abbreviated on a slimmer tie? I think so. 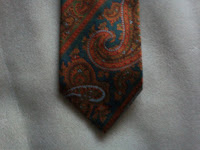 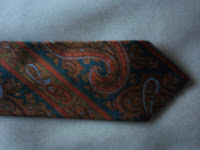 A guy in Pennsylvania who just bought a couple of things from me saw my plea on the sales blog and is sending me this J. Press paisley, which he says is massively wide.

We'll see how this goes. 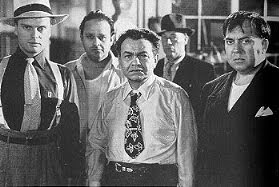 I am thinking specifically about wearing wide ties with double-breasted suits. The peak lapels on the jackets should offset the extra tie width. I'm thinking a little in the Edward G. Robinson mode here.
Posted by Patrick at 7:37 PM