The Cinema - The Incomprehensible Blood of Fu Manchu; The Dog-Ass New York Times Screws It Up, As Usual 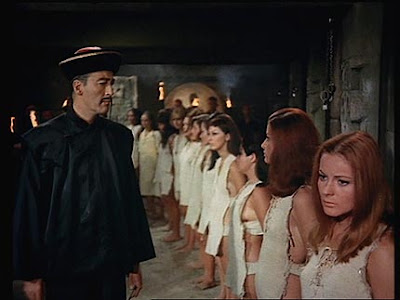 (A typical night at home with the Fu Manchus and their guests.)
The dog-ass New York Times newspaper brings to mind an old journalistic saw: "So-and-So couldn't find his fanny with both hands and a flashlight."

The DANYT has a bunch of movie reviews on file, so that the legions of black-clad, skinny eyeglass-wearing freakazoids that scurry about the city can appear to know what they're talking about at parties.

So when Google turned up a DANYT review of Jess Franco's cheese-whiz deluxe production of "Blood of Fu Manchu," I had to look.

According to the DANYT, "Fu has discovered a rare poison which affects only men, and uses it as lipstick for ten beautiful women, who are to deliver a kiss of death to each of 10 public officials."

Wrong, dog-asses. The poison's in the snakes, and the snakes bite the women, who act as carriers, which if you'd been paying any attention at all to the film instead of trying to eat your hummus wrap and re-read your dog-eared copy of Truffaut on Hitchcock while hitting the fast-forward and yakking with your nasty fat girlfriend with the funky teeth and magenta hair...

The dog-ass reviewer continues: "[Star Christopher] Lee's wooden performance is alleviated by an amusing turn by Ricardo Palacios as a revolutionary, and a beautiful female cast."

Does this mean Palacios played both a revolutionary and a bunch of beautiful women?

(Pssst - Palacios plays a bandit, not a revolutionary, but the DANYT wouldn't get that, being unrepentant Commies.) 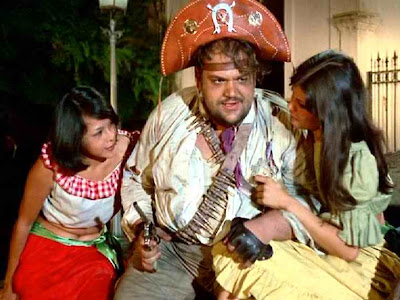 And finally, the DANYT calls the film "entertaining, if extremely sexist," a sniveling liberal weeny cop-out if I ever read one.

In fact, Blood of Fu Manchu (1968) is yet another one of Jess Franco's films that makes you wonder how on earth this man ever convinced anybody to give him one red pfennig to do anything except go away.

His films are masterpieces of schlock and stock footage, clumsily glued together; day-for-night shooting, whether the so-called plot demands it or not; gratuitous everything, be it breasts, cocktail jazz, or beat poetry; and a heavy hand on the zoom.

Christopher Lee, no doubt happy to have a role that didn't involve false teeth, hams it up as best he can with his eyelids glued shut, wearing a satin nightgown, and with little in the way of lines except "Kill them," or "My enemies will receive the kiss of death."

There's some decent dungeon stuff, and enough with the snakes to keep the herpephiles happy, but mostly this is a typically disjointed Jess Franco piece of doo-doo, and one of the reasons Netflix is successful - if you use the service enough, renting Blood of Fu Manchu costs almost nothing.

Which is what it's worth. Six breasts, one fat bandit chief, three kisses of death. Snakes. Bad dancing. Bad mariachi music. Fat dictator. No plot but lots of characters. One coil.