From Kooky Calvinists to Fenway Fatheads 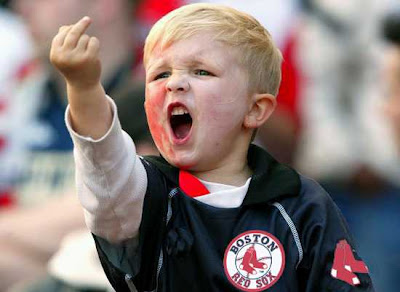 With the Boston Red Sox heading to the World Series again, I feel it is important to point out something to their fans:

Just because your team is good after all these years doesn't mean you should act like Yankee fans. Which you are.

In my day job, which actually takes place at night, I mingle with people watching the playoff games, and to a man the Boston fans are the most obnoxious of the bunch.

"Effing Sawx effing rule!" is about the most intelligent thing out of their mouths thus far, although I expect that sentiment to be exceeded during the World Series.

My favorite, though, was a comment on a TV crowd shot in Cleveland. "Theah ah some effing ugly people in that town," said one big thinker, who clearly hadn't taken a clear-eyed, analytical glance around the room.

And the New Breed, like their Yankee counterparts, abandon ship at the first sign of trouble. When the Indians were smacking around the preposterously-nicknamed "Dice-K" in the third game the assembled geniuses had some choice remarks for the Japanese import, material that might have been lifted from a WWII propaganda film.

(And what's with "Dice-K" anyway? Are you people completely illiterate? Even the broadcasters, who as a group possess the IQ of approximately one small doughnut, can handle "Matsuzaka.")

I much preferred the Red Sox fans when they believed in the Curse and trudged through life expecting the worst. They were grateful for whatever crumbs of good fortune came their way, and when their hopes were dashed, rebounded with New England stubbornness.

But now they're just Yankee fans with a different accent.