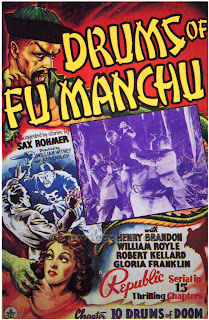 The 1940 Republic Pictures serial The Drums of Fu Manchu is just flat-out terrific. The episodes last about 15 minutes and always end with something evil or sinister about to happen.

Henry Brandon's Fu Manchu has a curiously high-pitched voice and sounds so similar to various characters created by Monty Python's Eric Idle that I keep waiting for Fu Manchu to command a Dacoit to fetch the comfy chair.

He also says genuinely Eville things like "He is clever, this young American. But not quite clever enough."

The male second fiddle gets the crap knocked out of him in highly entertaining ways. In the first six episodes, Fu Manchu drops this fellow in a tank with a killer octopus; abandons him in a plane with no fuel; straps him to a table with a sharp pendulum blade swinging ever closer, a la Edgar Allan Poe; and finally steals his face at the airport.

The guy also gets attacked regularly by Dacoits, Fu's henchmen, of whom there is an apparently endless supply.

And this Fu Manchu has some primitive martial arts fighting scenes that beat the usual chop-socky because, well, they're short.

I forget where I left off. The good guys, headed by Sir Nayland Smith, is trying to stop Fu Manchu from finding the sacred dagger in the lost tomb of Genghis Khan so he can start a war in Central Asia; Fu got away with the Karnak Segment or the Oshkosh Papyrus or something. The second disk with chapters seven through 15 is on the way. I can hardly wait.

No coils, just a hearty endorsement. 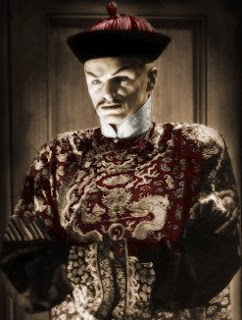