Hot on the trail of the remaining Christopher Lee Fu Manchu movies, I hit a dead end. The films have disappeared like a mysterious arch-criminal into the wilds of the Central Asian steppes.

So I had to investigate other avenues to satisfy my curious new obsession:

The Mask of Fu Manchu (1932) stars Boris Karloff as the good doctor and Myrna Loy as his daughter. Karloff hams it up, especially when he's got the guy strapped under the huge bell, but he can't rescue this turkey from deserved oblivion. Mask is interesting as a historical curio; phrases like "You yellow devil!" would raise a plucked eyebrow today.

It's short, but not short enough. One coil. 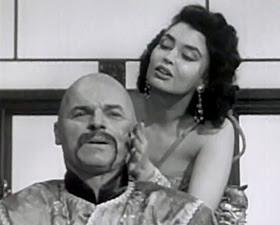 Do these people look Chinese to you?

The Adventures of Dr. Fu Manchu is a set of four television shows from 1956, starring Glen Gordon as an entirely too Occidental version of the evil genius, and the decidedly Latina Loretta Luez as the bizarrely-named daughter Karamaneh.

Gordon ah-adds-ah rotsa ah-so raffs in a performance that would be embarrassing if anybody gave a damn, and the plots have a real Cold War paranoia to them - in one episode, Fu Manchu teams up with Adolf Hitler, who now sells insurance from a bunker in the South Pacific.

The "So Solly" stuff and the inclusion of the Red Chinese menace (as opposed to the Yellow Peril) earn this collection an extra half a coil.

Chino pants, aka "khakis," are of course the default trouser for Regular American Men, and the best around are made by Bill's Khakis.

The M1 model has a long rise and puts those stupid "relaxed fit" Dockers and crap to shame. In the flat front version, this is the pant your forefathers wore in the Big One, WW II.

The M2 is better suited for those who spend some time in the gym.

Both come in pleated versions; the M1 pleated is superior, with one forward pleat. The M2 has the more familiar double reverse, which because American men insist on wearing the pants at their hips like skinny teenagers, balloon out and look thoroughly absurd.

Bill's are not cheap; the standard chino twill is just a shade under $100 a pop. But the good news is for this price you can get them all hemmed or cuffed and ready to go from Hansen's Clothing.

Tip: Get your chinos cuffed, and get the cuff big - one and three-quarters inch.

I also got a pair of Bill's cords from them recently, and a nicer pair of winter pants I can't imagine.