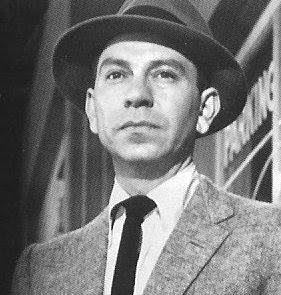 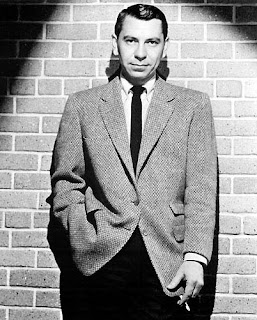 I recently picked up a four-disc DVD set from the bargain bin at the Super Duper Stop & Shop in Canaan, Conn. - the same unlikely setting has provided me with the original King Kong (remastered) and Barbarella, Queen of the Galaxy.

This set, Best of TV Detectives, has a couple of Alfred Hitchcock Presents and some other moderately interesting stuff - a couple of Glen Howard Fu Manchus, half a dozen Dick Tracys.

And 13 episodes of Dragnet from 1953-54. Dragnet was really the original cop show, and it's astonishing how contemporary they are. The crimes include murder, grand theft in the form of swindling families of recently deceased servicemen, and child molestation. Sounds like a typical night of Law & Order reruns to me.

But the biggest revelation to me was Jack Webb's Joe Friday, Sartorial Stud.

Sgt. Friday invariably wears a shirt with a buttondown collar that has a serious roll to it. And with his slim cut sports jackets (often featuring a ticket pocket) and snap-brim fedora, he looks like (gasp) a jazz musician or something.

In one episode, he bends over to scoop up a dog that's in the way, revealing what appear to be black loafers and argyle socks. Argyle socks!? From the "Just the facts, ma'am" guy?

And Friday is always showing just a bit of shirt cuff, in elegant and sharp contradistinction to his fat partner, whose jacket buttons always appear to be on the verge of flying off, with the swallows, to Capistrano. 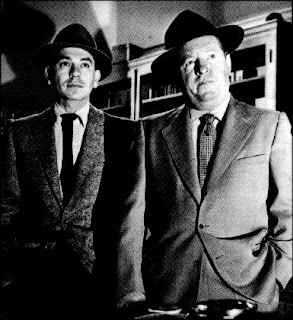 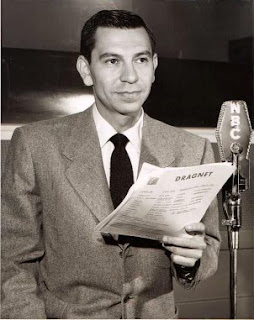 Postscript: Here is a Time magazine cover story about Webb. The author's son, who provided the link, informs me that Mr. Webb wasn't too pleased with some aspects of the piece.

I remember watching that show when I was a kid. I'm pretty sure they were reruns. After school viewing for the most part. Maybe prime time. I can't remember. Anyway, I never would have guessed he was such a dude. That jacket in the second photo is the nuts.

Now I'm starting to wonder what Barnibus was wearing in Dark Shadows.

1) How are you in contact with Jack Webb's son??

2) Ever watch the old Nightstalker? My kid was recently obsessed with the "new" Nightstalker and we watched a few episodes of the original. He has a great superprep look, very Richard-Dreyfus-in-American-Graffiti, lots of khaki pants and crisp button downs and his trademark straw hat.

common reruns w/webb in Dragnet in early 70s.
He was paired w/Harry Morgan.