I'm a Democrat because:

1. It's always been that way

2. My late grandmother Margaret Collin would haunt me if I changed parties. As it is I feel an icy chill if I vote for a Libertarian or a Green.

3. It's always been that way

4. It's always been that way

Over the years I have become steadily disenchanted with my party. My party seems to appeal primarily to people who write formulaic, indignant letters to the papers:

Also featuring prominently in my party are folks who regard 1968 as the high-water mark of American life, with protests, riots, assassinations and all kinds of groovy stuff.

These nitwits are organized - of course - into a group, Recreate68, which plans to do something at the Democratic convention in Denver.

Do their re-enactment plans call for authentic thumping of hippies by cops? I certainly hope so.

The party leadership isn't doing a very good job. In fact, I think it safe to call them utterly delusional.

Why? Last time around, they had as a target an unpopular blue-blood President, a Yalie Skull & Bones knucklehead with lousy rhetorical skills and a record of stunning mediocrity.

Who'd they choose? Their own blue-blooded Yalie Skull & Bones knucklehead with even worse rhetorical skills, a record of stunning mediocrity and a rich wife with a big mouth.

And now, as the result of forty years of identity politics, Democrats find themselves in a rather hilarious situation: Half of the delegates are afraid to go against Sen. Barack Obama lest they be called racists; the other half are worried that, if they go against Sen. Hillary Clinton, they will be vilified as sexists.

Meanwhile a few pockets of intelligent life remain in the party so dominated by symbolic victories, shameless pandering and the usual patronage and pork. Bill Bradley's The New American Story is a sober look at America's current state that actually offers solutions - ideas that might not be to everybody's liking but certainly provide a place to start.

So after either Obama or Clinton gets whomped in the fall, will the Dems finally learn their lesson and start concentrating on results? Will the party get some guts and tell MoveOn.org to live up to its name?

What's it going to be: Hoopster or Hippie? 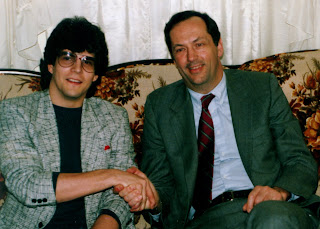 Bill Bradley, demonstrating his broad appeal, nails down the Guido vote, after helping remove the plastic cover from the sofa for the picture.
Posted by Patrick at 9:43 AM

Delusional? Ouch! My hunch is that your father wouldn't recognize today's Democratic Party simply because it's gone too far to the right. And picking on hippies hurts my feelings. I love hippies. Hippies are good for everyone!! No, really.

You are a hippie, aren't you.

Let's see. The hippies or the creationists. Tough choice? No, not really.

You got it wrong: I'm the FOURTH yurt from the left.
C.
Organic Wallow

I was a Texas Democrat, and will vote for a Democratic Sheriff, DA, County Commissioner, Judge etc...However, the national party has lost my vote. I have not a clue who I'll vote for in Nov. both Obama and McCain or worthless.
If you want to talk about worthless...Look at the Texas Republican Governor, Rick "good-hair" Perry. He is about to raid the Teacher's Retirement System so his "buddies" can make a buck off of it....