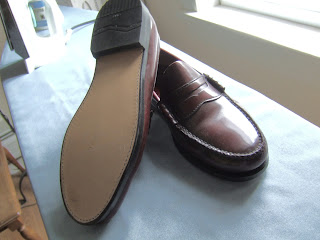 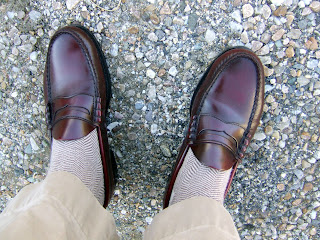 The Weejun, resoled and in action
Some years ago now, while looking for information on suits, I stumbled on the Ask Andy About Clothes forum and an obsession was born.

There are sub-obsessions, and for the last two years mine has been finding the right penny loafer. I was loafer-resistant: the concept seemed pretty sissified to me, and I still won't even consider a tassel. Very gradually I warmed to the idea of a loafer at all via the boat shoe. From the battered Topsider it's a fairly short stretch to the Weejun, the famous penny loafer made by Bass.

I tried a pair from the outlet store in Lee, Mass. My first mistake was buying them too big. I was under the impression loafers should be the same size as one's other shoes. Maybe for other guys, but not me. I need one that is shorter, otherwise it just flops around.

The second mistake was buying the Weejuns from the outlet at all. The typical Bass loafer available at outlets is made of a shiny (and, I learned, cheap) leather called corrected grain. It looks like plastic and feels like it, too. I eventually thrifted a pair of older USA-made Weejuns with the soles falling off, and had them resoled by an outfit called NuShoe. (Oddly, the uppers and interior were fine.)

Back to the forum. I read up on loafers, and the odyssey began.

I discovered that Lands End shoes run big, like their sport jackets. I discovered that the penny loafer as practiced by whoever makes the calfskin ones for Brooks is too pointy. I found that Sebago's corrected grain isn't nearly as obnoxious as that used by Bass, and that by combining black loafers with baggy chinos and a plaid short-sleeve sport shirt with a button-down collar one can recreate the look sported by the young Richard Dreyfuss in American Graffiti. (Not that it comes up often, or ever, but nice to know the option's there.)

And I found it gets tricky when one has a skinny ankle and a wide-ish everything else. I can get the heel right and have too much up front, or it can fit like a glove in the toe box and I'm falling out of them in the back.

But I persevered, and experimented, and spent too much money, and now I have a bunch of penny loafers that are satisfactory or better, to varying degrees. 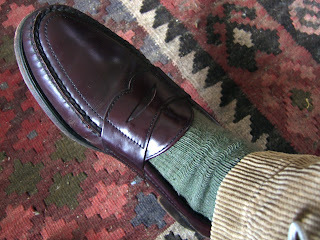 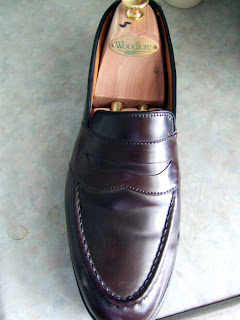 Story behind these - got them on eBay, and noticed the leather just seemed more substantial than anything else I owned. Then I took a spill and managed to scratch the hell out of them. Ruined, I thought. Shoe cream, polish, leather conditioners - nothing helped.

Then I read up on shell cordovan and learned that the oils in this type of leather stay put forever. Should some calamity occur, the best bet is to give the shoes a brisk brushing and leave them alone to allow Nature to take its course.

Which I did, and now the scratches are barely noticeable. (Which is why I think these are shell.) 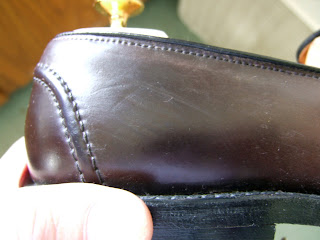 I like the Great Loafer Hunt. I have been on a similar safari lately.

I think your choices are pretty good. Since you're discussing strictly penny loafers here (and not tassels or bits), here are my current favorites*:
Good for work, easy to dress up-

Alden-Brooks Shell in black and maroon. (Gifts from a fantastic girl.)

Nice with jeans or summery fabrics like seersucker or oxford cloth-
Foot Joy that is very similar to the AE Randolph, in tan/chili-style color. Cheap from the golflocker.com

Good for rainy days, not afraid to scuff up-AE Kenwood in Brown.

I like that you have some lug soles. That's next on my wish list, along with maybe some suede.

*These are my favorites because they are the only ones I own.

Those look like shell to me, at least the photo of the heel does.

For God sakes what does it take to find a decent loafer now days? I have had my fair share of blister popping, toe smashing, ankle biting, cheap leather imitation loafers.

However, I have found that the Sebago Classic loafer you mentioned has been worth the attention giving. I now swear by the Sebago brand and it is the only casual/dress shoe’s I buy.

I did some research on Sebago and all of their dress shoes are still genuine handsewn and not made in China, which is not the story with most of its competitors.

Anyway, I hope my opinion helps and good luck with your own hunt for the right loafer!

For God sakes what does it take to find a decent loafer now days? I have had my fair share of blister popping, toe smashing, ankle biting, cheap leather imitation loafers.

However, I have found that the Sebago Classic loafer you mentioned has been worth the attention giving. I now swear by the Sebago brand and it is the only casual/dress shoe I buy.

I did some research on Sebago and all of their dress shoes are still genuine handsewn and not made in China, which is not the story with most of its competitors. Anyway, I hope my opinion helps and good luck with your own hunt for the right loafer!

PS-I used to have two pairs of the Sebago Cayman II. I don't have them anymore but I like them as some of the best all purpose loafers.

I would like to get some more at some point, but only after the aforementioned current inventory in my closet has been exhausted.

PPS-I tried the SAS loafer once about three years ago. I thought it would be a good casual one, for jeans or light beachy pants and the like. I liked the styling but the leather was a bit plasticky and made a squeak when I walked. I had to donate them, in hopes that someone else's gait or anatomy would be more suitable for these shoes.

(from 3 button Max)
Always enjoy your posts and blogs Patrick.

Patrick -always enjoy your postings and blogs-
The great loafer hunt is funny-my favorite penny loafers are all somewhat vintage-or at least from the days before Bass offshored everything.
1 sebago, and 3 Bass. thrifted andgave away a green suede and (navy)blue(regular leather) weejuns.-I discovered that they really offered these and they werent a strange creative dye job-
I even have a vintage pair of black tassel weejuns which I have had resoled twice. Thrifting these before year of 2000, was easy but less common now.

Nice post Pat.
Loafers are far harder than lace-ups to get right. They either fit or they don't - And you can't tighten them up, although wearing two pairs of socks is always an option...

I've come to chat to prove that there are no "Trad" wars & that I like what you do... And I like your Dad even more...

At the moment my eye is on Alden, Longy, you, & a coupla others.

Stick with "Trad" by all means, but like Longy I suspect you are now moving beyond it.

- And your ongoing input into "Trad" can therefore only serve to improve it.

But it's maybe worth it for the style we both love?

I'm easy to chat to on SF & FNB, but on AAAT you'll have to ask around, but I am always up for a chat. Why wouldn't I be?

Pick a name and stick with it, f'r Chrissakes.

I will fool around with an insert, though.

I'm waiting for another blast from Golf Locker to check out a "blemished" Footjoy loafer. The laceups from them, at about $90 shipped, have to be one of the great shoe deals of all time.

Good idea. I'll stick with "Russell Street" now I think.
In the UK we have a strict divide between Penny & Beefroll loafers which you don't see in the States that much. Often in the US a Beefroll is called a Penny & nobody blinks an eye. I offer the info only for your entertainment.

I am also on the hunt for the perfect loafer. I was at Brooks tonight on Madison Avenue (after Paul Stewart and another shoe store I can't remember the name of) and I ran into a man wearing the exact loafers I have been looking for so I asked him where he bought them. Unfortunately, he was visiting NYC from Spain and he said that he was going to throw them away when he returned home because they were so old. They were made by Sebago.

Recently I have tried Bass and they are made of plastic. But I have been wondering how much I would have to pay for the perfect loafer and I am not even sure they exist.

thanks for letting me know I am not alone in this search.