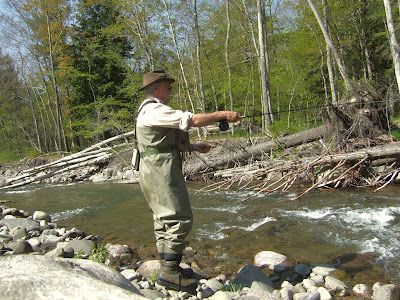 High-sticking an attractor-dropper combo. Should have been crouching but my back was sore.

This past weekend I made my first foray of the year to my home waters - the Esopus Creek in Ulster County, N.Y. (and its tributaries).

Conditions were excellent. So good, in fact, that I wonder if we're in for a lot of high and dry-ness later on.

The Esopus is big water. And unlike a lot of Catskill rivers, it is not easy to fish the dry fly here. Too fast, too deep, not enough defined riffle-pool-riffle setups.

Lots of pocket water, though, and a great place for the high-sticking wet fly or nymph man.

The spot where I began, however, has a stretch along the southern bank that is relatively flat and placid - and is shaded by mid-morning. A perfect place, in fact, to prospect with a dry fly, either roll-casting from the bank or fishing straight ahead from the stream.

I am a fan of the larger fly. Dinky flies don't interest me, probably because I can't see them.

So I tied on my favorite "Hey, Get a Load of Me!" pattern - a Royal caddis, size 14 - and started flicking it here and there.

Sure enough, a nice rainbow rose up and grabbed it on the fourth or fifth cast. Nothing spectacular, a 12 or 13-inch wild rainbow.

But the Esopus has something like 60,000 of them at any given time in an 11-mile stretch from the Portal in Allaben to the Ashokan reservoir.

That's a lot of fish.

That ended the actual fish-catching portion of the day, however. 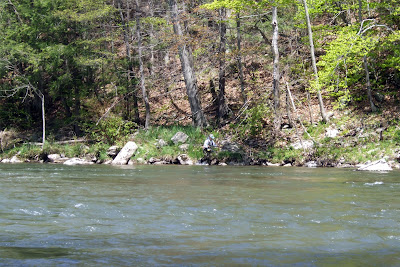 Be sure to stand out where the fish can see you, and splash around a lot


I did watch a fellow on the opposite bank put on a clinic on How Not To Fish. Here's the gist of it:

I also spent a little time on some semi-private water. I belong to a loose confederation of fly rodders who pony up each year to stock a section of an Esopus tributary with brown trout. Cooperative landowners allow access for fly fishing only.

I am always curious to see if there are any holdovers. Last year I caught an extremely long, skinny and hungry specimen on a miserable day in April. He gave me a really nasty look, too. "You mamma-tamma - my first square meal in months, and it's a fake!"

No browns this time, but I did get a couple of the ubiquitous wild rainbows - little guys on their first time around the track.

As is my usual practice, I released everybody, hoping the combination of sore jaws and long memories makes for good outings in the future.

Fishing style - The Well-Dressed Angler is wearing cotton/wool blend Viyella shirts this early season. Here is a Lands End model bought secondhand, which blends nicely with the puke-green waders from Cabelas. Polarized clip-ons from Cocoons allow the WDA to use his bifocals, without which he can no longer tie on a fly. 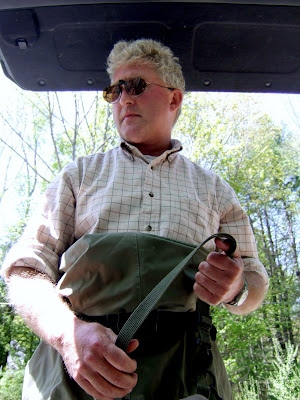