I Have Seen Flavor Flav, and We Are Doomed 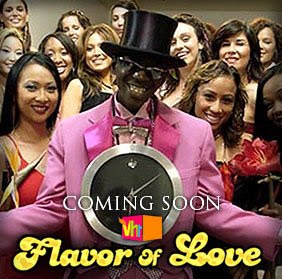 Last night I watched something called "Flavor of Love" on the VH1 channel, in the company of some of the younger residents at the facility where I earn the weekly check.

Mr. Flav, a rapper of modest accomplishment, wears outlandish clothes, crowns, viking helmets, and large clocks around his neck. In the "reality" program, he is interviewing, sort of, three silly young women all vying for the unenviable position of being Mr. Flav's paramour.

Mr. Flav, whose memory appears faulty, possibly for the same reason his eyes appear bloodshot, has problems remembering the girls' names, so he makes up monikers for them that are easy to recall. One of them is known as "Thing 2," which assumes there was an original Thing.

Regular readers of this blog know that I take a peculiar delight in watching bad movies. Kitschy pop culture is a lot of fun.

"Flavor of Love" is just wretched stuff. There is nothing funny, witty, or clever about it.

Jazz writer Stanley Crouch has something to say about the Flavor Flavs of this world, in an interview with All About Jazz:

AAJ: When you condemn gangsta rap, aren't you fighting city hall? This isn't a subculture any longer. It is the predominate cultural influence.

SC: It is contemporary minstrelsy. You have to remember that minstrelsy was once very big. Minstrelsy was extremely popular when it came out. People didn't imitate the minstrels off stage like they do now, but that was definitely a big industry and created all these products that had all these grinning “coon” figures.

All of that was part of the minstrelsy that dominated American life in terms of its popular culture. That's what we're in the middle of now and it has to be recognized for what it is.

In 1990 I did my student teaching in a high school in Kingston, N.Y. One of my kids wore a large clock around his neck. Oddly enough, he was always late.

This young man had little interest in English, very poor social skills, and a burgeoning drug problem. I didn't understand him at first but now, years later, I suspect he was imitating his hero. 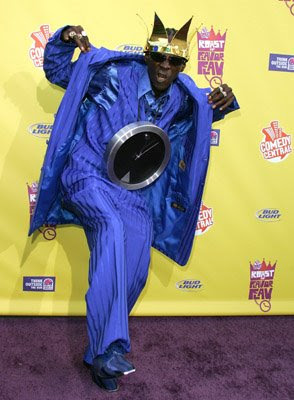 The reason gangsta rap predominates is because the people who created it are held as paragons of creativity, cool, and revolution. They (and their imitators and enablers) are THE establishment now.

Bad pop culture shows can be fun but Flavor of Love and the more recent VH1 offerings have been miserable as of late.

You may enjoy watching the weekly "update" shows such as Best Week Ever on VH1 or The Soup on E! though. The girlfriend and I quite enjoying catching up on the pop culture we "missed" in the week in a consolidated format.

Gack. I'd rather go fishing.

Flavor Flav is just a symptom of a chronic, progressive and culturally fatal disease.

Thing 2 was originally paired with her twin - Thing 1. These nicknames derived from Dr. Seuss' "Cat in a The Hat". I would've chose "Black".

David Letterman mastered "high stupidity," as has the British auto show "Top Gear." And occasionally, pop culture inadvertently backs into "high stupidity." Flav almost does this with his outrageous costumes, but ultimately he fails.