The Cinema - Shiny Boots of Cheez Whiz: "Venus In Furs" is True Torture 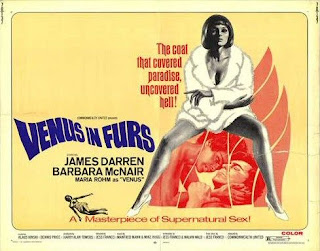 Jess Franco's Venus in Furs (1969) is quite possibly the Worst Film Ever Made.

Regular readers of this blog know that my standards are quite high for bad cinema. I have seen hundreds of rotten flicks, and this piece of Pure-D doo-doo shoots straight to the top of the short list.

Based on an incomprehensible novelette by famous Kraut weirdo Leopold von Sacher Masoch (also the inspiration for a great song by The Velvet Underground), this film is told almost entirely in voice-over, flashback narration. This might be artistic, evoking memories of classic noir cinema like Double Indemnity, or it could be because that the actors don't have to learn any dialogue and the editor doesn't have to synch it up.

(I'm inclined to go with the latter.)

The narrator, a bad trumpet player named Jimmy, finds the nude corpse of the lovely and mysterious Wanda on the beach in Istanbul, where he has buried his horn in the sand.

This scene was apparently shot in the dark with old, partially exposed film, and has the punch of a 40 year old filmstrip on the presidency of William McKinley.

Then it's off to Rio, where Jimmy gets his act together a bit and hangs with Rita, a singer who performs on her back. Really.

But Wanda keeps popping up. Is she dead? Is she a figment of Jimmy's tortured imagination? Is that Manfred Mann playing piano? 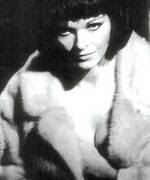 (These people are evil, but we're not sure why. They could also be dead.)

Here's a sample of the deathless narration:

She was beautiful, even though she was dead. It's like there was a connection between us.

Time is like the ocean - you can't hang on to it.

Franco chews up immense amounts of screen time with scenes of the jazz group playing a godawful brand of cocktail lounge music and stock footage of happy people in ethnic costumes dancing in the streets of Rio. Or is it Istanbul?

Half a coil for this turkey.