I need a big week or five. Bad. Last year was my first in 16 years of doing this with a losing record. It's coming down to pride and the ability to look convincing in an Italian suit. 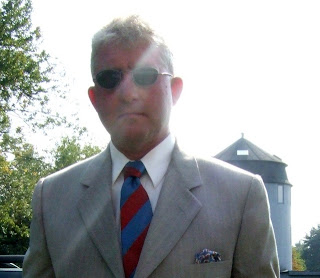 What the bush you lookin' at?

So let us hope that this is a gargantuan breakout Sunday of epic colossal mega-ness.

Det +3 vs. NYG: I'm sorry, but I don't know what the oddsmakers are thinking about here. The NY pass rush might give Detroit QB Jon Kitna some problems, but come on - there's nothing that makes the 6-3 Giants better than the 6-3 Lions, especially in Detroit. And after watching the bad basics from last week - the play clock comes to mind - I'm even less bullish on the Giants.

NE - 16.5 at Buf: I get burned every time by these collegiate spreads. The Bills are a decent team. They are not going to beat the Patriots. They are not going to be close to the Patriots, who might trail 7-3 at the end of the first quarter. But by the end of events Sunday night the Pats will move one step closer to the undefeated mark and post another double-digit win (with the first digit being a two).

Pit - 10 at NYJ: Kellen Clemens looks fairly good, which is very nice for the future but won't help against relentless Steeler defense.

You might be wondering "Gee. I wonder who makes that fine, sophisticated-looking Eyetalian suit Sully's wearing in that crappy photo?"

And the answer is: Corneliani, an Italian house that makes some pretty good RTW suits and jackets if you like that sort of thing - three-button front, high gorge (none of your three-roll-two sack stuff here); aggressive shoulders and darting, narrow waist, ventless. Slightly out of character are the pleated trousers - those guys like the straight legs usually.

This one I found thrifting and it has less shoulder padding than others I've seen. It happens to be a good fit for my Brooks Brothers frame.

Corneliani makes garments for Ralph of Long Island, among others, and can be found in your higher-end, snooty-type department stores.

By the way, that's a Sam Hober tie I had made up in the colors of the World's Most Annoying Baseball Team, the New York Mets.