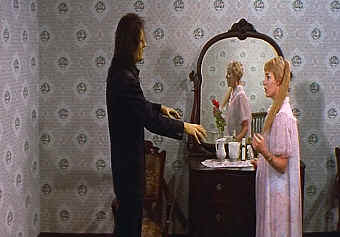 Rule Number One of bayou life: Never leave a nightclub floozie alone with your dead brother

Blood of the Zombie and the uncredited bonus feature Voodoo Swamp are early 60s films by the immortal Barry Mahon. Cheap, amateurish, and ridiculous, they nonetheless take the viewer back to a simpler time, when men wore coats and ties, women Capri pants, and traditional slow-moving zombies abounded.

In Blood of the Zombie, some idiot inherits the rights to an old plantation, so he gets married, drags the girl around to series of juke joints and strip clubs on their wedding night, and then, when she is clearly getting tired of him clicking his fingers on the wrong beat, he stops to rescure one of the nightclub floozies, whose car has broken down.

So the gang gets to Kenilworth, only to get a frosty reception from cousin Monica, who has been running the joint as her own personal voodoo camp, with the assistance of her recently deceased but still mobile brother, Jonas. 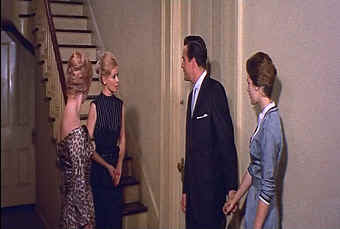 "It was very... inconsiderate of you to arrive so late. Just for that, you get an extra zombie."

Jonas looks like Alice Cooper minus the top hat and moves like Cinderella's stepmother after a five-day drunk, but that doesn't prevent him from killing the floozie.

Voodoo drumming by the Rhythmless Nation. Zombie that resembles an early-70s Glam Rock star. The absolute worst jazz ever heard in any film anywhere. Bored voodoo slaves. Mean blonde cousin Monica. No hooters (this was 1961). Absurd, and the DVD purchase only redeemed by...

The extra flick, Voodoo Swamp, in which Barry saved money by omitting any titles at all. (The "The End" at the film's finale is clearly a video addition. It would have been funnier in the middle somewhere.) Miss Ryan comes to New Orleans to find her sister Vicki, who hasn't been heard from in a month. Alas, Vicki's been kidnapped and turned into the "Before" picture for a psoriasis treatment by the evildoers who live at the Slave Camp in the middle of Voodoo Swamp.

So Miss Ryan and Jack the Private Eye set out in a teeny little canoe with only one paddle. Of course she shoots it with the machine gun by mistake and it sinks.

A hulking bad guy follows them, but he turns out to be okay later. Oh, and gets his head chopped off and thrown in a pit of snakes.

Eventually everything comes to a head 'round the voodoo fire and the good guys win. 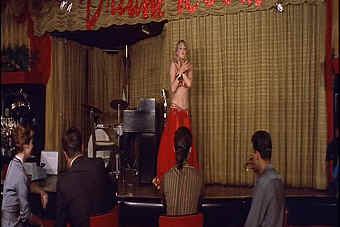 Many scenes of snakes with their mouths open. Snake eating frog, and apparently enjoying the experience. More bad stripteasing. Many sequences have no sound, a technical difficulty that in retrospect is a blessing. Girl in Capri pants. Girl in wet Capri pants. Girl putting Capri pants back on when dry. Please bring back Capri pants - this low-rider jeans thing has gone on way too long. 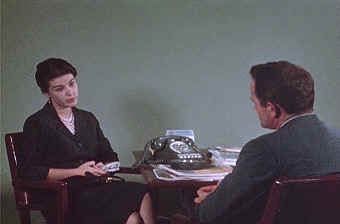 Miss Ryan looks demure here, but wait until you get a load of her in Capri pants
Taken together, these films are so horrible, yet entertaining, that I am introducing a new rating category, just to deal with the "So Bad It's Good" phenomenon.

Ladies and gents, I give you: 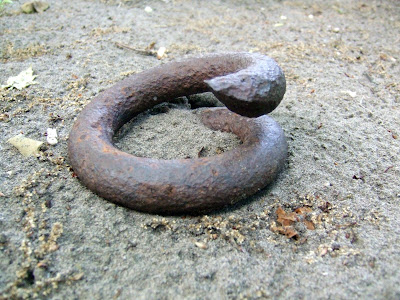