The men's clothing message boards occasionally get bogged down in what has to be the World's Stupidest Argument - one that is so dumb it can't even be defined adequately.

Do the guys who make a point of dressing as Trads (substitute Ivy, TNSIL, etc.) refer back to a mythical Golden Age, when men wore sacks, women stayed home and we were keeping the Commies at bay? Is a buttondown collar a sign of someone who is already in the country club, or of an aspirant? Does a 3-2 roll on the lapel guarantee goodness and decency on the part of the wearer?

And is anybody else as tired of this crap as I am?

So here's my last word on the subject: 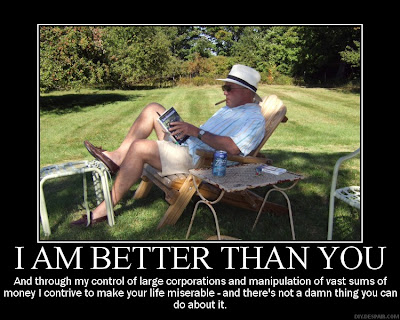 Thanks to despair.com
Posted by Patrick at 7:36 AM

When I see a man in a sack suit or jacket, other than myself of course, he is always very old and appears to have not bought any new clothes for a very long time.

In truth, I'm always wanting to be mistaken for somebody with a little class. But, hell, you've got to look like something. Doesn't seem like a big deal to me.

The last person I noticed getting all worked up about aspirational stuff was H. L. Polling who, I assume, was born into some sort of east coast hotter than shit society families. Naturally his view would be that everyone wants to be just like him. And he's standing by it.

Up here in my neighborhood next door to a school called Harvard, we also see alot of old coots in sack suits...and every once in a while a pile of old sack suits in the same size will turn up at Goodwll..hmm.

I can state first hand that the arguments are outlandish. I'm an Italian Catholic with dark hair and what is known around here as a "townie" accent, and have often rceived a boatload of criticism for my audacity in wearing OCBD, repp ties and the like.

Ivy leaguers, a dying breed to be sure, are a lot like anybody in some ways. They get defensive and upset when their s**t goes public.

But what can I say? The clothes look good, and any guy who knows whats what should take a few cues from this particular bit of history.

Sullivan? you must be a Catholic too, you degenerate potato-eater!

I have achieved a certain rapprochement with the English Patient, so I won't knock him. He's an enthusiast, and a bit of a kook.

People don't have to respond. If they find themselves wandering aimlessly on Russell Street they have only themselves to blame.

Easy folks, you all owe Uncle Russell more than you know.