Confessions of a Clothing Geek (Part One)

On any given day I don coat and tie, start the car, turn off the coffee - and pose awkwardly for self- timed photos of my choice of clothes.

Later in the day I post these photos on Ask Andy About Clothes, a website devoted to men's clothing. I joined in April of 2005; my inaugural post was titled "Gorillas" and asked why the sleeves on ready-to-wear sports shirts, the kind sized as small, medium, etc., are apparently designed for one of mankind's simian relations (too long).

I am now nearing 3500 posts, two rooms and two closets filled with clothes and shoes, and an obsession every bit as ferocious as my fly-fishing jones.

I recently received a pair of handsewn loafers from the Quoddy Trail people in Maine. I posted pics, of course.

"A. Squire," an Ask Andy member known for his bow ties and sometimes bizarre pictorials, asked an innocent question as to how many shoes I own.

The answer: an appalling 68 pairs, including fishing, hiking, snow and athletic shoes.

Ask Andy is the creation of Andy Gilchrist, an affable sort who probably had no idea this thing would ever get so big.

And there is a coterie of experts whose opinions (sometimes pronouncements) spark intense debate.

I post mostly in the Trad Forum, where devotees of what I think of as the "1960s House of Representatives Look" gather to discuss the best buttondown collar rolls, whether a 3.75 inch tie is too wide, and the evils of pleats and darts.

Discussions among this subset range from matters of dogma ( the orthodox, or Trad Taliban, vs. those who don't mind the occasional pleated trouser) to practical matters ("Where can I find a sack blazer for less than the price of a used car?") to the stunningly silly (a series of threads trying to identify the essential Trad haircut, dog bed, or tennis shoe).

In addition to the main Fashion and Trad forums, Ask Andy also has The Interchange - ostensibly for civilized general chat and more often than not a platform for political squabbles of little consequence or interest- and forums on women's clothes, grooming, sales and one devoted to Anglophilia.

Internet personalities abound. Sometimes they are readily identifable - I make no attempt to disguise myself - and sometimes the posters hide behind elaborate smokescreens.

Rivalries, cliques and feuds develop. Alliances are forged and then disintegrate.

Occasionally a "troll" stirs things up. An Internet troll is a most curious creature - someone who lives to cause trouble on something as picayune as a hobbyist's message board clearly requires professional assistance, and not from a tailor (though it will probably be suggested).

Some posters (on Ask Andy and other sites) are just plain weird. "Vaclava Krishna" specializes in oddball questions and fractured syntax (the tweed umbrella hat is his latest offering); Ask Andy's "Howard," a longtime member with no apparent interest in clothing, has the online community tied up in knots in a thread about his latest adventures in part-time employment. (Many suspect that Howard has been running a multi-year trolling scam, which if true would be impressive, if warped.)

Many of the same people post on other sites: Style Forum (a discernibly younger, more fashion-forward crowd); The London Lounge, where one must apply to get in; The Fedora Lounge, dedicated to a sort of swing-dancing, old movie-worshipping group; and a forum called Film Noir Buff.

This last is particularly interesting, as many personalities who run afoul of the moderators of the other forums have almost free rein here. In fact, the most popular thread on FNB is "Inane Post of the Day," a highly amusing, snarky, and occasionally vicious running commentary on the posts from other forums.

Internecine rivalries aside, what is most significant about these websites is that they represent a renewed interest in more or less classic style - and a rejection of the business casual, anything goes clothing ethos that until recently seemed poised to obliterate any sense of decorum (much less style) among American men. Forumites refer to this look as "AmJack" (shorthand for "American Jackass") and spend enormous amounts of time, money and energy in getting as far away from the look as possible.

The revival is having an effect beyond the cultish world of the Internet forums. Witness ESPN, where the talking heads more often than not are complemented by a pocket square these days. (Usually in dreadful taste, but that's another story.)

And these days a man can buy an actual wool suit at Target for under $100. It might even fit.

I knew I was in trouble a couple of years ago. I was living in Torrington and working in North Canaan, a one-way trip of about 32 miles, and I was halfway to work one day when I realized I forgot my pocket square.

There was no hesitation on my part. I turned around, retrieved the article, and went on my way.

Later on, I wrote on Ask Andy that I would no more leave the house without a silk hankie gracing my jacket's breast pocket than I would wearing clown shoes, a loincloth, and a top hat.

To which a Trad revivalist and outspoken critic of the AmJack replied, "These days you wouldn't stick out in that outfit."

Note: At least one men's clothing forumite has made a commercial success out of this online phenomenon; see The Sartorialist for real-life photos of actual stylish people.

The Cinema - A Ratings System You Can Get Your Teeth Into 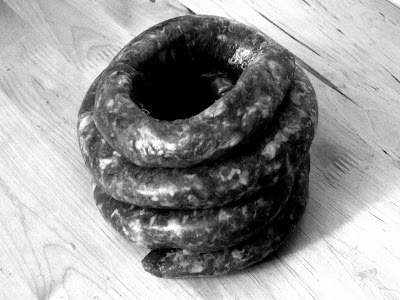 I am a founding member of a club called Cinema, Angling and Culinary Appreciation, or CACA.

The other members are my attorney, Thos.; Kurt from Oregon; Dr. Chuck; and my cousin Dan. Other emeritus members drift in and out. 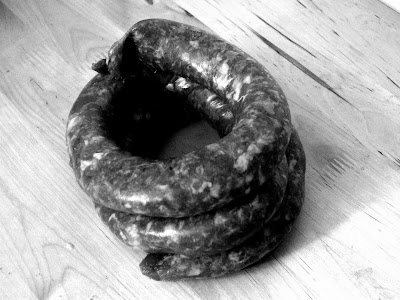 We meet at my cabin in the Catskills, fish for trout all day, and in the evenings eat great bowls of gas-inducing stew from the slow cooker and watch the World's Worst Films.

After some argument we settled on a ratings system. 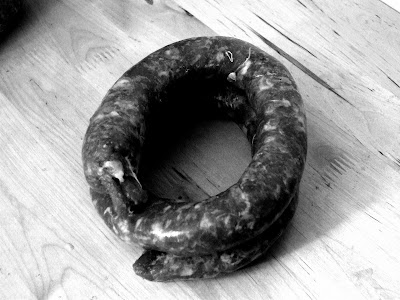 Kurt argued for the Tongue System - representing how far the tongue extends during vomiting. It was rejected for a) being unnecessarily disgusting and b) there's only so far a tongue can be extended anyway, and we didn't wish to get bogged down in measuring millimeters.

Various permutations of stars, bullets, outhouses were tried and found wanting, and then Kurt hit on the perfect image. 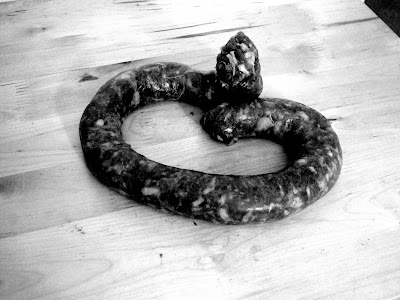 I am not going to attempt an exegesis of the Coil System here. It involves a player for the Buffalo Sabres hockey team and a long line for the port-o-potty at a picnic in Rochester, N.Y., and that's all I have to say.

One coil indicates a generally foul aesthetic but seriously lacking in one or more crucial components, be that nudity, blood, monsters, death in a highly unusual manner or some combination thereof; two and three coil films have the right elements but contain other flaws, such as plot or artistic ambition; a four-coiler is absolutely repulsive in every possible way.

And for those moments of nuance, we also have the half-coil: 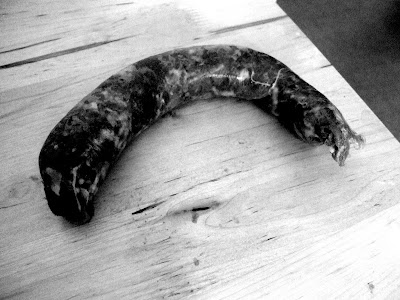 While watching CACA films I am always clad in proper attire, with the level of formality depending on the weather, my mood, and the relative dreadfulness of the cinematic entertainment on hand.

So let me take a moment here to plug men's shoes by Allen Edmonds: classic American styles, as worn by regular American men who tuck their shirts in and do not use the word "dude."

Made in the USA by regular American workers who rarely if ever use the word "dude," Allen Edmonds has the shoe for you. They even have some fashion-forward models that I personally would not wish to be seen wearing, even while dead in a ditch, but for you art-damaged types they might be appropriate.