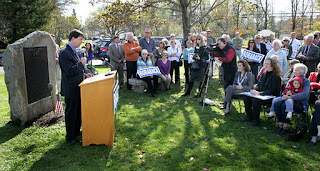 At state senator Andrew Roraback's announcement that he is running for Congress. Get thee to an alterations tailor, sir.
Photo by John Murray for the Waterbury Observer. (Link)
Posted by Patrick at 3:19 PM No comments:

(Last week — a dismal 4-9 performance dumps the record back to 30-46-2, which means that I need to run the table three times to get into the black. Not good.)
S0...
Why are the Chicago bears and Tampa Bay Buccaneers playing their game in London? (As in England.)
According to a hard-hitting report from hard-hitting NFL Network reporter Albert Breer (posted on the NFL's website, a well-known hotbed of hard-hitting reporting):
"Football ranks somewhere around seventh or eighth in popularity, with [NFL Vice-president of International Chris] Parsons sizing up the top five sports in the U.K. as soccer, golf, tennis, cricket and rugby. To put that in perspective, it's roughly in the area where soccer ranks as a spectator sport in the U.S."
Oh, so British stadiums are filled with expatriate Americans, the way soccer games are attended by expatriate Latinos here?
Sorry to sound skeptical, but there was the World League, NFL Europe...and now, the Bears and the Bucs.
If the Brits want to spend good money watching large men mangle each other, they have rugby, where they do it without pads, and the House of Commons, where they do it with pinstripe suits and snappy repartee.
Somehow the Bucs are 4-2 despite being outscored in the aggregate, so I will take Chicago and spot the generous one point.
The Jets take on the Chargers at the Meadowlands. Will Philip Rivers play? Can the Jets run? I don't know, but the Jets need this game rather badly if they wish to keep pace with New England and Buffalo, so NY minus another generous one point.
Elsewhere:
Car - 2.5 vs. Was
Hou +3 at Ten
Mia even vs. Den. The Dolphins have to win sometime, and this seems like the best opportunity.
Det - 3.5 vs. Atl
KC + 3.5 at Oak: I know, but the Raiders are without their place kicker and have an incipient QB controversy brewing.
Pit -4 at AZ
Sea +3 at Cle
Dal - 13.5 vs. StL: I hate these double-digit spreads, but the Rams are truly bad.
GB - 9.5 at Min : I heard some happy horseshit abot the Vikes keeping this close but I'm not buying it, tempting though the home underdog status is.
NO - 13.5 vs. Ind: Now you want bad, see "Colts." (Also "rudderless.")
Bal -8 at Jax: Ravens are the most solid team in the league.
Posted by Patrick at 9:20 AM No comments: 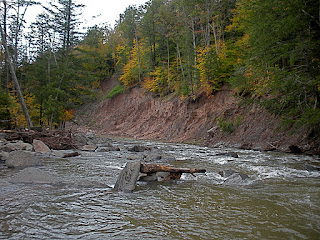 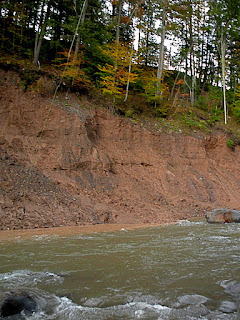 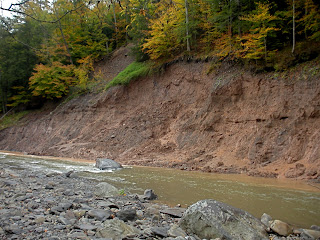 A couple weeks ago the only fishable stream in my neck of the Catskills was the Little Beaverkill, running along Route 212 between Mt. Tremper and Willow.
It was chalky but not the color of Yoo Hoo, which describes the entire Esopus watershed post-Irene.
So I went over yesterday to get one last whack at the LB, a stream I cannot recall ever fishing. The NY state general regs trout season ended Oct. 15; the Esopus season runs through the end of November, and maybe it will have cleared up some by then.
Alas, the couple of reasonably productive spots I had found on the LB were the same coffee with cream color as everything else. I wiggled a bucktail through some of the bigger pools just for the hell of it, and got one strike.
Then it started to rain some more.
I drove upstream to see what I could see, and voila — there was a giant exposed chunk of hillside, and the source of the muddy, clay-ey water.
So I dropped some wet flies in the swollen but at least semi-visible pools and was rewarded, as I was two weeks ago, with some skinny and bewildered-looking browns.
Next season I shall fish the Little Beaverkill more. There is pretty good access via state easements and several places where the stream is far below or far away from the road, and I bet the pressure in there is minimal.
Note: After six or seven weeks the Boiceville IGA is back in business. The bad news — they didn't have Gifford's "Moose Tracks" ice cream. But it's very good news for residents — Kingston or West Hurley are a long schlep for groceries — and for the folks who work there.
Posted by Patrick at 11:39 AM 1 comment: 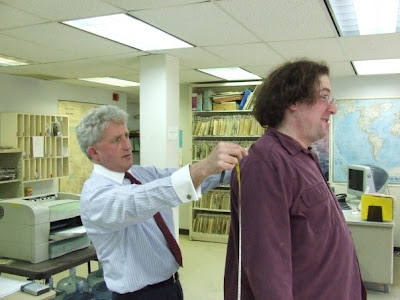 Or make up your own caption.
Posted by Patrick at 10:26 PM No comments:

On the clothing sites there is a certain amount of interest in handsewn moccasins - camp mocs, canoe mocs, boat shoes, and actual moccasins with soft leather soles, as worn by Natty Bummpo (Mohicans) and Langdon Towne (Congregationalists).
The message boards discovered the Quoddy mocs, which was good for the company and not so good for everybody else. I bought mine direct from Quoddy when they were about $85. Then the hipsters discovered them. My local sport shop has them now, for $220. Unless they are lined with hundred dollar bills, they are not worth $220.
Town View Leather, another Maine outfit, has a line of mocs and slippers. more realistically priced. They also have an eBay shop where the double-sole, unlined version is on sale for a little less than the website. This is where I got mine.
I've had them two weeks. My impressions:
Pros: Immnesely comfortable and they look good. Fine for padding around the house or yard.
Cons: If you are used to boat shoes or mocs with a rubber sole be forewarned — these are slippery by comparison. On wood floors it's not hugely different than walking around in socks.
I think of these shoes as slippers, really, and since it's getting cold, I wear them with socks. If I had it to do again I'd probably get the lined version.
Here's the official photo: 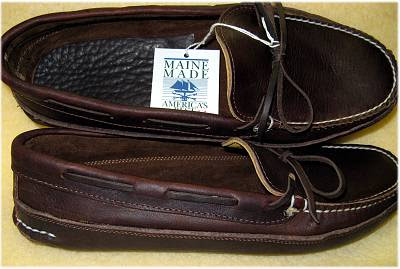 Here are mine after two weeks: 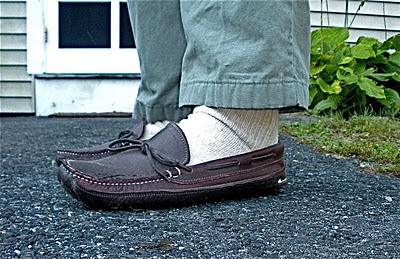 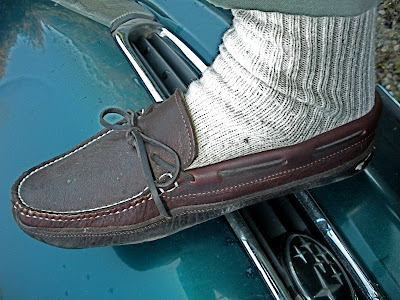 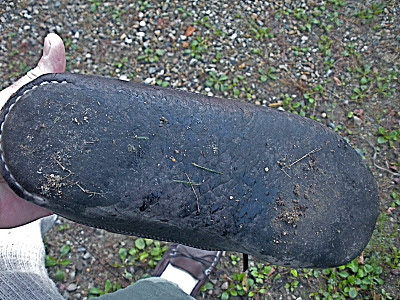 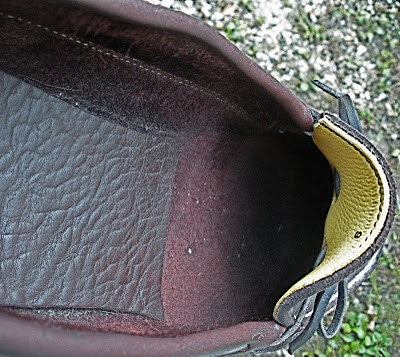 Wednesday morning QB: Bad day for NY football, eh? Which team stinks more? Record on the week a mediocre 6-7, barely treading water, and an overall 26-37-2. Two good weeks and I'm in the black.
Winging it last week was a modest success, and with a 10-5-1 showing (20-32-2 overall) a step closer to respectability.
With a quarter of the season in the books, it is now possible to take a very basic measurement of the teams scoring potential by dividing points for by points against (see your expanded standings in our newspaper, if you still read one).
Therefore, in the Giants -10 vs. Seattle game, New York is 3-1 with a scoring differential (what I call the Z Factor) of 1.24 and the Seahawks are 1-3 with a .60.
So the Giants have outscored their four opponents slightly (a cumulative 15 points) and Seattle hardly at all (cumulative -39). Add in home field advantage and the fact that the Seahawks have dorky uniforms and the choice is clear: Giants minus 10 over Seattle.
(First team is the pick)
NYJ + 7.5 at NE: Thinking here is that Pats will probably win, but not by more than a TD.
Indy -2.5 vs. KC: Colts have to win some time, and KC's a likely fall guy.
AZ + 3 at Min: Another battle of titans. No faith in Vikes here.
Buf +3 vs. Phi: Vick, Schmick. How about some facts — Bills, 3-1 (1.39); Eagles 1-3 (1.00). Oddsmakers are stubborn people, and the prevailing sentiment is that Michael Vick is a somewhat flawed but nonetheless powerful god. This one's got "push" written all over it.
Hou -5.5 vs. Oak: Raiders are more or less for real, in a middle of the pack way, but Texans are outscoring opponents and playing a nice brand of football. Plus anything associated with Texas inflames northeastern liberals and therefore pleases me.
NO -6.5 at Car: We keep hearing that whatsisname's going to have the big breakout game; in the meantime the Saints are 3-1 (1.30) and the Panthers are 1-3 (.87). The missing half point makes the bet even more plausible.
Cin +2 at Jax: This game is blacked out everywhere except Iran and North Korea.
Ten +3 at Pit: This is more wishful thinking on my part than anything else. I am enjoying the Steelers' demise — specifically, the demise of the creep who shoves girls around and worse.
I'm also tired of the guy with the hair.
SF -3 vs. TB: In which the 49ers fight to uphold the honor of their division, which as a group is 5-11.
SD - 3.5 at Den: The Incredible Shrinking Point Spread, as oddsmakers get hip to the fact that the Chargers do not blow anybody out.
GB -6 at Atl: They keep saying the Falcons are tough and I keep waiting to see it. Right now they look pretty ordinary, and the Packers look like 5-0.
Det - 5.5 vs. Chi: Why not the Lions? Their Z Factor is second in the league at 1.78. Chicago is 2-2-2 (.96) and looking very blah.
Posted by Patrick at 7:53 AM No comments:

Separated at Birth: Chris Carpenter and The Crusher 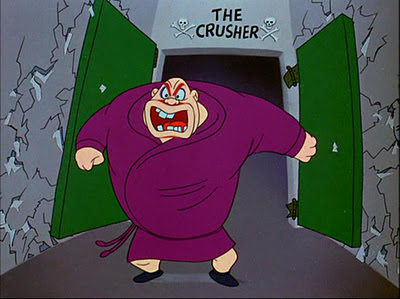 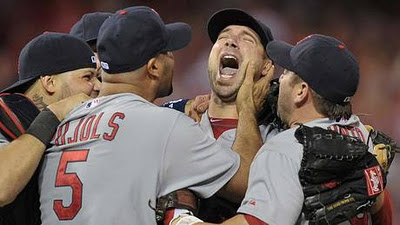 St. Louis pitcher Chris Carpenter, who made the Phillies look stupid last night, reminds me of The Crusher, who destroyed Ravishing Ronald but was no match for Bugs Bunny.
Posted by Patrick at 8:51 AM 1 comment: