I'm in the Esquire contest again. One of my photos is sideways. I don't really give a shit.
Posted by Patrick at 11:51 AM 8 comments:

Zombies and Vampires and Grave Robbers, Oh My!

Glenn McQuaid's I Sell the Dead  (2008) successfully combines the zombie movie with the vampire movie, not to mention the grave robber movie and the period piece.

It succeeds because of an excellent cast, a sparkling screenplay, and a director with the sense to make the special effects work for the story, rather than the other way around.

Young Arthur Blake (Dominic Monaghan) hooks up with veteran grave robber Willie Grimes (Larry Fessenden) and embarks on a life of ghoulish acquisitions. The tale is told in flashback, as an imprisoned Arthur gives a visiting and creepy cleric, Father Duffy (Ron Perlman) the history of his career before he's carted off himself — to the guillotine.

And a constant stream of banter between Willie and Arthur that keeps the thing moving along.

The special effects extra on the DVD tells you all you need to know about the reason the film works. The computer animation geeks were needed for a headless grave robber scene at the end, and for the dart-in-head. If McQuaid had a Hollywood budget, the whole damn thing would have been CG — and the end result for viewers would be SOL.

(Don't believe me about the perils of progress? Go suffer through the "Clash of the Titans" remake.)

Even the absence of nekkid breasts, usually an automatic one-coil deduction, doesn't bother me. If you have to see a comic horror movie, this is it. Four enthusiastic coils. 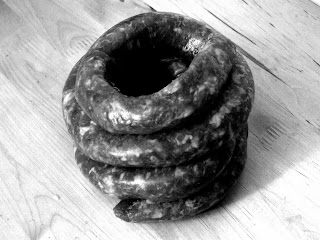 I haven't checked the Cooperstown Ball Cap Co. in a while, and alas, they have ended operations.

I have perhaps eight caps from them, all light years hipper than cheesy New Era caps with the big stiff billboard front, etc.
I'll post pix of the caps as time permits. In the meantime, read about it here:

http://www.archivalclothing.com/2010/03/archival-lament-cooperstown-ball-cap-co.html
Posted by Patrick at 2:11 PM No comments: 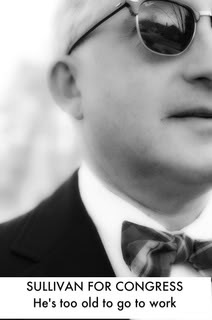 Last year I made the first cut in Esquire magazine's extremely goofy "Best-Dressed Real Man" contest, in which thousands of mostly harmless narcissists with moderate photographic abilities posted photos of themselves in the hope of winning some money, an expensive and ugly watch, a wardrobe of expensive and ugly clothing, or a lifetime supply of Nivea (a prize that cried out for some witticism on the subject of wankers).

The question is — should I do it again?

On the one hand, it's undeniably dorkitatious. On the other, it's no worse than what I already do — on the message boards, this blog, and to my unfortunate friends.

And it could dovetail Nicely Nicely with my renegade Congressional campaign.
Posted by Patrick at 2:04 PM 5 comments:

Every so often the stars are aligned. I picked up this suit from a guy on the Film Noir Buff internet clothing forum, had the trousers let out, but still needed to shed a few pounds before trotting it out.

Brooks Brothers suit and shirt, old Johnston and Murphy captoes, tie in my college colors by Sam Hober, and haircut by Mario of North Canaan.

The "action" stance is the result of stumbling on a pile of loose gravel — just as the shutter clicked. 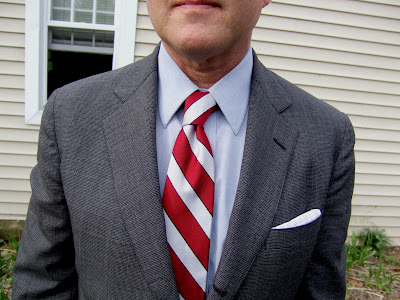