To be honest, I wasn't going to vote for Barack Obama in the general election anyway. I was willing to listen to him, however, because I thought that he actually had some legitimate juice, and I admired his idealism, however fuzzy.

But after this mess with his nut preacher pal, Obama stands revealed as a completely conventional politician.

The senator could have just faced up to it and said, "Yeah, I've been hearing this stuff for years, and maybe the fact it comes as such a shock says more about the country's complacency than about those in attendance."

Or he could have said: “I, like so many of my fellow Americans, must strive not to fall asleep during the sermon. So when Rev. Wright was making his most outrageous remarks, I must have dozed off. You know how hot it gets in that place?”

But no. First he denied knowing about the sermons or being there, and then he did the Double-Clutch: He retracted the denial and then disavowed the retraction.

Then he blamed everybody else, from the media to his granny.

Which tells me that the big "change" shtick is pure hooey - this is business as usual.

And if I'm going to offered a choice between business as usual candidates I'll take the one who might just possibly keep the government's mitts off my money. 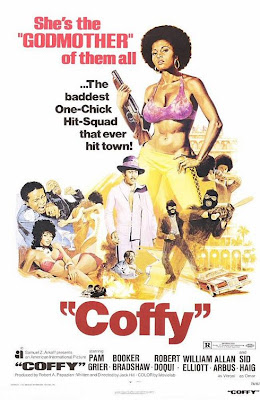 In Coffy (1973) the great Pam Grier makes her debut as a star, shooting up large numbers of creeps in the process.

And shooting up is what it's all about. Coffy is a nurse whose little sister is strung out on heroin. Enraged, she acquires some armaments and proceeds to take out those responsible.

And she does all this while mostly naked.

Her victims, blinded by gazongas, are mostly unaware of the terrible fate that awaits until it's too late. (Nate.)

Think about it. You're a drug kingpin, your jacket has enormous lapels and you wear it in public without the slightest bit of self-consciousness, you're thinking everything is cool and you're about to horse around with this nice-looking lady and - BOOM!

It would be a particularly nasty way to go.

The plot isn't as idiotic as it sounds. Coffy's investigations eventually lead her back to her low-life politician boyfriend, who is in the sleaze up to his neck. She lets him have it in an extra-sensitive area, but hey, he told the bad guys to kill her not two hours earlier. Plus he had another girl upstairs. Fair's fair.

As good as it gets in the blaxploitation genre. Four coils.

Video clip of hooker catfight.
Posted by Patrick at 9:36 AM No comments:

The Muslim world has created a battle plan to defend its religion from political cartoonists and bigots.

Concerned about what they see as a rise in the defamation of Islam, leaders of the world's Muslim nations are considering taking legal action against those that slight their religion or its sacred symbols. It was a key issue during a two-day summit that ended Friday in this western Africa capital.

The Muslim leaders are attempting to demand redress from nations like Denmark, which allowed the publication of cartoons portraying the Prophet Muhammad in 2006 and again last month, to the fury of the Muslim world.

Though the legal measures being considered have not been spelled out, the idea pits many Muslims against principles of freedom of speech enshrined in the constitutions of numerous Western governments.

"I don't think freedom of expression should mean freedom from blasphemy," said Senegal's President Abdoulaye Wade, the chairman of the 57-member Organization of the Islamic Conference. "There can be no freedom without limits."

Delegates were given a voluminous report by the OIC that recorded anti-Islamic speech and actions from around the world. The report concludes that Islam is under attack and that a defense must be mounted.

"Muslims are being targeted by a campaign of defamation, denigration, stereotyping, intolerance and discrimination," charged Ekmeleddin Ihsanoglu, the secretary general of the group.

I'm thinking that the best possible way to create a stir for myself and noodge my way into the profitable world of bloviation is to start insulting Islam in the hope of being sued by Senegal. Being a professional loudmouth is a long-time ambition of mine. God knows I've been an amateur loudmouth long enough - high time to start raking in some coin.

Hey, Islam! Why can't you miserable bastards get along with anybody? Why don't you have a Reformation? Do you all shave with a fork? Huh?

Please direct lawsuits to me at plsullivan62@gmail.com.
Posted by Patrick at 9:34 AM No comments:

Monday's revelations about the exciting extracurricular life of New York Governor Eliot Spitzer cheered me up immensely. With all the talk of "change" this election season, it's good to know we can count on at least some of our highest elected officials to act like complete creeps.

Frankly, I don't trust a pol unless he's bent in some way. I want a governor (or senator or congressman), not a saint.

Barack Obama is a Depression-era socialist with a web site, but I'd be a lot happier about it if it turns out he really did get a sweetheart deal on his house from that developer guy, Resko.

And if we could get a few stories about Obama's dealings coming up in the rough and tumble world of the Daley machine in Chicago, it would inspire far more confidence than babbling about change, interrupted only by calls for the medics to haul out another swooning ninny. Anybody who can survive Chicago city politics shouldn't have too much trouble telling the Iranians to calm the hell down or else.

Mrs. Evil (aka Senator Clinton) - well, where do you start? Shady land deals, shady stock deals, the bimbo eruption squad, blah blah blah. She sure knows how to squirm out of trouble, though, and I have to admire that.

But ol' Spitzer kinda blew everybody out of the water with the hookers and whatnot. Now that's Old School corruption - pure lust, with a generous side helping of hypocrisy. No ideology involved.

New Yorkers can take some small solace in the fact that El Spitzo did things in a high-dollar manner. He didn't pay his temporary consort in crack, like Phil Giordano of Waterbury, or put the lady on the state payroll, like Jim McGreevey of New Jersey.

Or take advantage of a dumb intern, like William J. Clinton

If you're going to be a creep, do it right.

And the over/under on how fast this escapade appears, in suitably altered fashion, on one of the Law & Order shows? Six weeks.

Posted by Patrick at 9:41 AM No comments: