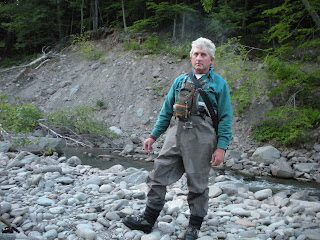 Hard to believe it was chilly enough in Phoenicia, N.Y. for waders and a thick chamois shirt just five weeks ago.

Speaking of chilly, my father died Sunday night, and I am in NoVa, helping out.

Boy would I like to turn the clock back.
Posted by Patrick at 5:08 PM 4 comments:

A fishing vacation in June had mixed results, as it coincided with the hottest weather of the summer (until a week later).

The high point was a visit to my friends in Claryville, N.Y. who actually own the land around the fabled Junction Pool of the East and West Branches of the Neversink.

This is a little like owning the Temple Mount. If you listen hard you can hear Theodore Gordon.

Irene, the storm that blasted the Catskills last fall, had one positive effect — the storm scoured out the rivers and streams.

So the actual junction of the two branches, which last time I was in Claryville had become fairly small and not terribly impressive, is now a great big magnificent deep pool with a long and deep tail-out, a big boulder in the middle, and an excellent deep riffle heading in. If you were building the "Trout Land" exhibit at the amusement park, it would look like this.

There were a lot of biggish rainbows holding in three or four feet of water just below the initial riffle. They responded to a three-fly rig, with a zebra caddis on top, a Light Cahill wet in the middle, and a Leadwing Coachman as the anchor. After catching half a dozen of these crazy, 14-16 inch jumpers, I switched to a single small Prince nymph and some weight to try and get one of the big browns I spied lurking deeper, but no soap. The pool's quite deep, well over my head (I am 5' 9").

Further downstream a very nice brown grabbed the zebra caddis out of a riffle I would have thought too shallow to hold him, and upstream on the West Branch I caught respectable brook tour on a hopper imitation. 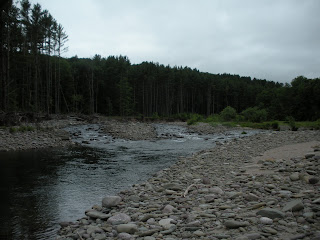 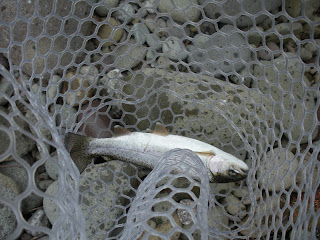 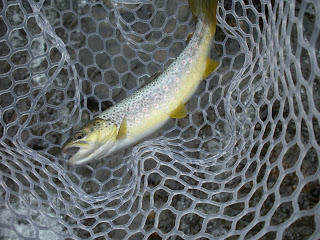 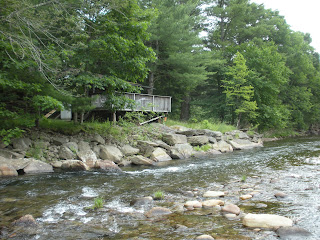 Riffle left center is where the brown came from. My hosts own the cabin; one spring they were cleaning out and chucking dead mice off the porch. Big browns came up to grab them, so whenever I fish here I throw in a deer hair mouse for the hell of it. Nothing ever happens. 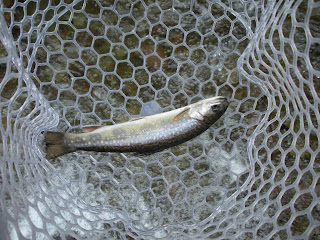 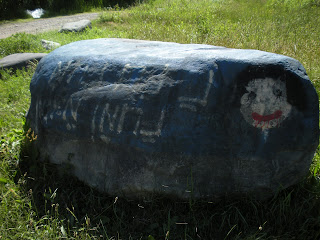 Bizarre graffiti at Neversink public access area in Hasbrouck, N.Y. — the only notable part of that side visit.

Posted by Patrick at 7:45 AM No comments: