A mixed bag on the Esopus Creek last weekend. The water above Phoenicia up to the Portal was a little on the murky side, which was fine for creeping around and tempting trout with short casts. This routine does play merry hell with my back; creeping in fast-moving and deceptively deep water isn't easy.

Down in Boiceville I hiked a bit, hoping to have the long stretch between the old railroad station and the Five Arches bridge to myself. I am always surprised more guys don't fish in there.

Well, this particular Sunday twilight I outsmarted myself.

I also watched as a couple of Youths constructed these fine rock sculptures. I see them everywhere. To judge from the cries of merriment issuing from the Youths, I believe marijuana plays an important role in the creation of this type of art.

Soft-hackle wets were the way to go all weekend, which was hot, sticky, and unpredictable, with rain one moment and brutal sun the next. 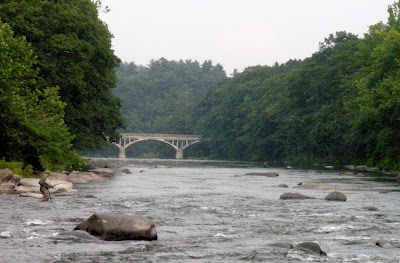 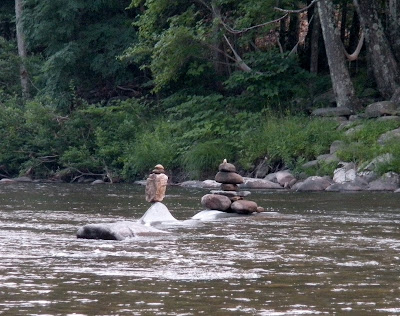 I can't name this brook, by agreement with the property owners. But it's in the Northwest Corner of Connecticut.

And it's steep. Yesterday afternoon I bushwacked way the hell down the valley and fished back up.

This involves boulder climbing, rather than boulder hopping. It would be really hairy with a lot of water flowing, but the water was low, so I had to look for the holes with sufficient water, coolness and aeration to keep a colorful brook trout in beer and skittles.

Rod: Orvis "Trout Bum," a slow action seven foot, four weight, four piece. Flies: All dries,  Royal elk hair caddis, Adams Wulff and standard Light Cahill, all size 14. There are some spots where you can get off a cast, even a long cast, but much of it was flipping and snapping.


Below: First the bushwacking, reminding us once again not to string the rod up before clambering through the thick woods. Then the clambering and climbing. Then the angler sticks his head up over the next boulder and - aha! A plunge pool!
And even the least likely-looking fissures in the rock might hold a trout. This one's downright huge for a brookie. 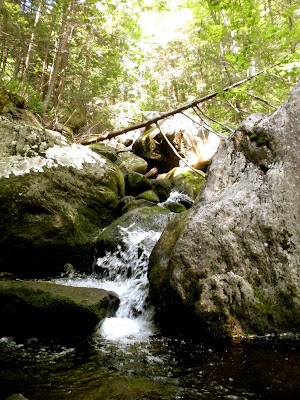 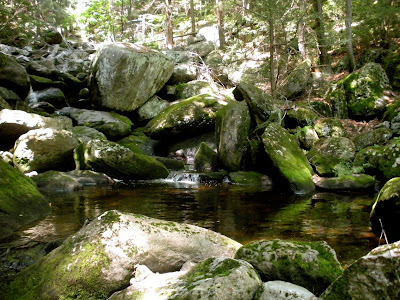 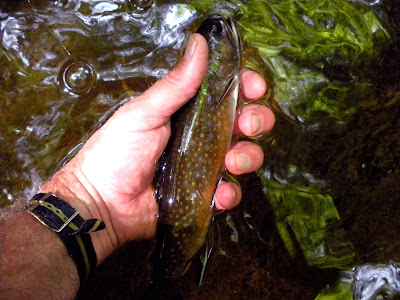 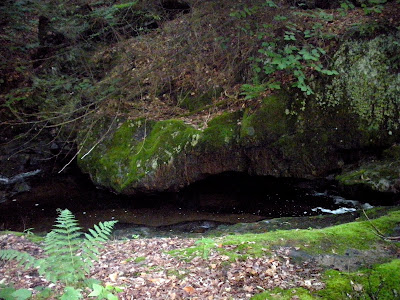 I am always amazed by fishermen who galumph around rivers and streams, presenting the highest possible profile.

And irritated, as I wrote in the Lakeville Journal.

Check out Tom Chandler's thoughts on stealth and trout fishing here. The Trout Underground blog is new to me and has some informative and entertaining stuff, including some good thoughts on the new wave of rubber-soled wading boots.
Posted by Patrick at 1:28 PM 1 comment: 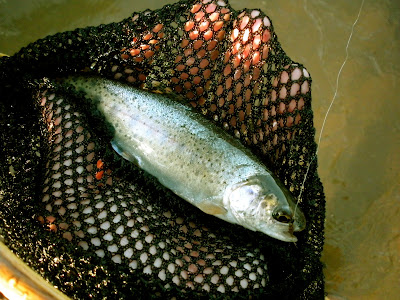 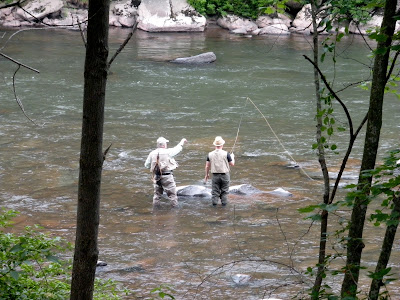 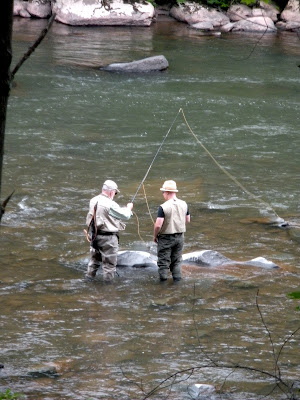 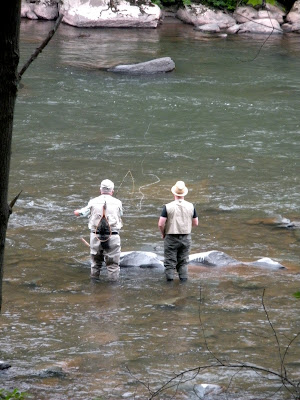 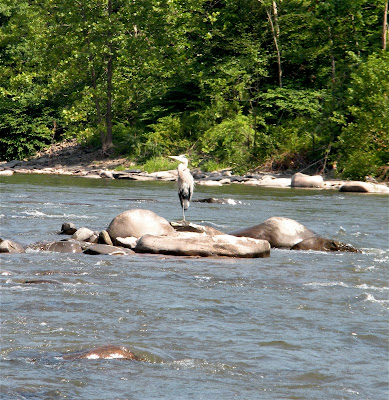 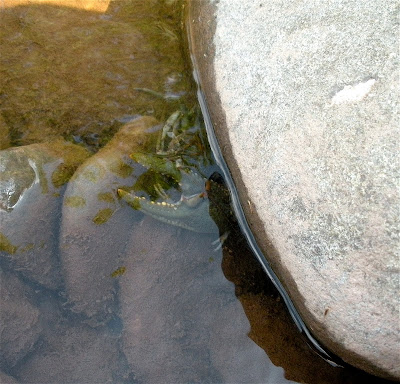 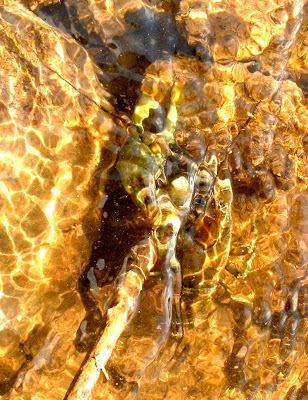 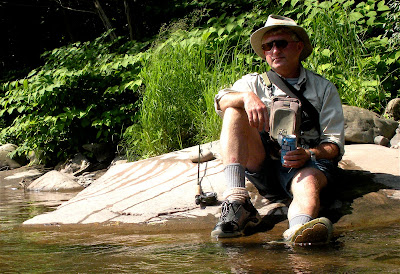 Note contusion on right shin. It ain't fishing if you don't get banged up.
Posted by Patrick at 9:54 AM 2 comments:

Brooks Brothers hasn't always been staid. I suspect this two-button, twin-vented sack jacket is from the early sixties. I will take a shot of the label later and maybe someone with more knowledge can come up with a vintage.

This is the kind of find that makes all those fruitless trips to the thrift shop worthwhile. 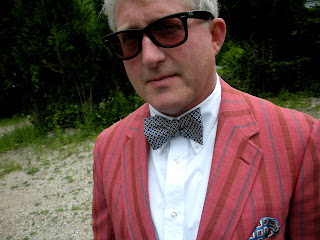 (Someone wrote to me asking how to assemble a beginners' fly-fishing outfit without walking into the Orvis store with a target painted on his forehead. Here is a draft of what I will try to expand into an actual article at some point. Comments and suggestions welcome.)


That fly-fishing is an incredibly difficult sport requiring expensive equipment is an enduring myth. There are rods that cost more than most of the cars I’ve driven over the years, and they’re very nice. But do they cast better?

Yeah, but I would advise anyone starting out to go the inexpensive but good quality route. In the words of John Nichols, a damned good fly-fisherman who sometimes moonlights as an author, “You buy it cheap, you don’t weep” when you a) break it or b) lose interest.

Orvis’ Clearwater series of rods and reels is a good place to start. I own three Clearwater rods and four or five reels (plus extra spools).

Temple Fork Outfitters makes great rods at affordable prices. I own two in the Signature Series - the six foot, two weight for playing around with dry flies in brooks, and the eight and a half foot, five weight, two-piece as a basic all-round rod (and a spare for guests).

Do not spend a lot of money on reels. Unlike spin-casting, which is all about the reel’s action, in fly-fishing the reel is primarily a place to store the line. Orvis Clearwater, LL Bean Double L, Cabelas Cahill are all inexpensive and serviceable reels that will do just fine.

The DT line is also more cost-efficient, as it can be simply reversed when the business end begins to get tired. And at $70 a pop (and up) for premium lines, I want my money’s worth.

For a good discussion of WT vs. DT click here


When you have your reel set up, there are two things the fly shop might try to do to you that you don’t want.

First is they will set it up so you are reeling with your weak hand. If you are right-handed, you should reel with your right hand. It involves switching hands once you’ve hooked a fish, which takes about a tenth of a second.

Why reel with your dominant hand? Because you’re more coordinated that way. Trust me.

The other thing shops do is put too much backing on the reel. Backing is for when the nine-inch rainbow you caught decides to run out to sea and pulls out all the line. What shops do is set it up so the line plus backing fills the reel spool exactly, which is fine as long as it stays dry and wound by a professional using a machine.

Which it doesn’t. It gets wet and pulled out and rewound and dropped and muddy and so on. You want about a quarter to a half inch of gimme room — which means less backing. Don’t sweat it — the kind of fish that gets you to the backing isn’t going to be lost because of the ten feet of backing you don’t have.

When buying boots you want something with rubber soles and studs — the rubber to make them easier to clean and avoid spreading aquatic nuisances (like rock snot) and the studs so you don’t break your neck. Bean and Orvis do these boots as well as anybody.

It depends on where you are fishing, but I would always carry the following for trout:

I always opt for buying flies from local tiers when possible. Unforunately, it often isn't. Ligas Flies in Boulder, Colo. is an excellent source for almost any pattern you might want. You must buy in bulk, but for $100 you can load up on your favorites for a given season.

As to the box itself, I am a big fan of Clif's Day's Worth boxes.

Taylor Streit is a guide in northern New Mexico and a very nice guy. His "Instinctive Fly Fishing" is the single best book on the subject ever.

Tom Fuller's Trout Streams of Southern New England is a good starting place for my area.  Countryman Press/Backcountry Guides have several "Trout Streams of..." and "Good Fishing in..." titles in their catalog.

You'll need a DeLorme map book to go with any guide book you buy. The guides aren't updated all that often, certainly not often enough to handle changes in regulations, parking and access.
Posted by Patrick at 11:58 AM 4 comments:

One nice thing about a seersucker suit is you can wear the jacket as a sport coat without looking like a cluck. Same goes for the trousers, now that I think about it.

One of the guys on Ask Andy said this combination is almost psychedelic. It's been a while, but I get his drift.

The oft-maligned Jos. A. Bank is selling a three-button darted/plain front seersucker suit for $99 (click here). It might be worth a try, especially if you have broad shoulders.

The jacket pictured here is a vintage Brooks Brothers wash and wear three-button sack, a much better fit for the slope-shouldered. 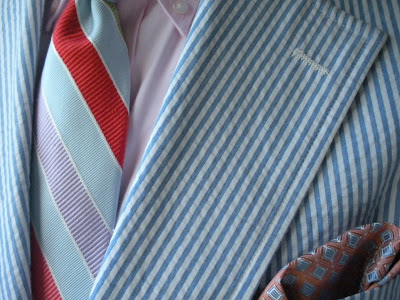 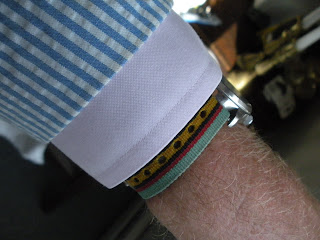 Some nice fishing over the weekend, only slightly marred by a large number of nitwits. But they are easily outwalked.

This stretch features flood control rip-rap on the near bank, and a deep channel that holds a lot of nice fish.

And the streambed has changed somewhat, creating this excellent rocky spit and a long, ankle-high shallow. The trout like to hang around the periphery of where the water comes down through the shallow riffle and enters the channel — lots of food gets churned up and the broken water provides some cover from predators. 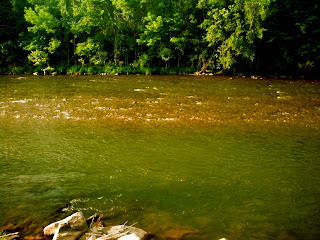 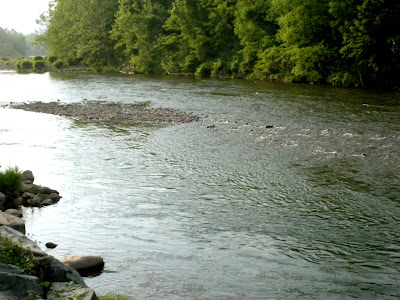 Here are a couple of guys making classic mistakes — standing next to each other, for starters, and concentrating on the long slow pool instead of the trickier riffles and runs. The slow pool is fun but it's not really where the action is, plus a DEC guy told me the state had poured a truckload of silly little brown trout in that exact spot Friday morning. 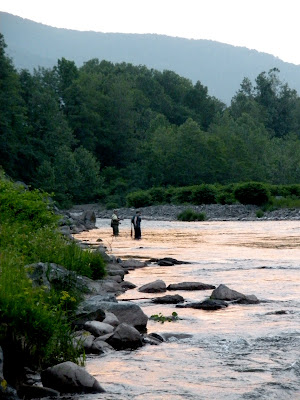 I caught a dozen respectable trout, including a rainbow that clocked in at about 16 inches. On the famous soft-hackle wet fly, no less.

Another hazard of fishing the Esopus in fine weather is the Rubber Hatch. I am in favor of anything that brings employment to this hardscrabble region, but it's a little annoying when a group of tubists flounder right over a rising fish. 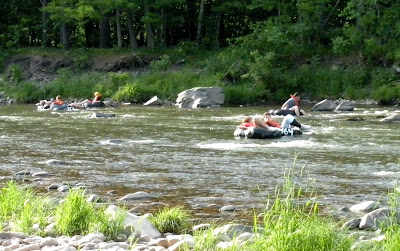