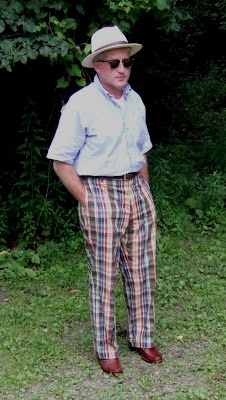 "I remember back in the summer of Aught-Nine, it was hot.  I bought a pair of plaid pants from some outfit in Buffalo. Mathilda Grunewald goosed me at the post office, she was so excited.
"That's the way it was back then. If a gal goosed you when you were wearing plaid pants, it was assumed you'd be married.
"But I showed her. Joined General Snodgrass' Allied but Disoriented Brigade and fought the Bermudans in Iceland. Came back a hero, and Mathilda'd been knocked up by Hiram Witherspoon, the game warden, and up and moved to a tarpaper shack along the Quogaquogue."
Posted by Patrick at 2:10 PM 2 comments:

Spam of the Week

I like this one. It makes sense, sort of.
I'm fond of the German language because I would like to read in the
original all the magnificent fairy-tales I admired in childhood.I like
Soviet cartoons because they are very cute and funny. Disney ones are also good; the only cartoons I don't like are Japanese ones.My eyes are large and blue and my hair is short and blond. I like listening to the guitar playing and watching movies.

Let's be together
Posted by Patrick at 9:51 AM 2 comments:

Summer Style, or It's Great To Be Fat, Ugly, Middle-aged, Broke and Living in the Sticks 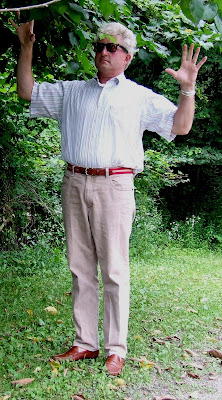 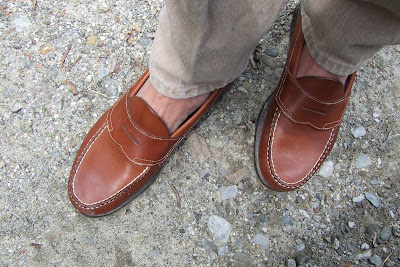 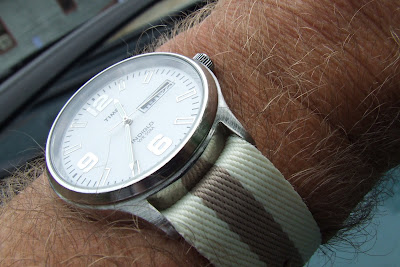 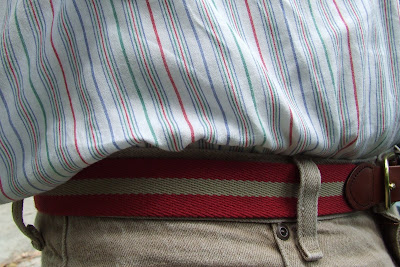 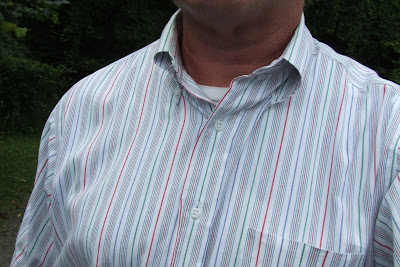 The Connecticut Yankee, a long-defunct men's shop in Salisbury, lives on in the area's thrift shops.
I came across a group of short-sleeve sport shirts with the store's tag. Great shirts, beautiful, light, airy fabric.
Far too much tan today, but it's a summer thang. Plenty of time for the serious, sober stuff when the wind is howling and a 25 degree day seems like a heat wave.
(The stuff: LL Bean jeans; belt by Leatherman, Ltd. of Essex, Conn.; watch strap from Central Watch; Timex EZ Reader for the geriatric in your life; sport shirt from the Connecticut Yankee via the Bargain Barn, Sharon, Conn.; Bass Logan loafers.)
Posted by Patrick at 1:00 PM 4 comments: 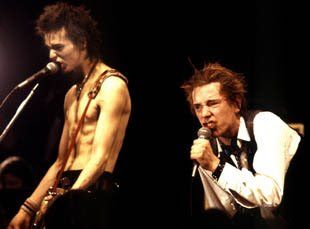 The first thing you have to deal with if you are dumb enough to want to watch a bunch of documentaries about Punk Rock is Legs McNeil.

This fidgety little skeezix was a founder of Punk magazine and hung around the CBGBs scene, being what would be called in the sporting world a "jock sniffer."

And he pops up in every one of these films.

Smoking, swearing, slandering — and making damn sure you know that HE WAS THERE.

Oh, and Jim Jarmusch. You get a lot of him too. HE WAS ALSO THERE, but quieter about it.

House of the Rising Punk (1988), made for German TV, and Punk: Attitude (2005) cover a lot of the same territory and have the same clips. Too bad nobody back then had a sync/sound camera; if punk happened today every twitch would be on YouTube instantly.

Both films try to make a case for some sort of unifying feature of the punk movement, and both fail. Despite the obvious intelligence and sincerity of most of the interviewees, the overwhelming impression is of something that happened fast, and everybody was drunk.

Chrissie Hynde, at least, says in the German film that once heroin invaded the scene that was the end, and she has a few interesting remarks about why the musicians that stuck around inevitably got better.

Oh, and the third talking head you can't avoid: Thurston Moore of Sonic Youth, who despite being older than me (I'm 47) insists on floppy hair and frequent uses of the word 'like."

Only because I am an enlightened man of the 21st century can I see that the Devil Girl From Mars — providentially named "Nyah" — is simply a prototype for the kind of post-modern woman we see all around us, usually in hordes, and only rarely in spaceships.

In the 1954 film, Nyah comes to Earth for a bit of recon and resupply. Seems the sexes fought a hellacious war back home and while the women won, as is only right and proper, they are about out of men for breeding purposes.
So naturally she heads for England, but gets lost. (She apparently does not realize that not reading the map and getting lost is a man's job, and nor should she care. We must smash these conventions and be post-modern.)

So up in Scotland, there's a professor and a reporter looking for the flying saucer; a murderer who has escaped from prison and hoofed it over the moors to come to this little hotel because the serving girl is cute; a beautiful girl from London who is getting over some sort of romantic snarl; a little boy, and the elderly Jamiesons, who run the joint.
And it is here that Nyah decides to make her stand.
In keeping with the latest post-modern ideas about femininity, wears a cap that might double as a bondage mask, ice-skating dresses and death rays. She also has the controls for the Robot, which looks like what happens when flower pots and Kleenex boxes mate.
The brave men in the party try a bunch of lame tricks on Nyah, and it is to her great credit that she doesn't stick her tongue out and say "Nyah, nyah, nyah" which in addition to being her name is a classic playground taunt and as such would have made for some great post-modern irony.

I won't spoil the ending for you because it's so short. Excellent post-modernism. Tremendously ironic robot. Incredibly hip leather skirt. Murderer with heart of gold. Stupid professor. Coy references to sex and alcohol, which in post-modern context are very ironic and fulfilling to women. By all means see this as soon as possible.
(Although experience tells me I don't have to look to Mars for a Devil Girl. There are plenty here already. Nyah nyah nyah.)
Posted by Patrick at 3:33 PM No comments:

I won't go into detail on how I found this, but I am searching for a way to make it into a "Bruno" joke.
Posted by Patrick at 4:26 PM No comments: 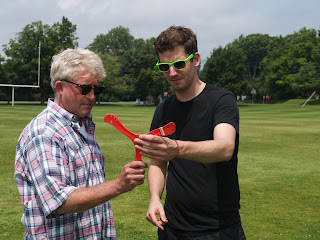 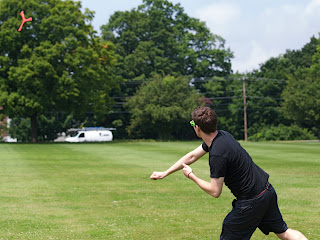 I had a boomerang lesson this afternoon. A couple of local guys are putting on a tournament and exhibition next weekend.
I even had a shooter with me. For a minute it felt like real newspaper work. 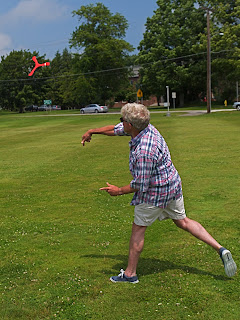 Return of the Living Coil

It's been nine months, since I pulled the plug, and I have learned much.
There are things I can write here that I cannot at the newspaper's site, and there are things I should never write about anywhere.
CP's heading in a slightly different direction, with more on books and music.
Men's clothing, natch — and, of course, reviews of the world's worst films.
I hope it will all make for a more disciplined experience.
Cheers,
Linus J. Scrimshaw, boomerang novice
Posted by Patrick at 2:01 PM 3 comments: