Finally started getting the hang of the stocked brook trout in Woodland Valley.

Got this bad boy to take an isonychia nymph, which I had on a five foot dropper. I have never used a dropper that long. 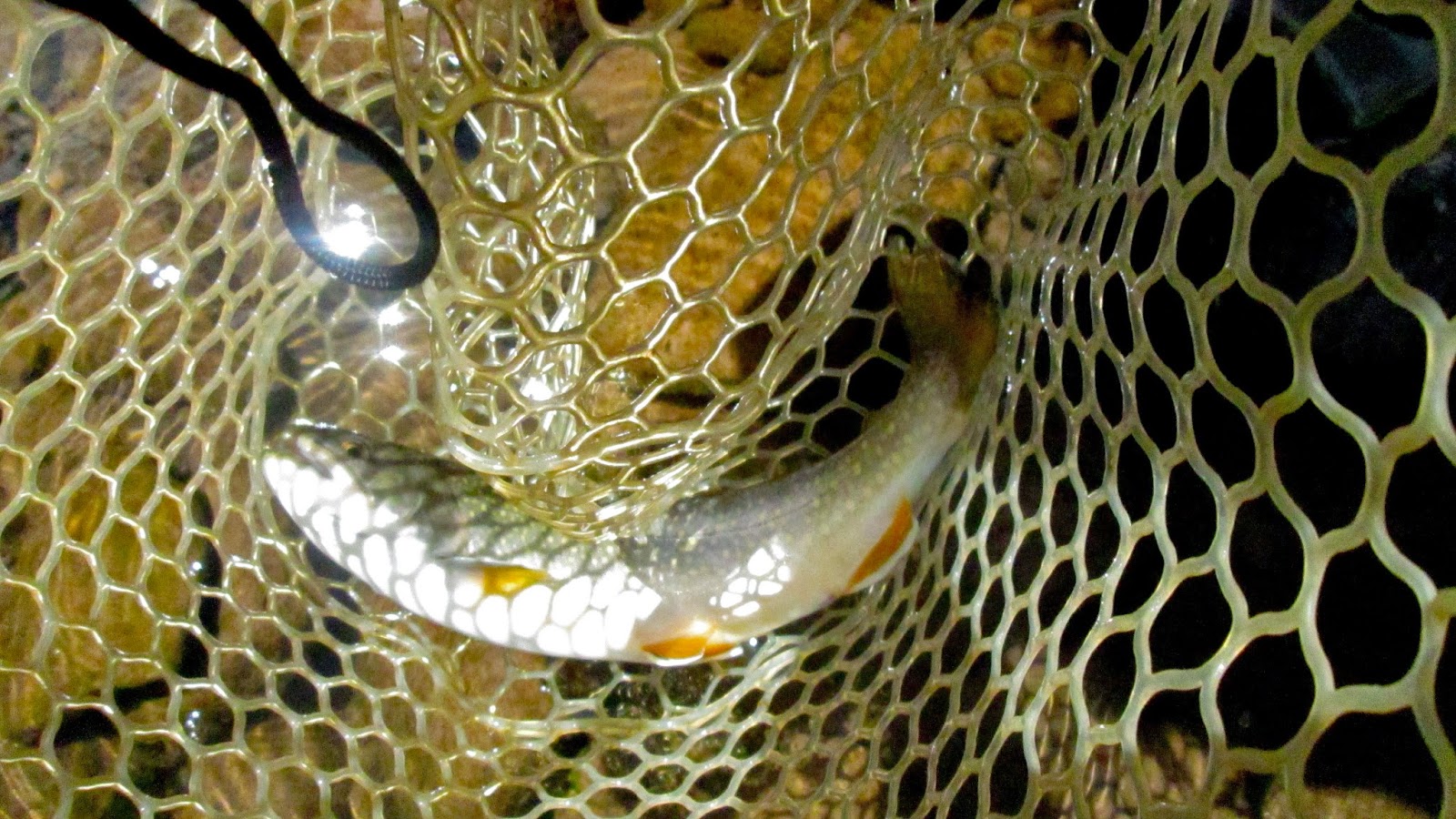 As I was catching this fish, I noticed this other, larger fish hanging around and watching. Very untrout-like behavior.

Found out later that's because it wasn't a trout. It had died, somehow, and was belly up in the same pool that evening. When I fished it out, I saw this big yellow nasty-looking thing. Carp? Sucker? Klingon salmon? Beats me. I chucked it in the woods for the critters, who probably won't touch it either. 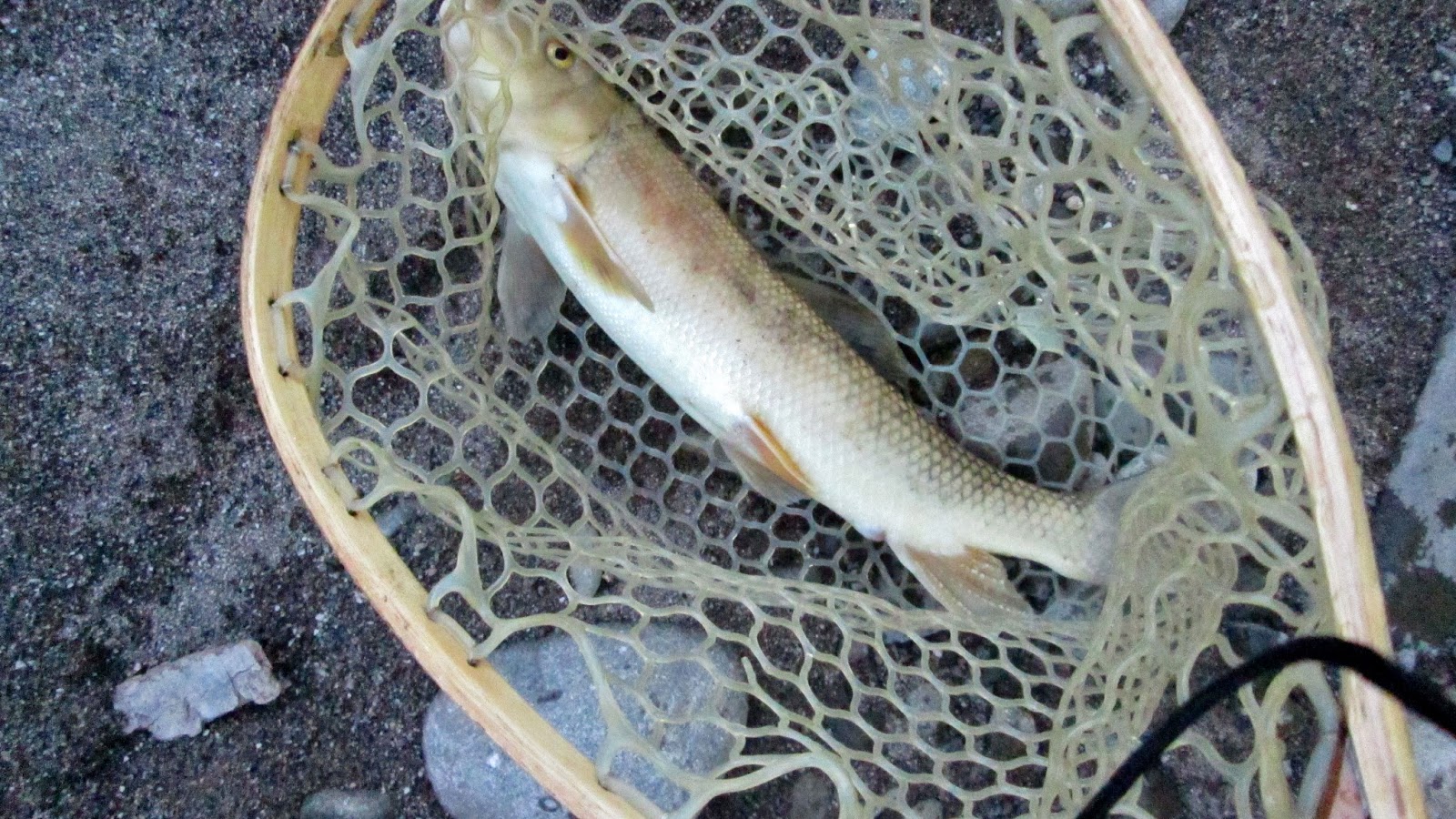 Meanwhile, back in Connecticut on the Blackberry, a cool, overcast day did not result in joyful trout leaping at anything. I had to work at it.

In this case, a soaked Royal Wulff dry fly, bounced off this glowing green rock, coaxed this fat brown into action. 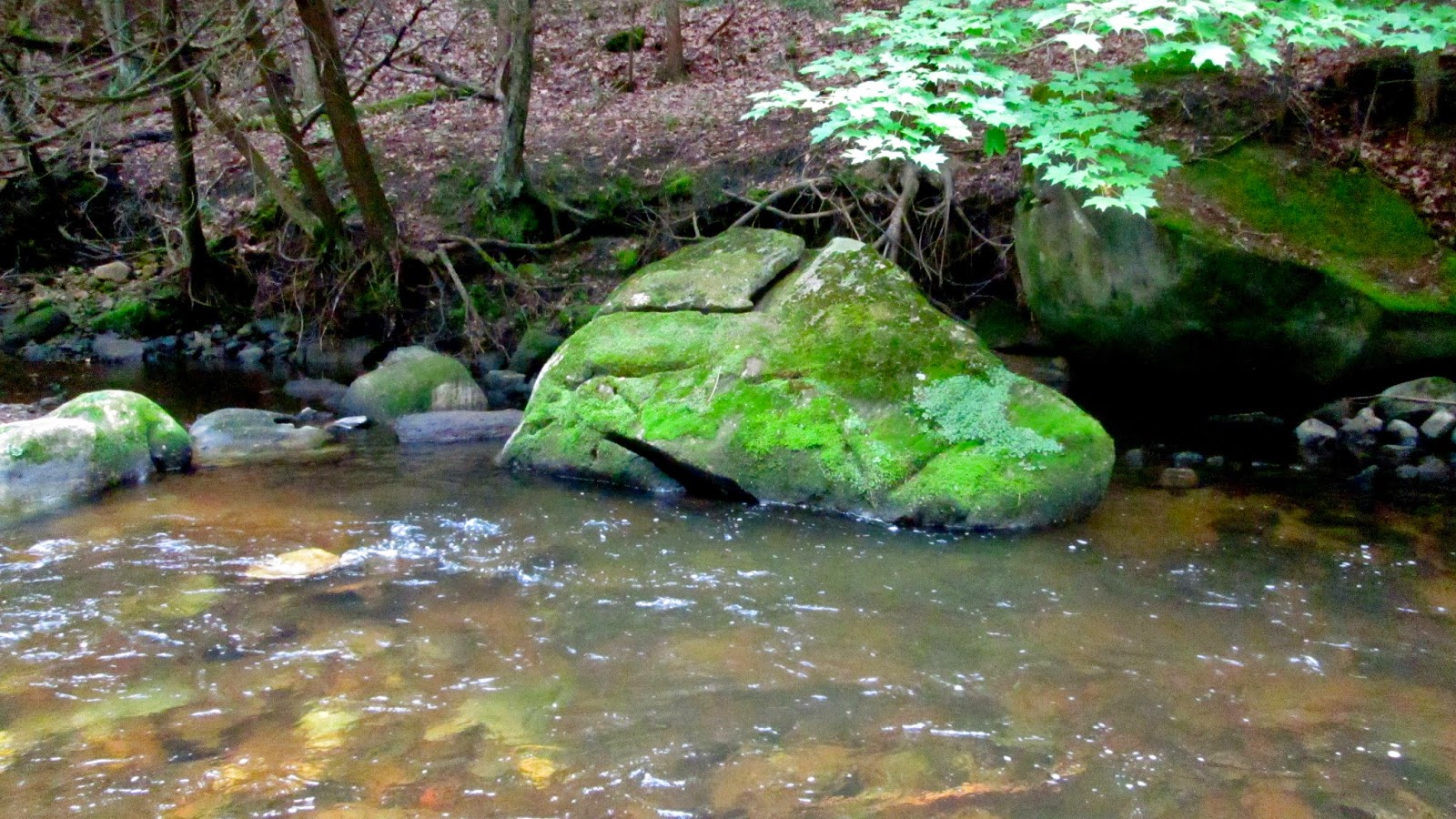 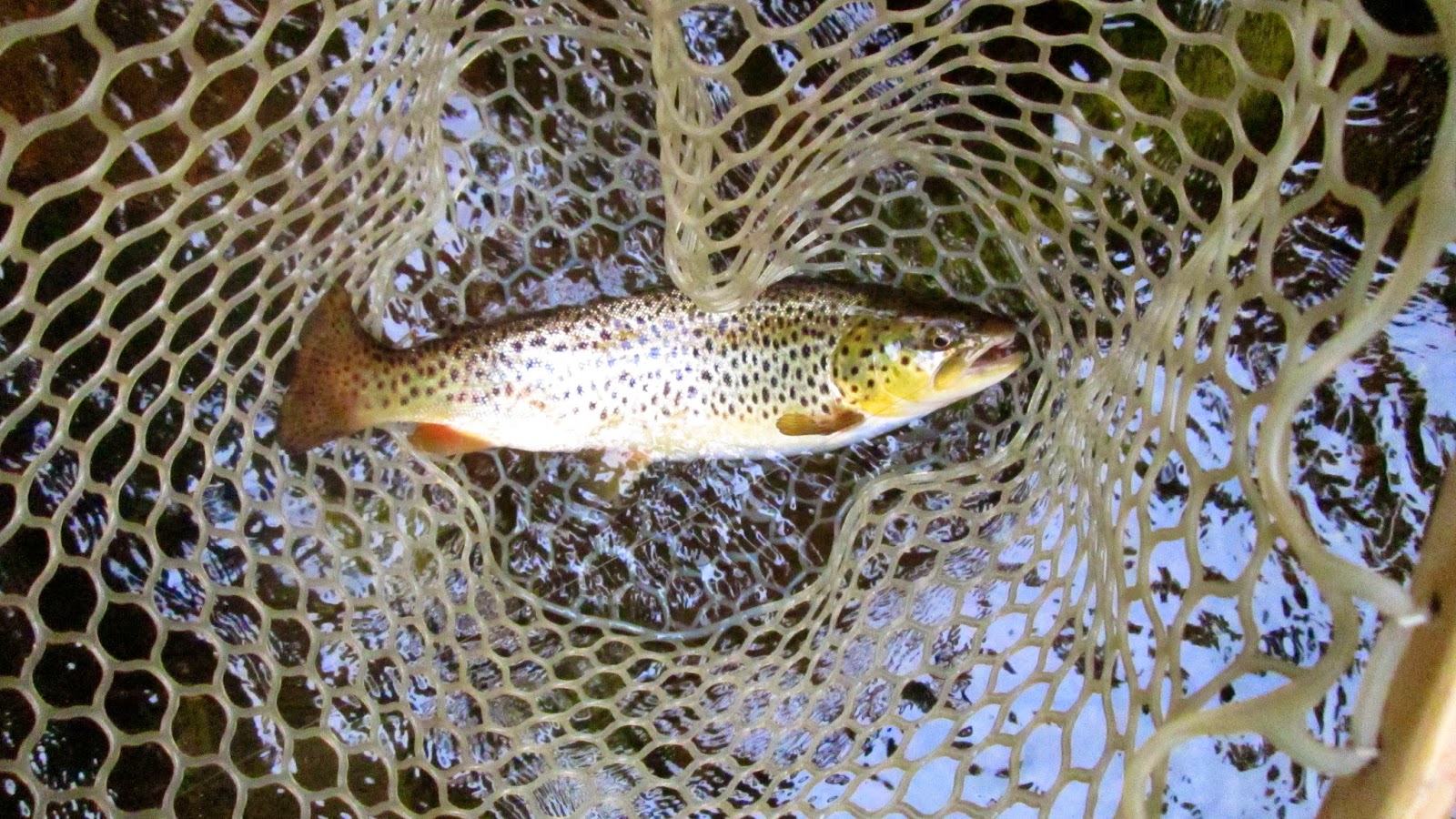 Posted by Patrick at 8:29 PM No comments:

As I was stowing away the tweed jackets in the former second bedroom in the cabin (now my off-season closet), I noticed a yellowing copy of the Phoenicia Times from around Memorial Day weekend of 2009.

Headline — "The Esopus is Dying"

It was about the discovery of didymo, more commonly known as "rock snot," in the river. (My editor loves "rock snot.")

It was there, all right. It was serious enough to jolt Sen. Charles Schumer out of his lair in Washington, D.C. to come to Boiceville to make a speech, something he is very good at. Nothing useful ever happens as a result, but boy, when you wind Chuck up, you get some speech.

In the normal course of events, the senator couldn't find the Esopus with both hands and a flashlight.

Anyhoo, the Portal discharges have been negligible this spring, and surprise, surprise — the river's in the best shape we've seen in ages.

Considerable work was done on Stony Clove Creek as well, which has to make a difference. Maybe Woodland Valley's next?

So on Thursday, May 29, I got tired catching robust but small browns, and the occasional silver bullet rainbow in the riffles, and headed upstream about a quarter of a mile from where the Woodland brook empties into the Esopus, at Herdman Road.

There were more goofy browns snapping at pretty much anything on the surface, but I clambered up to the big rocks that mark some deep runs and pockets and dunked a big nymph in — sort of a Prince, with some Mylar in the wing.

I don't know what the pattern is called, but I call it "The Fly of Death."

This is highly enjoyable fishing, when you cast over a boulder and then stand on tippy-toe to see what the hell is happening on the other side. Memo to indicator fishermen — they don't work very well when you can't see them.

I was rewarded with a nice fat brown in the 16 inch department that tore around, dove, and otherwise resisted my perfectly reasonable efforts to bring him in, get him in a net, photograph him, and then return him to the depths.

Sorry, that's terribly sexist. He or she to the depths.

I got another one of similar tonnage before it got too dark to see. Plus this spot is about where I broke my wrist 10 years ago, which required surgery. Every trip there brings back painful memories.

It got better the next morning. I arose at the crack of dawn, only to dive immediately back under the covers faster than a brown trout who has just been fooled by the Fly of Death. The temperature had fallen to 45 degrees overnight, and while I am a dedicated angler, there are limits to the dedication.

At the civilized hour of 9:30 a.m., therefore, adequately caffeinated and waffled (and baconed), I returned to the Herdman boulders, and this time the Fly of Death produced an honest-to-God big jumping leaping dancing rainbow trout of the sort that is supposed to be mostly gone from the Esopus.

Now, my arm measures 17 inches from the tip of the outstretched middle (or business) finger to the crook of the elbow, and this fish extended at least three inches beyond that. It was not easy to get a bead on him (or her), because he (or she) was very wriggly, and because there was no place to stand, and because I was trying to remove the FOD and return the magnificent fish to the water.

And between the giant landing net and the wide-angle lens, even the most monstrous fish looks, in my photos, like some lackluster hatchery specimen of medium size, the sort of trout that would just as soon eat garlic cheese or Del Monte brand canned corn on a treble hook as a cunningly presented Fly of Death.

So the Esopus is not dead. But the Phoenicia Times is. 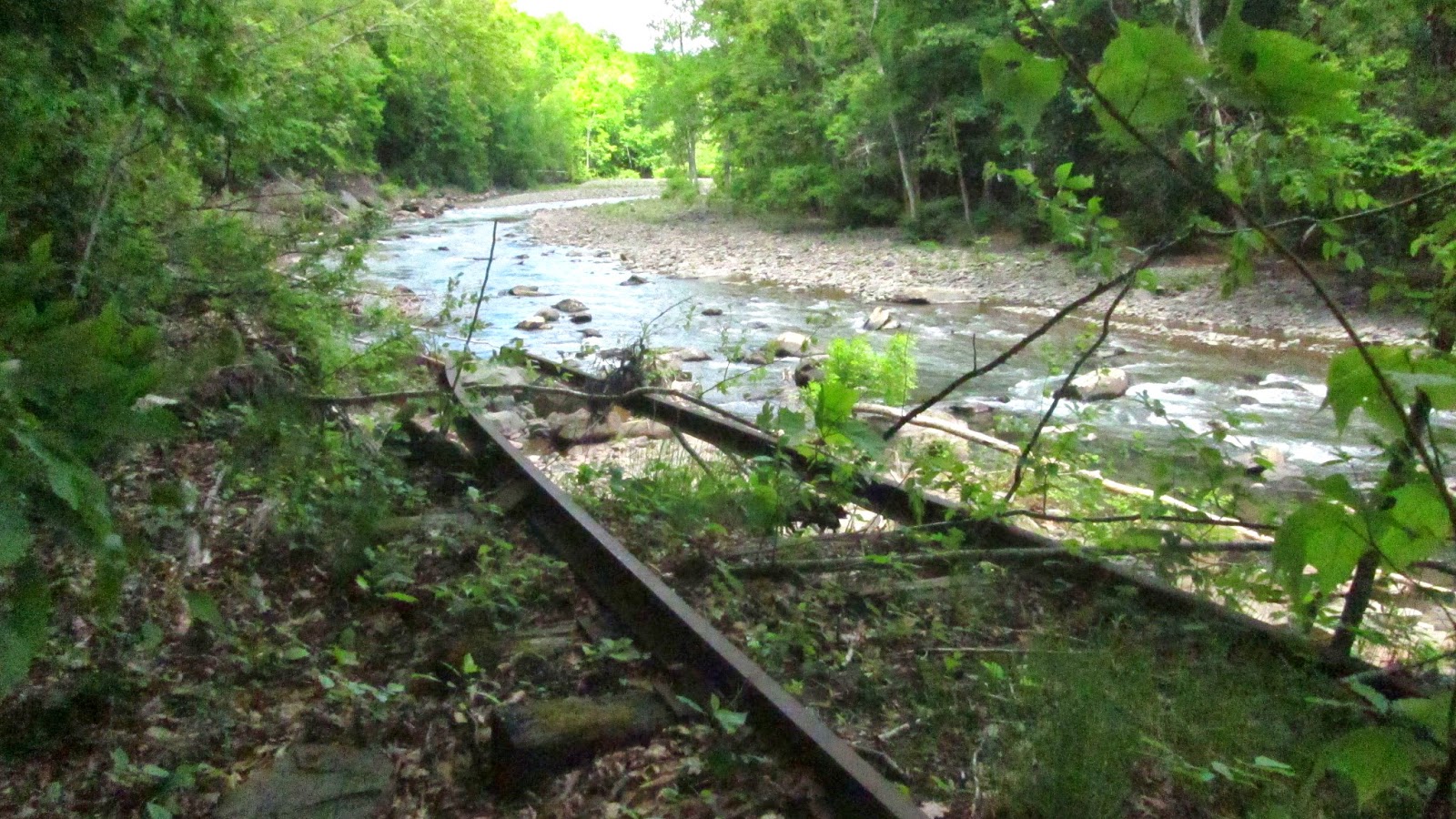 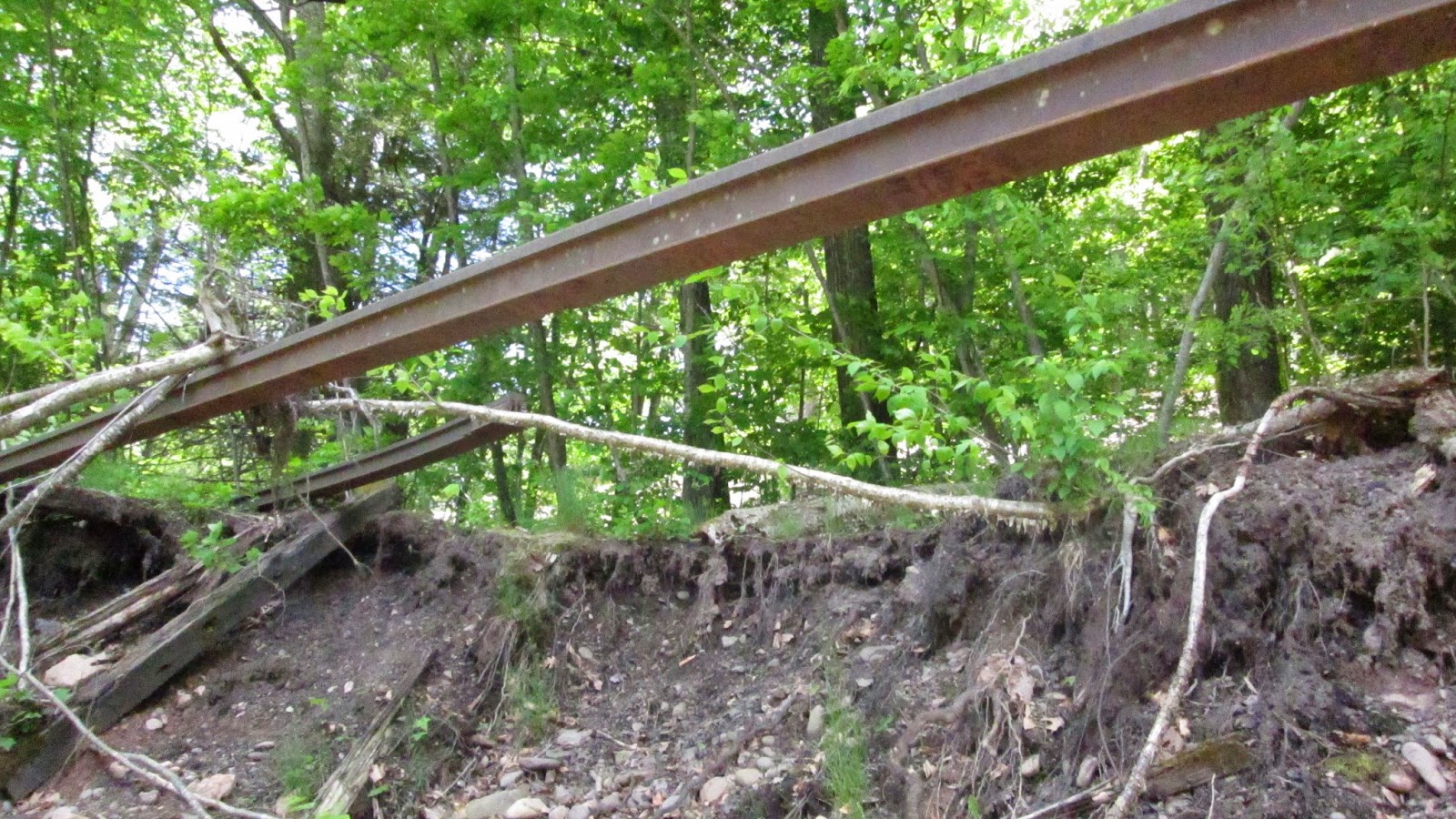 The rail line to nowhere. You'd almost think it was a federal project, perhaps championed by Sen. Charles Schumer. But no. This is flood damage. 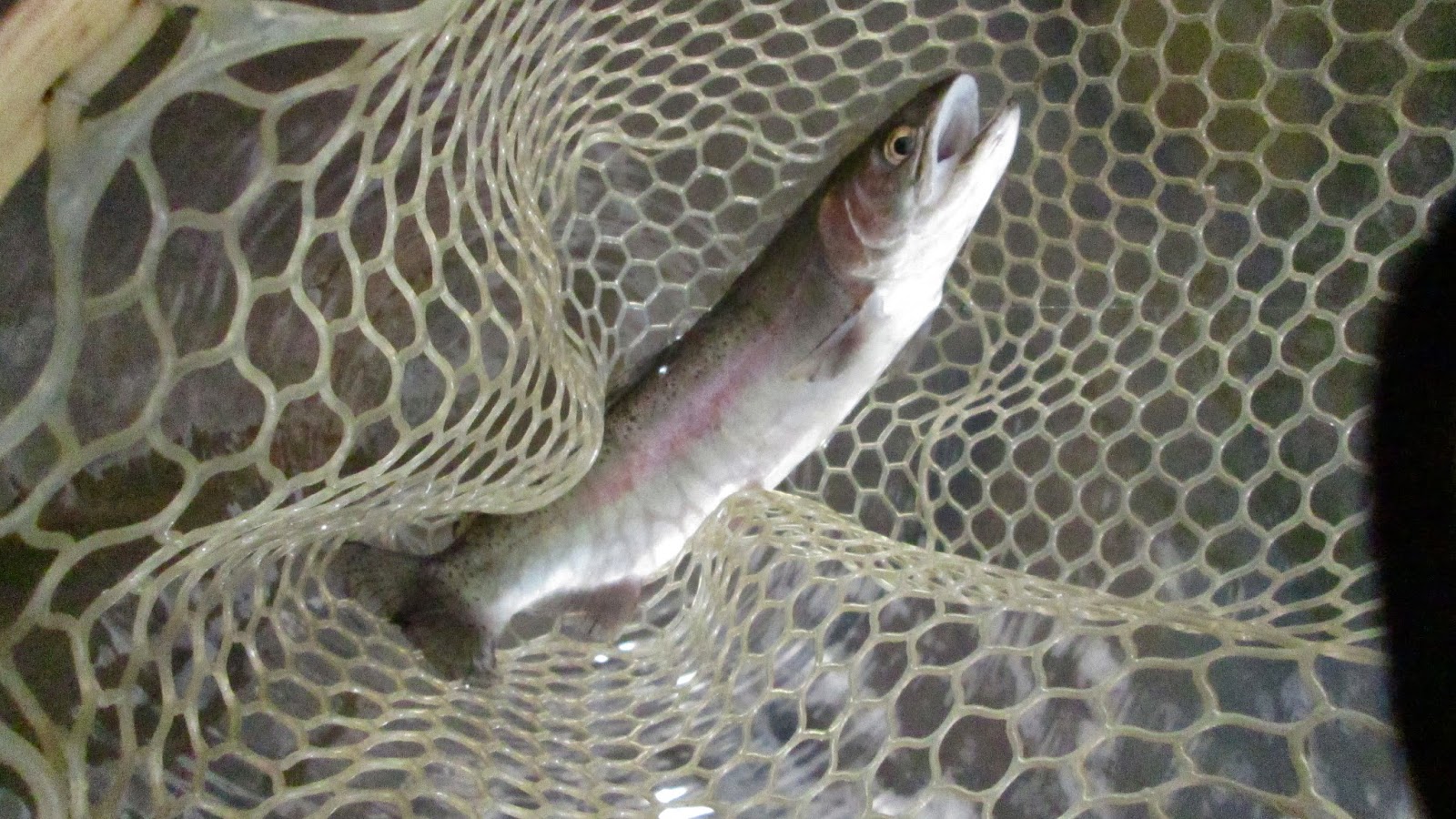 My big rainbow. I already explained about the wide-angle lens and the giant net. 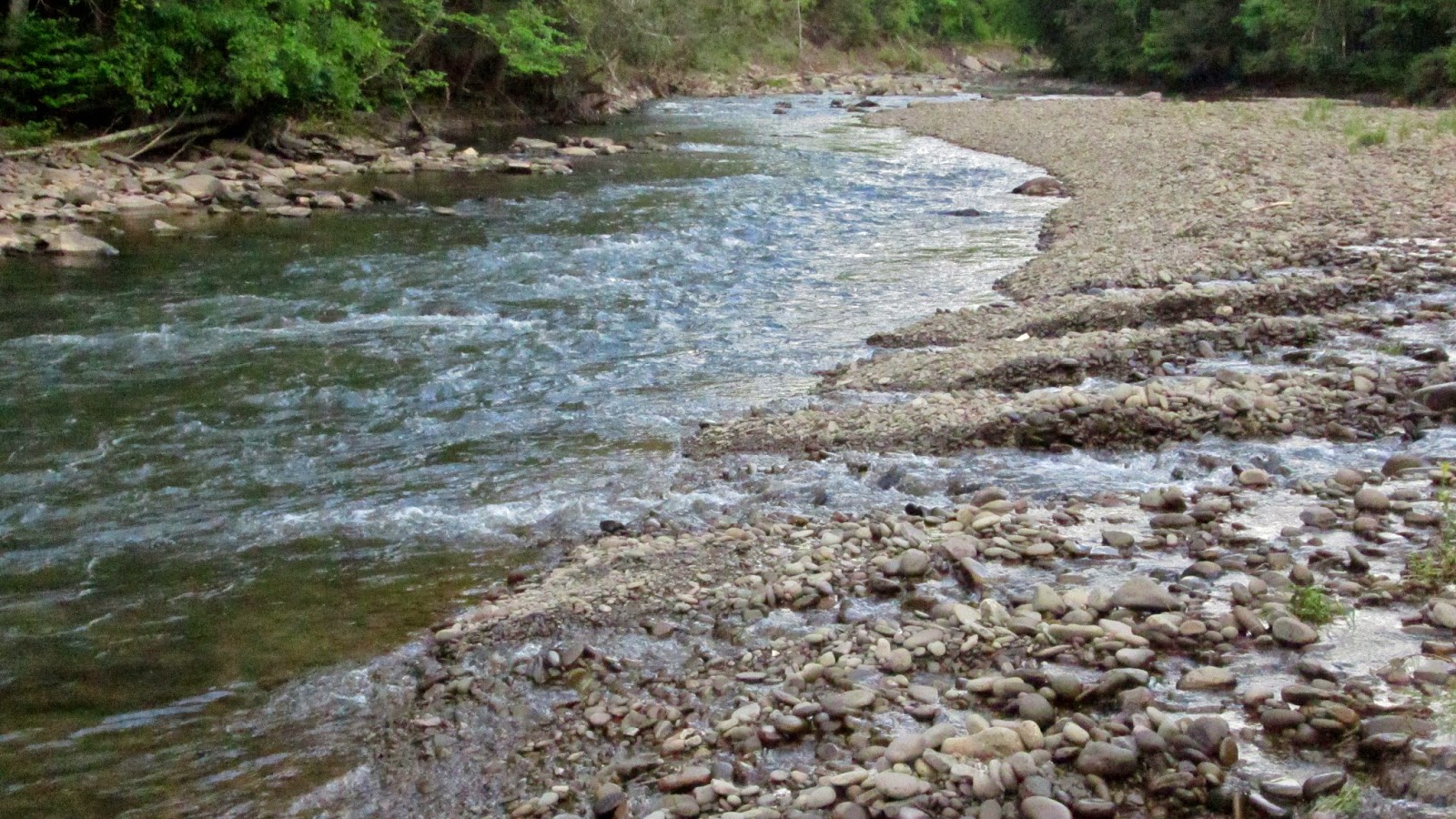 One of my favorite sights — trout hang around waiting to see what will float down from those rivulets. Kind of like the Automat for fish. 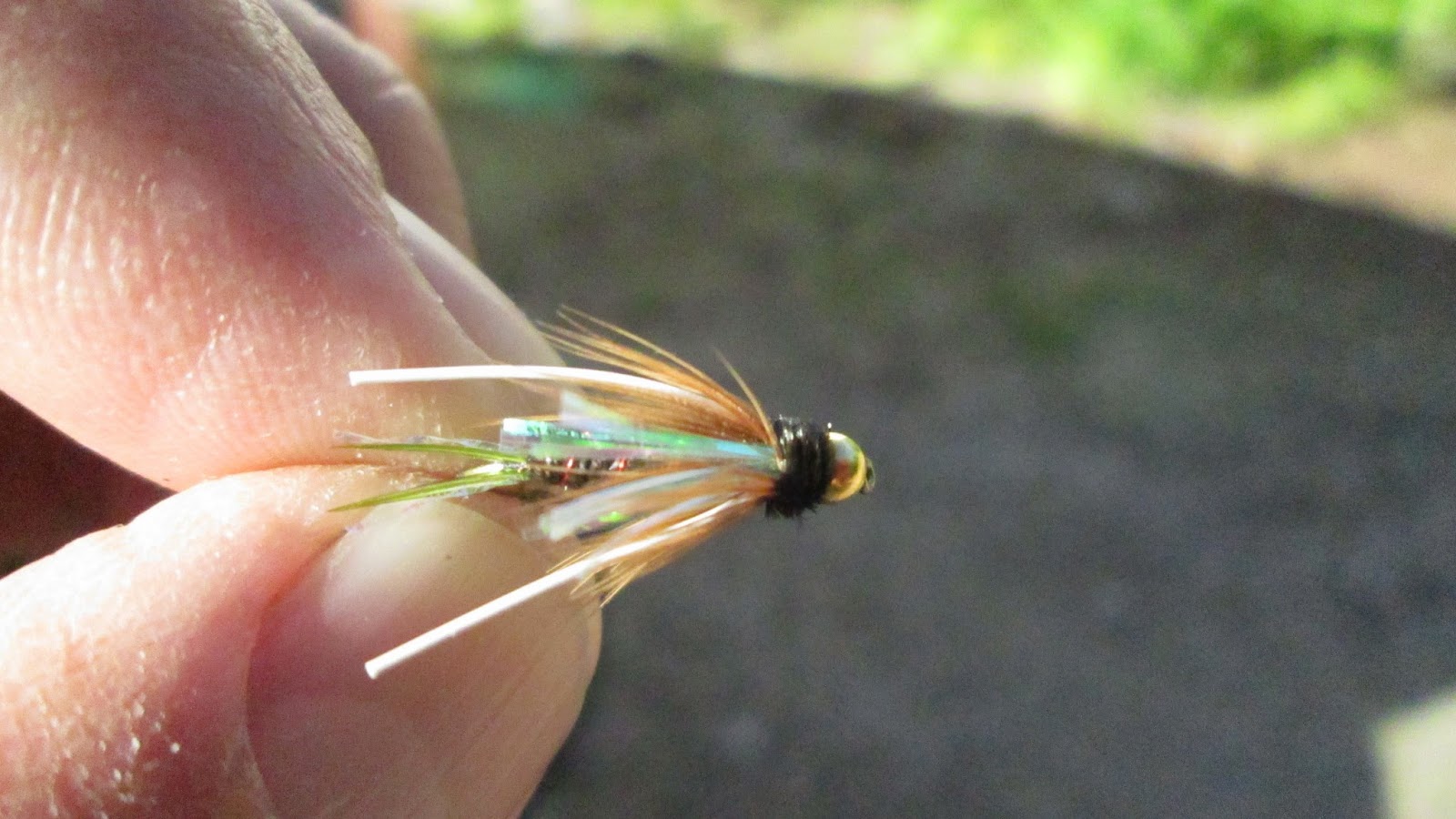 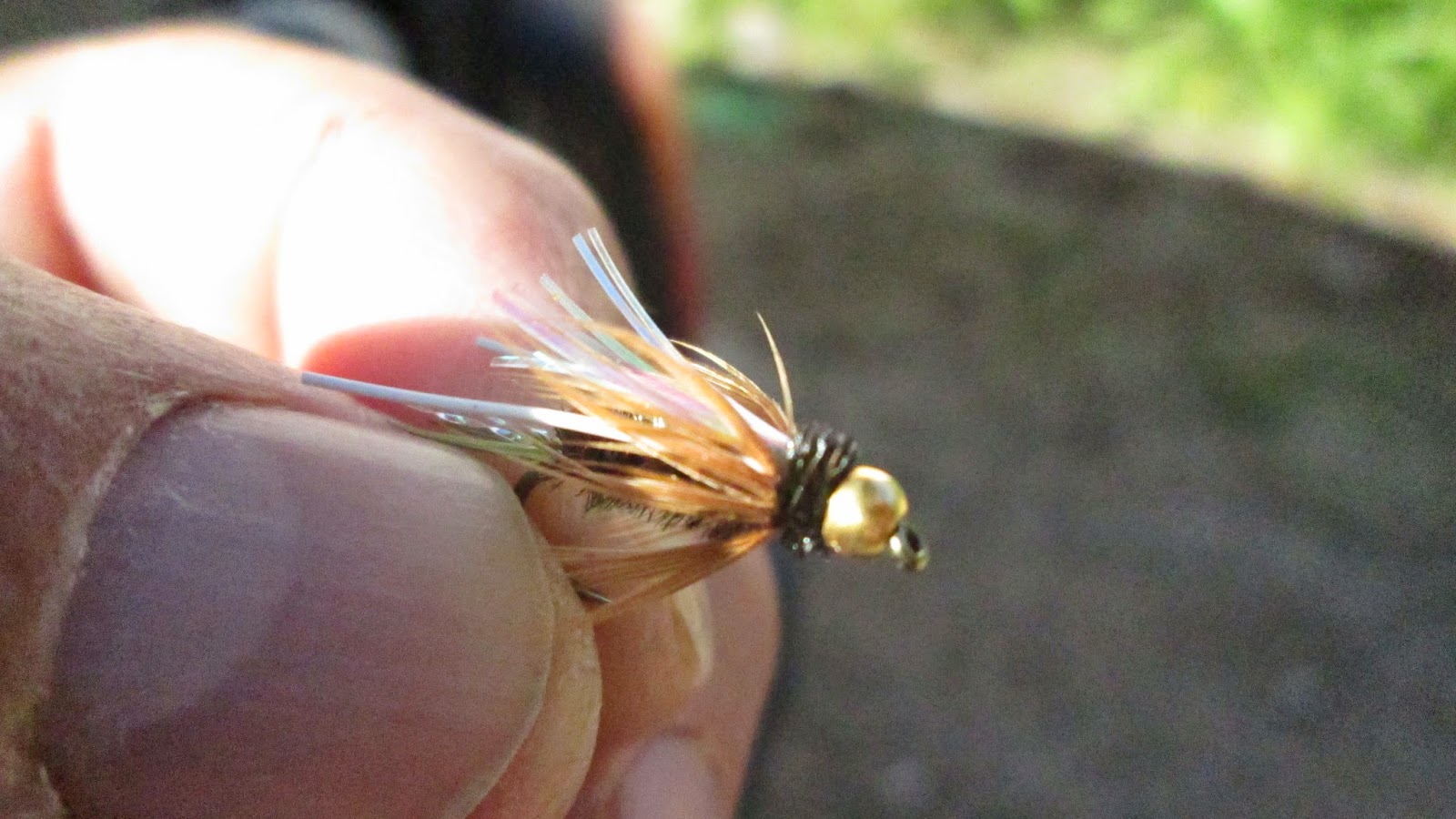 The Fly of Death 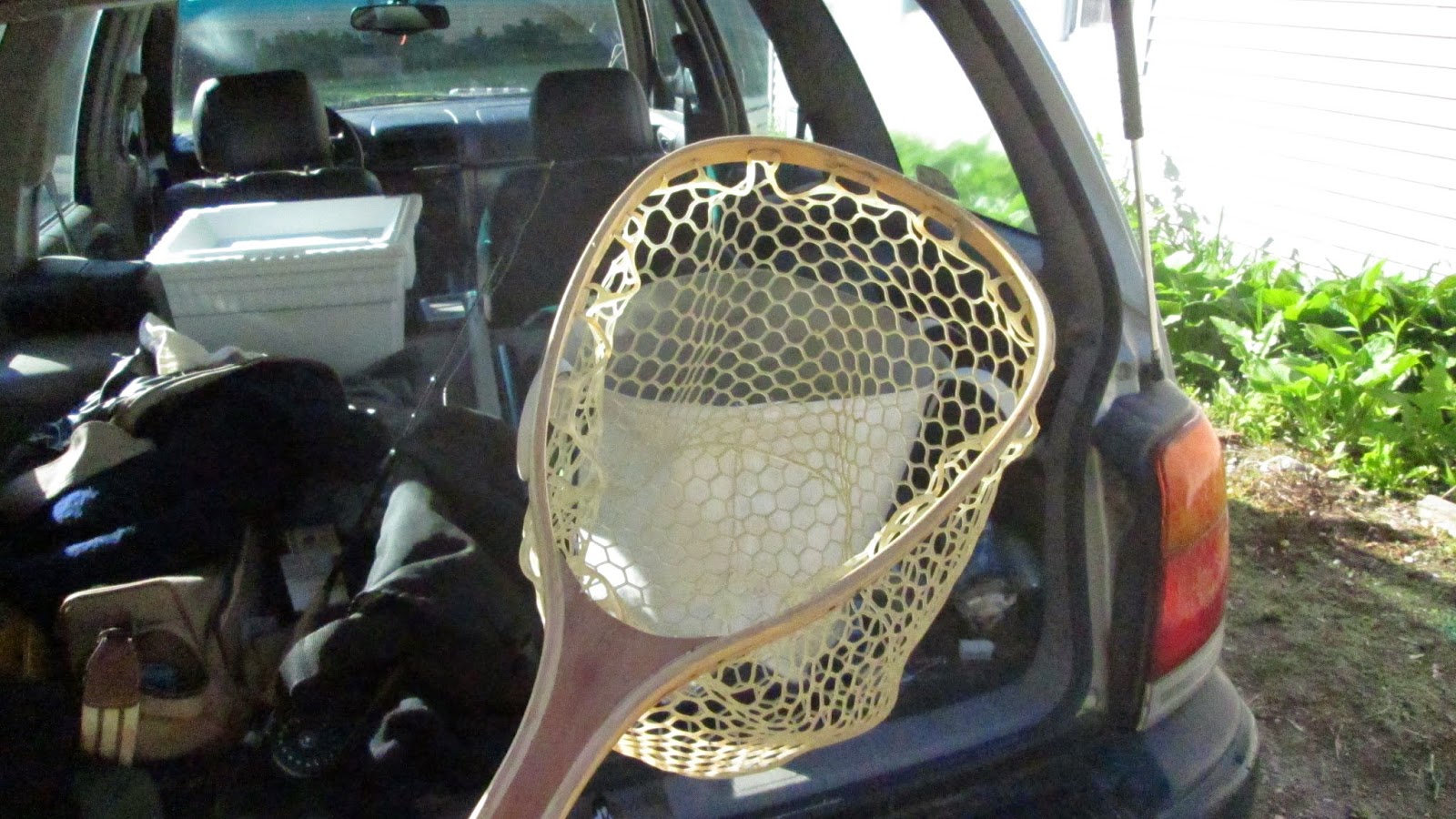 Posted by Patrick at 9:38 PM No comments: