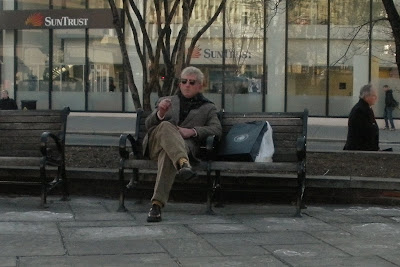 Time for a quick smoke in a little park opposite Brooks Bros. on Connecticut Ave. Swag from J. Press, JR Cigar and Borders, which seems to have abandoned the audio CD. A very feeble selection and lots of empty shelves, and I don't think it's just a post-Christmas situation.
Posted by Patrick at 2:26 PM 7 comments:

Lakeville to NoVa. Eight hours, 407 miles. Harrisburg, Pa. (known world-wide as the Epicenter of Evil) is always bad, but the last 15 miles - from Leesburg, Va. to McLean - is the worst.

On the plus side, little to no traffic most of the way, and a grand total of 75 cents in tolls. Try that on the Jersey Turnpike-Delaware Bridge-Baltimore Tunnel route. 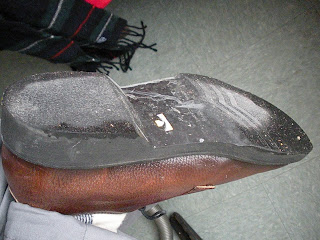 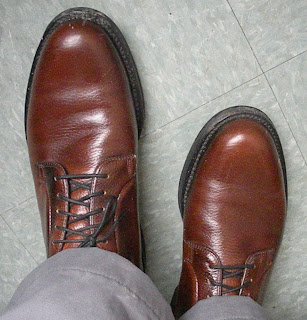 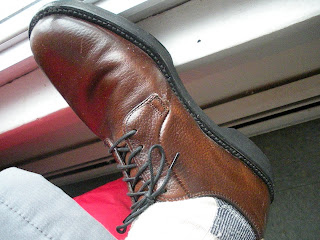 I have found my winter shoe - a pair of lightly used Walk-Overs, purchased from a fellow sufferer on Ask Andy.

Ask Andy's Trad forum has an ongoing thread called the "Trad Thrift Exchange." It is an excellent resource and 99.9 percent of my dealings with people have been very good. (I got ripped off by one guy but that was years ago now and we've all moved on. Even though he posted under the name Foghorn and he owes me either a big box of clothes or $200.)
Posted by Patrick at 10:49 AM No comments: 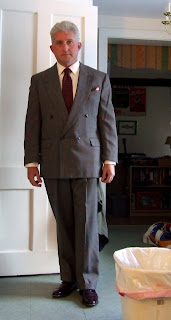 I am busy committing Trad heresy this week — digging out the double-breasted and darted, the pleated and somewhat spread in the collar.

Longwing thinks I look like Spencer Tracy. All things considered, I'll take it.

The suit is a Hickey Freeman I picked up on eBay for a song a few years ago and forgot about. I had the alterations lady twiddle it recently, and here we are.

Garbage can by Rubbermaid. Think of it as my nod to the "pylon poets."*

* described by the Poets' Graves website as a "group of 1930s left-wing poets including W. H. Auden, Stephen Spender, Cecil Day-Lewis and Louis MacNeice. They were known for their use of industrial imagery - which included references to trains, skyscrapers, factories, roads etc. The actual term 'pylon' was derived from Spender's 1933 poem The Pylons."

I cannot claim to have steeped myself in this school of poetry to any great extent. I think someone tried to make me read Spender in college, but even then I was a Spencer Tracy type and resisted. 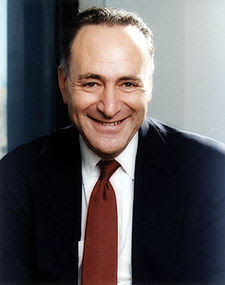 I'm tired of this guy. Sen. Charles Schumer (D-N.Y.), who has never done a blessed thing in his life except feed at the public trough. I mean, dedicate his life to public service. Sorry.

What kind of weenie gets a 1600 on his SATs, goes to Harvard and Harvard again (undergrad and law school) and then immediately runs for the state legislature?

And along the way he's become so convinced of his own personal marvelousness and the infallibility of his beliefs that anyone who dares disagree with Mr. Harvard wants to drag us back a couple of centuries.

Here is His Excellency, mouthing off to the president via "Good Morning America":

“My advice to the president is compromise when you can, but when people are being unreasonable, and we have hard right people who seem to be wanting to move us back to the 19th century, draw some lines in the sand and fight,” Schumer said. “Try to compromise first. Do everything you can, but don’t give up your core fundamental principles. I think the American people will respect that.”

Obama makes his first semi-sensible move in two years and to Mr. Harvard he's a sellout. Anyone who disagrees is unreasonable. Schumer's idea of compromise? He wins.

I'm still a registered Democrat, for obscure, atavistic reasons. I keep hoping that regular Dems will come to their senses and give the lefties that have hijacked the party the bum's Rush Limbaugh. (Ahahaha.)

Alas, I am not sanguine about this prospect. 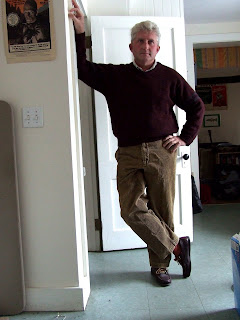 There continues to be less of me, and what remains is arranged better. I couldn't button these pants two months ago.
Martin Gordon cords, bought cheap from Sierra Trading Post and hemmed up by the local lady. LL Bean sweater, Orvis tattersall, Bean Signature mocs, and obnoxious orange argyle socks from SmartWool. Only the shoes were bought at retail (and even then I had a coupon).
All this thrift allows me to pay for the gym.
Posted by Patrick at 9:36 AM 2 comments:

Ha Ha, I Was Right

In January I called Time's Joe Klein a putz, for his blog posting of Jan. 25 which began with this:

Absolutely amazing poll results from CNN today about the $787 stimulus package: nearly three out of four Americans think the money has been wasted. On second thought, they may be right: it's been wasted on them. Indeed, the largest single item in the package--$288 billion--is tax relief for 95% of the American public. This money is that magical $60 to $80 per month you've been finding in your paycheck since last spring. Not a life changing amount, but helpful in paying the bills.
http://swampland.blogs.time.com/2010/01/25/too-dumb-to-thrive/#ixzz0dpGiY714
(Emphasis added.)
I wrote then:

Yes, Joe, I found the extra money helpful. And I am also paying taxes on it, as I discovered when I did my 1040 the other day. Matter of fact, I owe the feds about $600 - oddly enough, almost the precise amount of the "tax relief."
And yesterday, The Associated Press, always at the head of the pack, discovered this phenomenon:

WASHINGTON (AP) — About 13.4 million taxpayers may be getting unexpected tax bills because they were awarded too much money under President Barack Obama's Making Work Pay tax credit, a government audit said Thursday.

The tax credit, which expires Jan. 1, was designed to increase take-home pay by about $8 a week through new tax withholding tables. The credit was capped at $400 for individuals and $800 for married couples filing jointly.

However, the credit put millions of taxpayers at risk for not having enough taxes withheld from their paychecks, resulting in a tax bill when they file their returns, said the audit by J. Russell George, the Treasury inspector general for tax administration. 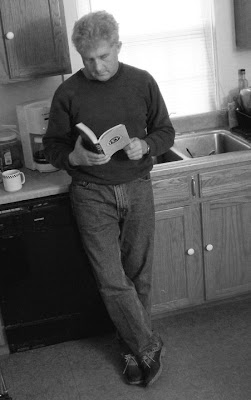 No name filthy blue sweatshirt, Levis Slim Fit that are still too long (why can't they make a 29 inch inseam with a 36 inch waist, or better yet a 35?), LL Bean slip-ons, pretending to read The Ivy Look.
Posted by Patrick at 4:46 PM 4 comments: 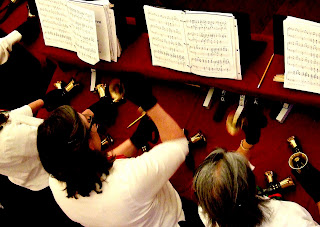 Look at a crowd shot in some exotic locale in the national Geographic magazine. There's always someone doing something in a bit of a blur. It's a trademark style.
This is in the ballpark. The Bell Choir at the Salisbury Congregational Church Sunday, Dec. 12. I wish there had been just a little more light in the place.
Posted by Patrick at 10:05 AM No comments: 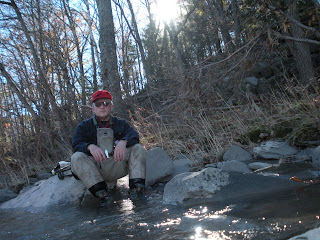 It's warm, it stays put and it just might keep some drunken oaf from shooting me.

Terry Cowgill likes to take photos of cars with lots of bumper stickers, which always are of the hippie-dippy persuasion.

Well, across the Hudson in the hardscrabble atmosphere of Ulster County, N.Y., it's a different story: 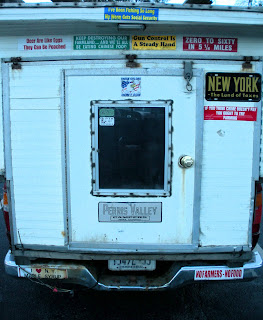 This guy received style points for the wicker creel, but lost them for a) whipping the water and b) zero patience.

Late season fishing, in high, turbid flows, means working flies around likely lies and doing so blind. Just banging a few casts into a run and then moving on isn't going to cut it. 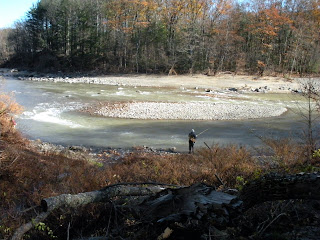 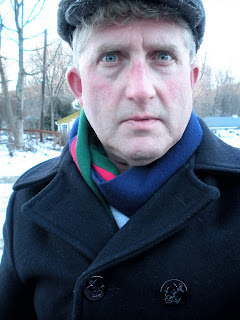 "I'd walk half a mile for a cup of convenience store coffee that tastes like drywall!" And I did.
That shiny new Cuisinart percolator conked out after a month or so. But I found a drip maker at the Bargain Barn for five bucks.

That one morning without a coffee maker of any kind was hell, however. No caffeine. Have to smoke outside. Starter motor in the car shit the bed, too. WTF all around.

I really hate it when things don't work. There — I said it.
Posted by Patrick at 4:04 PM 3 comments:

Return of the Heavy Tweed Suit 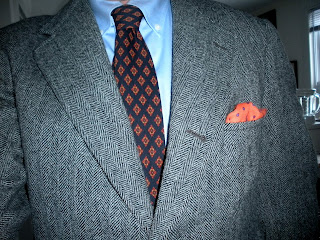 You know it's winter when the Heavy Tweed Suit comes out of the closet. It's a Brooks Brothers, 1970s going by lapel width.
The joke I always make is that I could go skiing in this thing. With a thick scarf, gloves and silk long johns, I can be outside in complete comfort.
And we're keeping the newsroom chilly in an effort to save money, so it's handy there too. 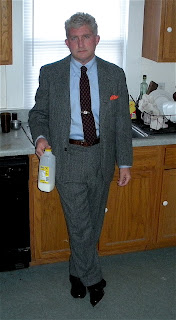 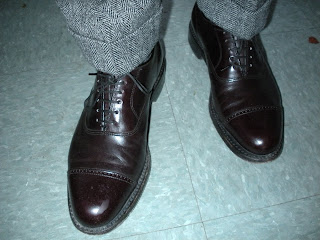 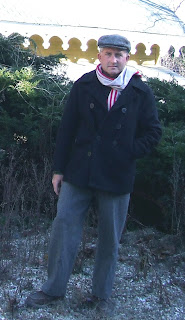 Pea coat from a guy in New Jersey who apparently has the Aladdin's Cave of closets. Schoolboy muffler from a guy in New York who regularly finds cool clobber and sells it at a reasonable price. Filson boots that were damn near out of the box new; the owner just didn't like them and sold them to me for a song. Heavy Woolrich wool trousers, the scratchy kind, long johns required, from eBay. Underneath a Viyella shirt, also eBay and the old 60/40 cotton/wool blend, not today's wimpy 80/20.
If you bought all this gear new it would run north of a grand, easy. Cost me maybe $150 all told, and much of that was shipping.
Hat and gloves (not shown) I actually bought in a store. On sale, but in a store. Cost almost as much as everything else combined.
Posted by Patrick at 3:02 PM 2 comments: 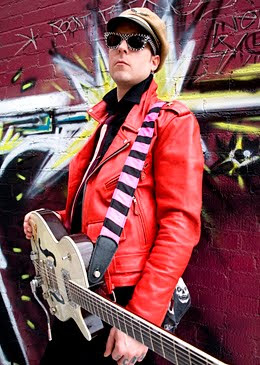 And most people will hate this record, which is enough for me to recommend it.
Posted by Patrick at 8:02 AM No comments:

The Need for Tweed 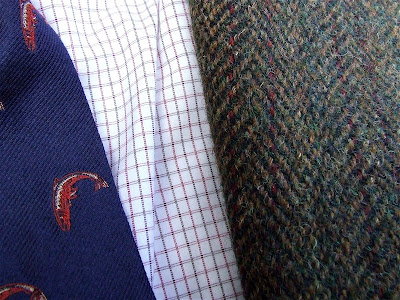 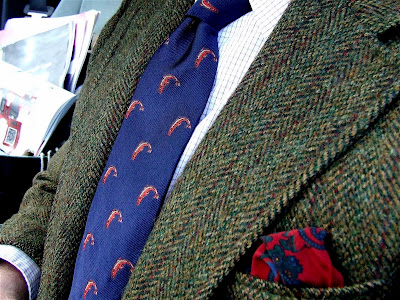 A heavy tweed jacket doubles as outerwear, ya know. Add a pair of long johns and the need for great cumbersome overcoats is alleviated.
Until it gets really cold.
Posted by Patrick at 2:51 PM 6 comments:

"Nine Songs" (2004) is a weird little pseudo-porn flick about two dull young people who hang around at rock and roll shows and screw a lot. In between the filmmakers throw in a lot of stuff about Antarctica. There is some boring dialogue that's probably supposed to be existential, some okay-to-mediocre live footage of bands like The Von Bondies and Black Rebel Motorcycle Club, and some explicit sex scenes between the cute girl and the rather greasy guy.

If there's a point to it beyond titillation, or promoting the bands (most of whom have faded into oblivion now, six years later) I can't see it.

And if you want a fuck flick you can easily find one that doesn't have long glacier sequences.

Two coils for the sex, but it's really not much of a show. 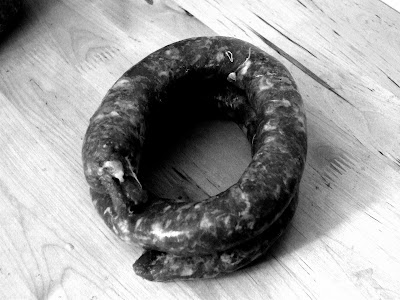 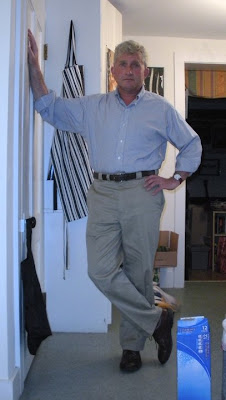 The gym routine is starting to pay off. I clocked in at 165 lbs. this morning, and I couldn't pray my way into these 34 x 29 chinos a month ago.

That's right, 34 waist. (They're actually a hair under 35, I measured, but it's the perception that counts.)

I am now officially Pudgy, as opposed to a Fat Slob.

Some time back I bought a couple of Lands End slim-fit shirts because they were so cheap. I tried one on and immediately rejected it. But now...
Posted by Patrick at 5:34 PM 4 comments: